Passaggio at the Tropicana Express Casino in Laughlin, NV 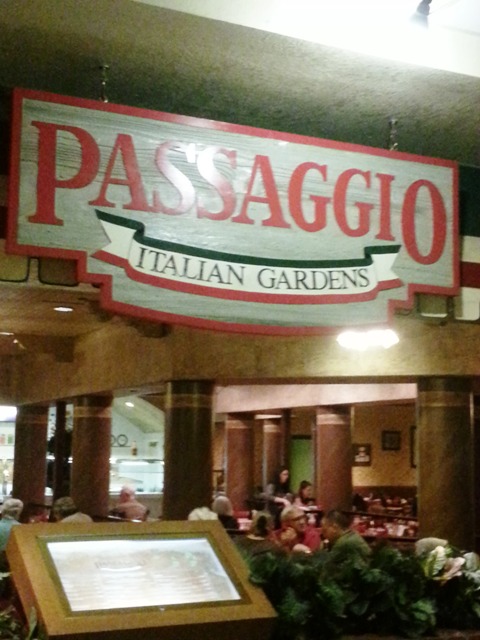 Location:  Tropicana Express Casino in Laughlin Nevada
Date: A Monday at the end of November 2012

Stopped in the Tropicana to grab dinner one Monday evening.  The Steakhouse (a favorite of ours) isn't open on Monday, we didn't feel like a Buffet or Carnegie's dining car so we decided to give Passaggio another shot*.  After the last experience we hadn't been back.  For the value of just $6.99 for the Bottomless Pasta bowl plus soup, salad bar, and bread sticks we thought it was worth trying again.

The experience didn't start off wonderfully.  The restaurant was only half full yet the hostess told us "the next seating was at 6" so it would be 15-20 minutes wait.

Next seating?  What was this a pre-dinner fixed course chef presentation?  Seemed like there were an awful lot of seats available.

We stepped back and were discussing going somewhere else or going play a machine or get a drink.  A few minutes later another couple approached the hostess.  She noticed we were still in the hallway so then she waved us over and said she could seat us now and took us in before them.  Then she got them a table.

Once seated a server dropped off the menus and a basket of the bread sticks.  The sticks are fresh, hot and very delicious.  They will also fill you up fast.   He asked if we wanted anything to drink and we said we were going to order a carafe of the wine (a special).  He said he would bring us water and our server would be right with us to get that.   This is something that occurs from time to time in the restaurants in Laughlin, we assume because certain staff members can't serve the alcohol.  It is still a minor annoyance.   Twice our real waiter passed by the table and assured us he would be right with us.  The place wasn't real busy but he apparently was.  After about 10 minutes he finally came to the table apologizing to take our drink order.  We had both long before decided to go with the special, $6.99 bottomless pasta bowl.  In fact, by the time he had come we had discussed the various options with a couple at the table across from us who recommended what sauce was good. 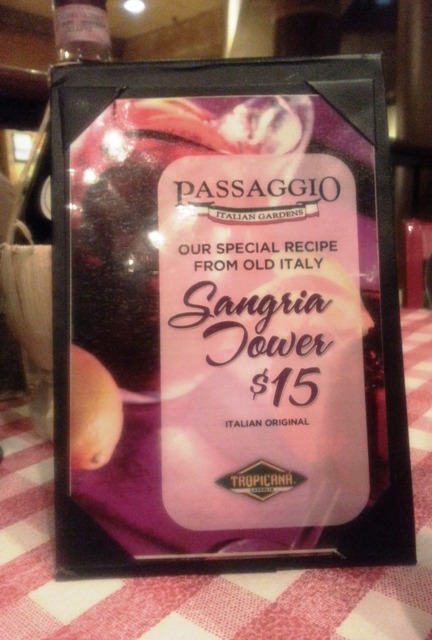 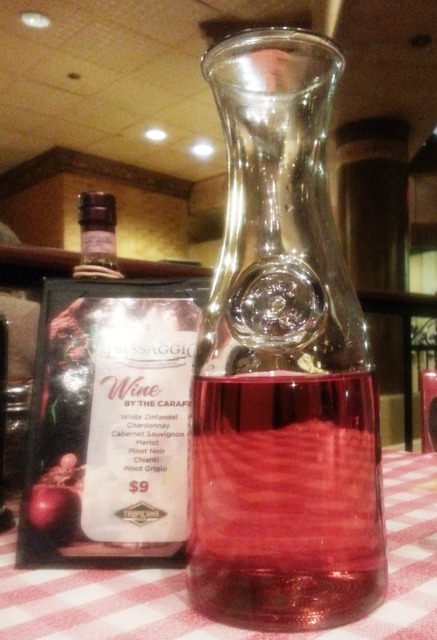 We did order a carafe of the wine (a full carafe for $9).  This is a very good deal, though if memory serves us right a year ago when we visited it was just $7.   They also have a Sangria Tower special for $15.  One of us ordered the Rigatoni with the Bolognese sauce, and the other one got the Linguine with the Creamy Basil.

The soups were good.  The minestrone was fine, the other option the Italian Wedding Soup (as we call it) was very good, much better than the last time we had visited.  Perhaps a couple more mini-meatballs in it would be nice, we only found 1.   Soup spoons were in short supply apparently.  There are two soup stations up by the salad bar where you serve yourself.  So two baskets of soup spoons were there, yet only 1 spoon.  We patiently waited for our server to come back by or someone to refill the soup spoon baskets.  Finally after far too long he did and we got another second spoon. 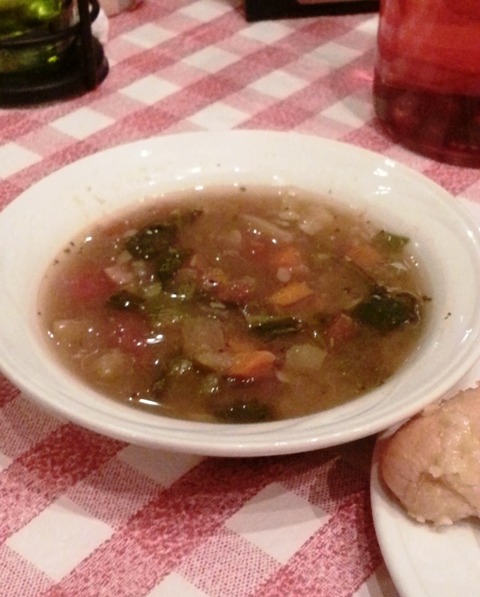 The salad bar was small but fresh and good as well.  We had finished our soup and salad when our server appeared again and asked what kind of pasta we wanted with the Bolognese sauce.  Hadn't he written it down with the order, which should of already been put in?

A new couple came and sat at the table across from us as we had finished our salads.  They were waited on promptly and ordered.   It took nearly 15 minutes after he had cleared our salad plates for him to bring out the pasta.  In fact, he came with a tray that included the other couples order as well.  So even though we had been seated way before them our orders came out at the same time.  It was only after he had left we noticed that the Creamy Basil was on Rigatoni just as the Bolognese was.  It should of been on Linguine.   Not wanting to even wait for him to come by again we just ate it as is.
The Bolognese was ok for one of us when crushed red pepper and Parmesan was added. The other one of us didn't like it at all.  It was declared to have a burnt taste.   Both of us thought the Creamy Basil was good, even though it was on the wrong pasta.   Our server never did come by to ask how we were doing.

Service at Passaggio is very slow and spotty.  In fact, from our table we saw another couple waiting at the hostess stand to be seated for a long time (no hostess).  Finally the man called out to the waiter and asked if anyone could seat them.  So the waiter grabbed menus and sat them at a table.   The table across from us with 6 people waited forever for their server to come and take their order (apologizing as well).  We were very filled up from the one bowl of pasta, the bread sticks and the soup/salad so did not even want more pasta (bottomless).  They give you a good size portion in one bowl.    For two meals, the carafe of wine, tax and tip we got out of there for under 30 dollars.

The bottomless pasta bowl is $9.99 without the players card so go grab one for free if you don't have one.     According to their website at the end of November 2012 this special is offered for just $6.99 Sunday - Tuesday with your Trop Advantage Card.

The bottomless pasta bowl is an excellent value and we were satisfied with the food, though not the service. What is a nice little spot for a very inexpensive dinner is slightly marred by the lack of attentiveness by the staff.

We skipped dessert this time as we had filled up on the food and wine.
*We had visited Passaggio only one other time in the past, over a year ago.  It wasn't great so we hadn't gone back.   This time the food was good and most likely it won't be a year before we go back again.

The pizza's looked delicious (several tables were ordering them) and would be good to get with a carafe and bread sticks.

They have a wide variety of other Italian style dishes on the menu as well.  They also offer a Twin Lobster Tail dinner in Passaggio for just $19.99 with your Trop Advantage Card.  Available Monday & Tuesday only.  Again, check ahead before you go with any of the specials as they are subject to change.

According to their website Passaggio is open:
Sunday, Monday, & Tuesday: 5 p.m. - 10 p.m.
Friday & Saturday: 5 p.m. - 11 p.m.
Closed Wednesday and Thursday
Be sure to check ahead if you plan to go as this is subject to change.

Send us your review if you have dined at Passaggio and would like to share your experience.