Another Review of the Outback Steakhouse in Laughlin, NV

Restaurant review by a loyal reader, verified by LaughlinBuzz.Com

----
We had an early dinner at the Outback Steakhouse before taking in a movie.  My wife had a Wallaby Darned drink.  This is their version of a Peach Bellini.  She enjoyed it.  I had a Fosters draft.

We wanted a light appetizer and selected the Crab and Avocado stack.  She loved it and said it had a fresh, light taste.  I wasn't as excited about it but haven't really enjoyed Avocado in the past.  The app was served with a small amount of tortilla chips which seemed slightly greasy to me, but she said were fine.  I would of ordered the Seared Ahi Tuna, a personal favorite.   She chose the 6 oz. Victoria's Filet with a baked potato.  I ordered the 1/2 rack of Ribs with the Aussie fries.  Both of us had the Pecan Chopped Bleu Cheese Premium Salad.  The salads were delicious and both meals were very good.

Ribs were incredibly tender, cooked just right.  My only complaint would be that the Barbecue sauce had a bit too much spice.  But this is just a personal opinion, other people may like it that way.  They did throw the ribs on top of the fries on a too small plate.  I'd rather not have the sauce drip onto my fries.   Her steak was cooked perfectly and was a good cut.  Staff was friendly and service was good, no complaints.  We got to sit in the portion of the restaurant that is outside the main section.  This overlooks the Aquarius Casino floor so we could see and hear all the action.   We enjoyed our meal, the atmosphere, and the prices were fair. We would certainly visit again.
----

Visit our main site for the latest news and updates in Laughlin -  LaughlinBuzz.Com

If you have a review you would like to share, send it to us at laughlinbuzz@gmail.com
Be sure to include any pictures you may have.
Posted by Laughlin Buzz at 7:48 PM No comments:

Rare Rain and Clouds in the Desert - Laughlin, Nevada

Haven't seen much of the sun in two days.  Some shots of the cloudy, drizzly, dark day in Laughlin, NV and on the River Walk.  Temperatures were still in the high 50-s to low 60's range.  Best of all very little wind. 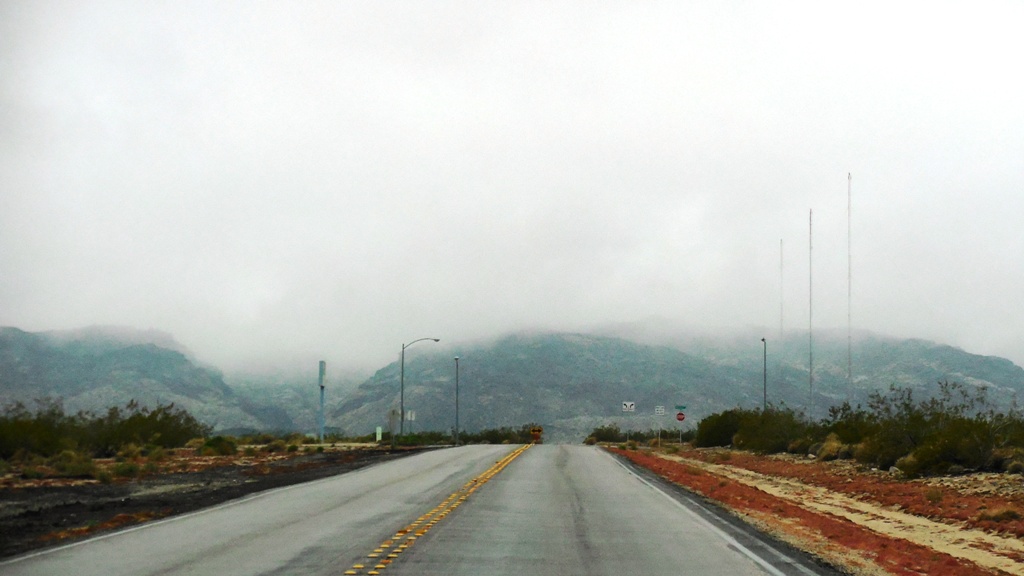 On the way to Casino Drive in Laughlin

Posted by Laughlin Buzz at 7:05 PM No comments:

Lil Elmo and the Cosmos at the Taste of Laughlin Festival 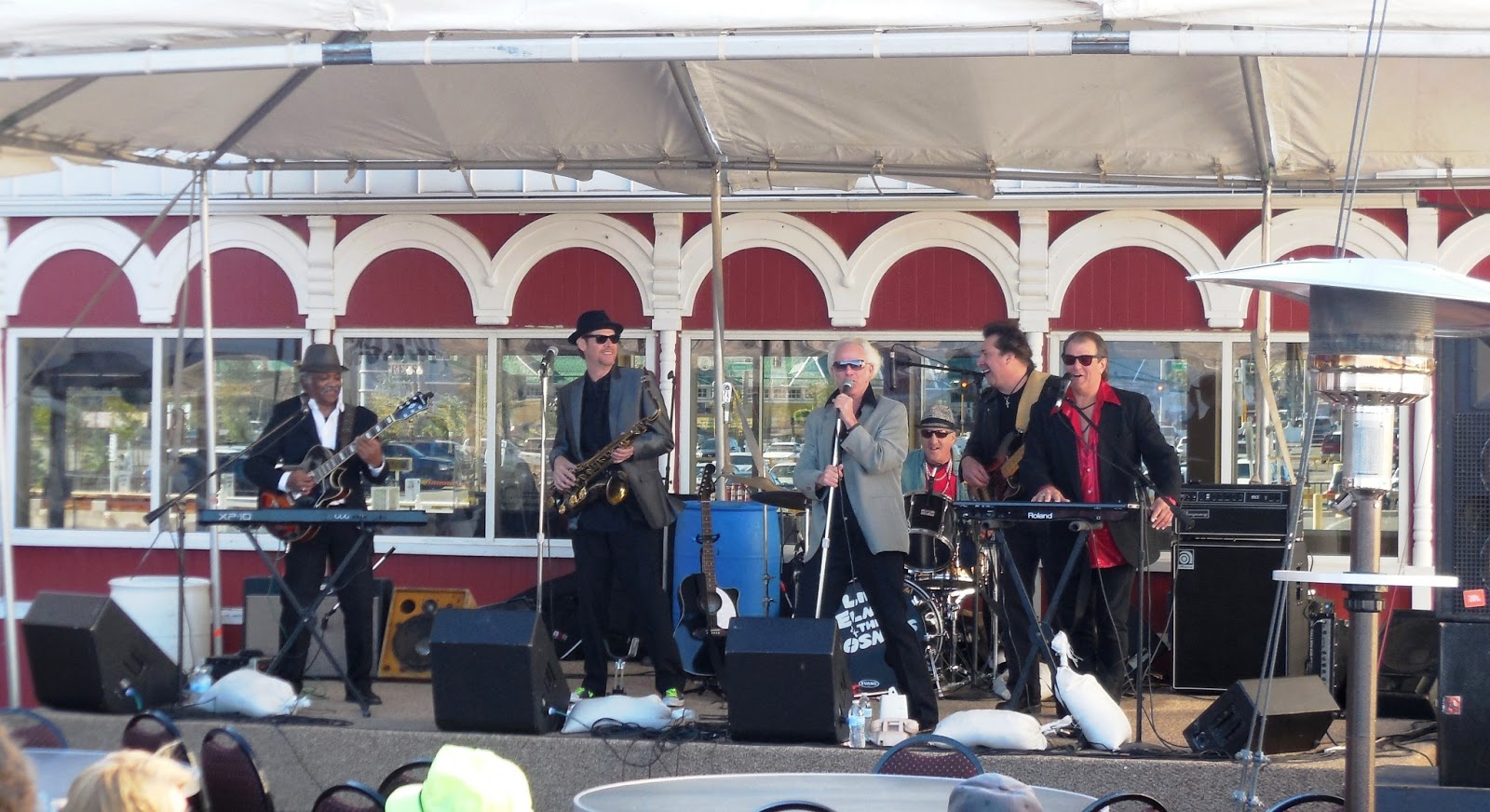 Lil Elmo and the Cosmos performed on the River Walk at the Taste of Laughlin Festival in Laughlin, NV on January 18-20th, 2013.  They did a great show over three days.   The video below includes a few pics and video clips of their performance.

This took place outdoors right along the Colorado River between the Colorado Belle and Edgewater Casinos.  It was  fairly windy weekend as you can see and hear in part of the video clips. 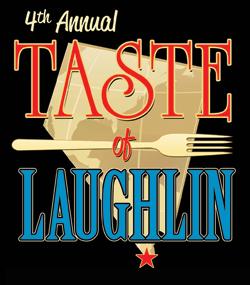 Midway through the clip there is even an unexpected rescue from the Colorado Belle moat.  Everyone was relieved it wasn't a Koi being fished out.  Especially at a food festival!


Clips and Video were taken by LaughlinBuzz.Com and posted with permission of Lil Elmo and the Cosmos


Posted by Laughlin Buzz at 9:55 PM No comments: 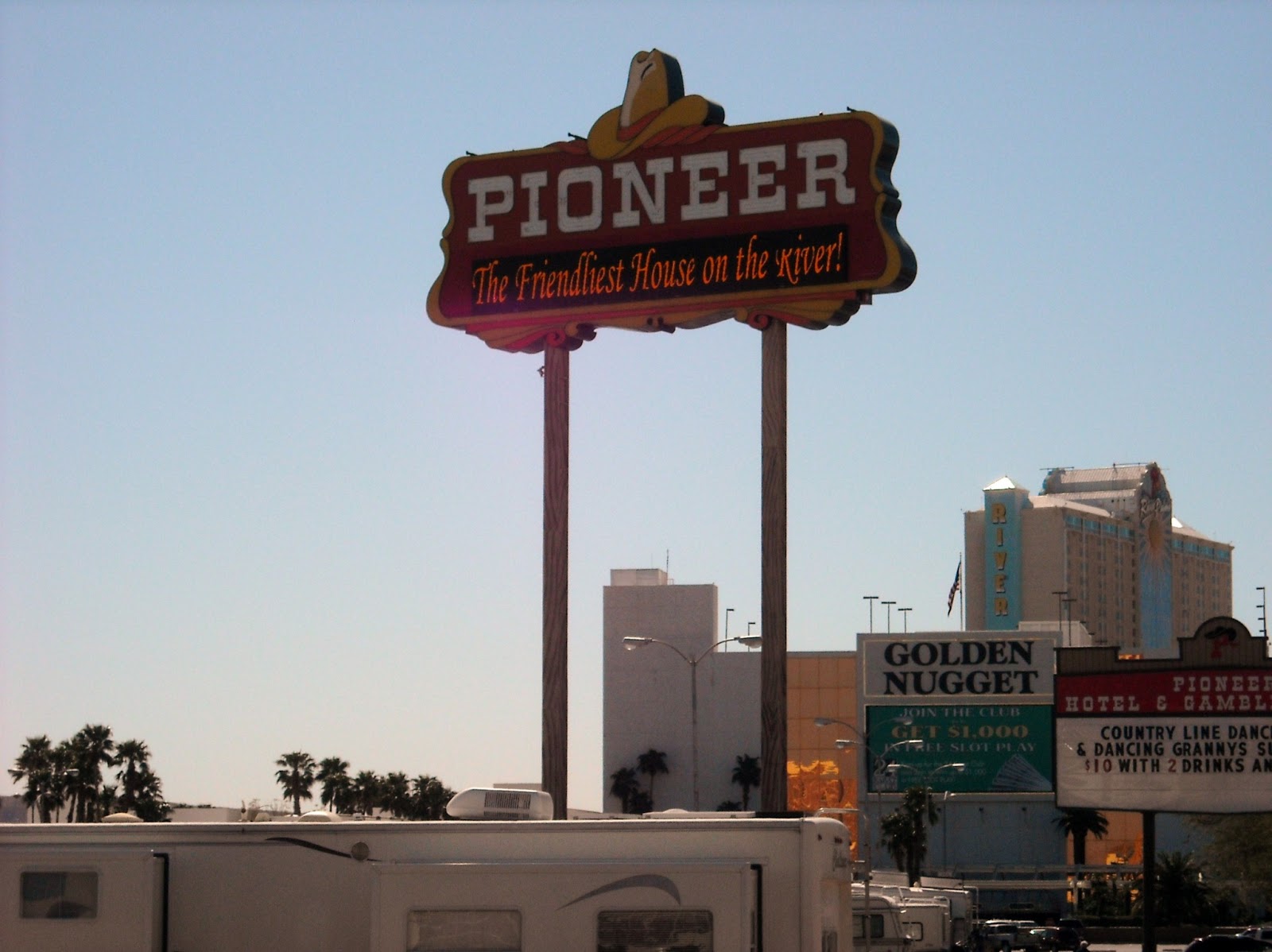 Restaurant - Breakfast review of the Breakfast Buffet at the Pioneer Hotel and Casino in Laughlin, NV

One morning we were out for a quick breakfast and instead of going to Harlow's again (in the Golden Nugget) we decided to give the Boarding House a try.    (See reviews for Harlow's here)

Update:  Harlows is now closed and has changed to ClaimJumper.

We haven't yet tried any food at the Pioneer and had heard good and not so good reviews.  Arrived just before 9am (weekday) and very few people in the Casino.   The visit didn't get off to a great start when we had to wait to be seated for a very long time.  There were two other couples behind us waiting as well.  No host or even server was seen anywhere.  We were on the verge of giving up and leaving when one of the men in line went into the restaurant and found the hostess to seat everyone. 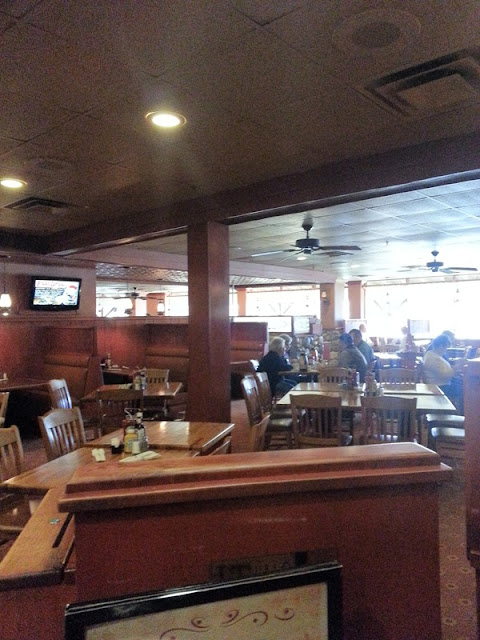 They have a fairly extensive menu for lunch and dinner and a smaller selection of items for Breakfast.  The breakfast buffet is just $7.95 and includes coffee so we chose to try it.

Although it had a few good items, overall it was disappointing.  For the price one shouldn't really complain (the old you get what you pay for), however, keeping food fresh and hot shouldn't be negotiable even on a buffet.

We had several people in our party so we tried just about everything on the Buffet.

The best part was the omelet station.  The chef cooked them to order with many options to include whatever you want in them.  These were very good, not and fresh and if you go for the Breakfast Buffet it is the best choice you can make.

For meat lovers, the Sausage was good, nice country style sausage.  The bacon was good too, crisp and not a soggy mess in a bin like you see in some buffets.

The sausage gravy was also good.  However, the biscuits to put the gravy on were not.  They were not fresh at all and even the gravy on them did little to change that.

The hash browns were good as were the sliced breakfast potatoes with peppers/onion in them.   The only problem with these were on the first trip to the buffet they weren't replacing them quickly enough and the hash browns were slightly cold before they added a new tray.

There was a fair selection of fruit and it was fresh.

Coffee was good, and they gave you a whole pot on the table so you didn't need to wait for refills. 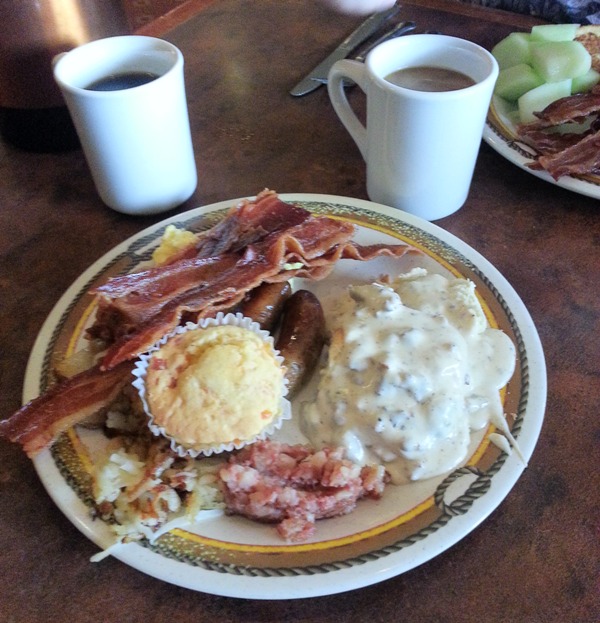 -Corned beef has was average at best.   Not very hot.
-The mini Belgian waffles and French Toast would of been good had they been warm as well.   No pancakes.  No toast.
-There was some sort of corn bread cheese muffin, which was completely dry and tasteless.
-In the pastry section there were Apple Danishes, Mini-Bagels, Small Cinnamon rolls, and 3 types of small donuts.  Unfortunately all of these were very dry, not fresh at all.  No means to toast the bagel either.
-Two kinds of scrambled eggs, one plain and one with peppers in them.  Both were had a very bland consistency and were lukewarm.  One person compared them to powdered eggs in quality. 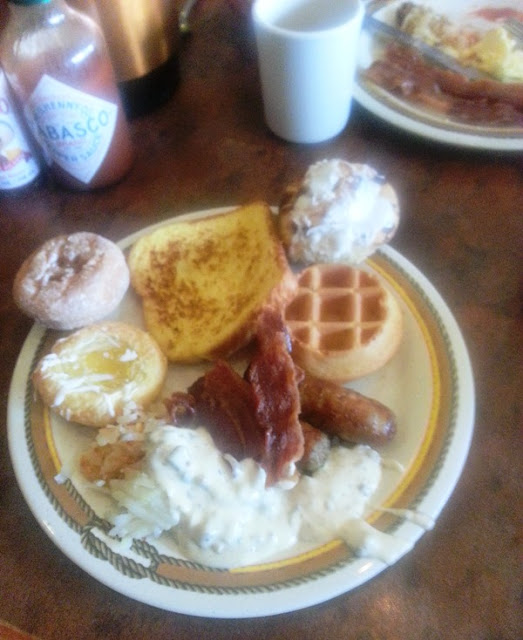 The restaurant and buffet were clean enough.  Staff and service was ok once we managed to get seated.  The inside of the Boarding House is fairly spacious and keeping with the Cowboy-Western theme of the Pioneer.  We did have a nice view of the Colorado River over the River Walk from the booth along the outer wall.

We probably will never try this Breakfast Buffet again or recommend it at this point.  Perhaps if they strive to keep the food hotter on the buffet and to provide fresh items this would change.  Hopefully this experience is not a example of how the food and quality is from the regular menu and specials they offer.

Shot about a week ago (January 2013) from the River Walk in Laughlin, NV.   Plane came slow and low on along the Colorado River just over Bullhead City, Arizona, and then increased altitude and took off.  Perhaps some type of Military plane?

Posted by Laughlin Buzz at 6:13 PM No comments:

Was a cool afternoon on the River with a bit of wind but sunny.   The wildlife (especially the birds) loved it.  The water was low and the river was filled with gulls, ducks, and others.  We even saw this crane just past the Riverside Casino section of the RiverWalk.. 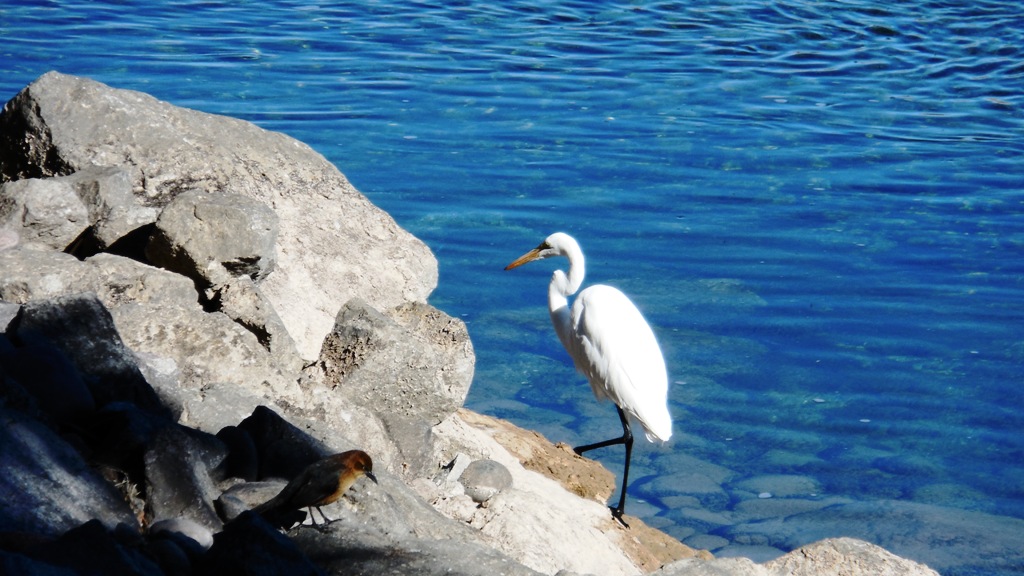 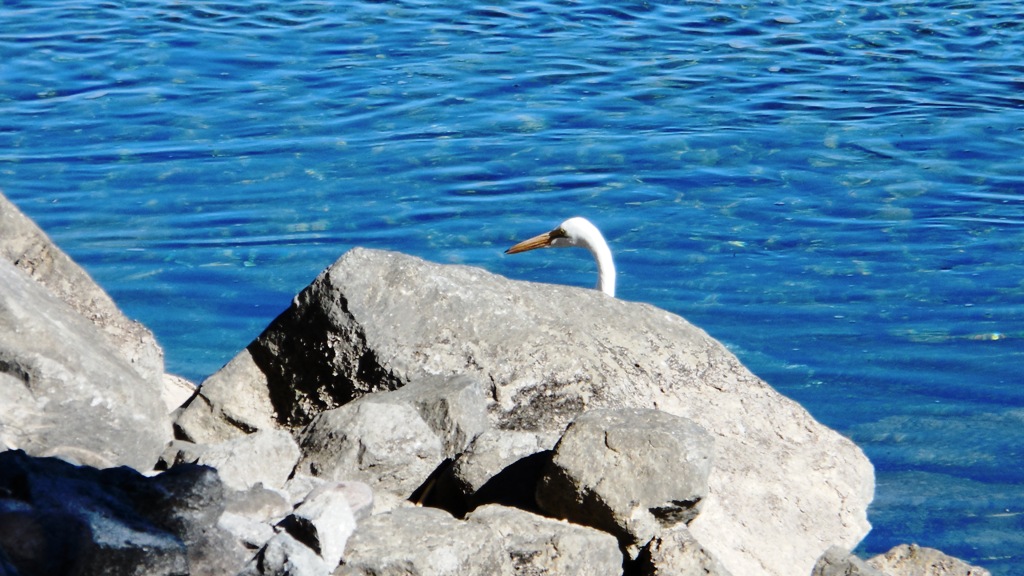 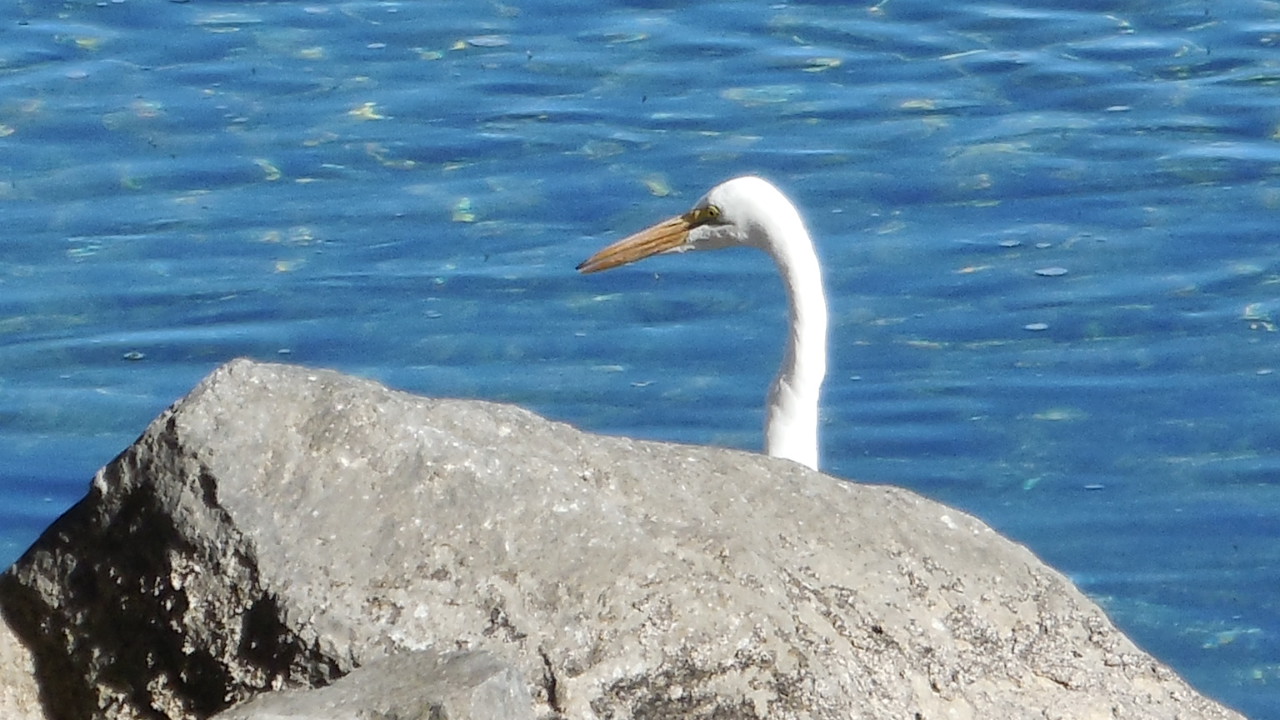 As we were walking back down from the Riverside something buzzed past us and landed in the bush and flowers right in front of us.  We were lucky enough to capture a couple pictures of this hummingbird as it darted from flower to flower.

Posted by Laughlin Buzz at 6:11 PM No comments:

Posted by Laughlin Buzz at 9:23 AM No comments:

The Beach in Laughlin and The Colorado Belle Paddle Wheel

Water on the Colorado River has been very low all week.  The other day we took a walk along the River Walk in Laughlin, Nevada and noticed the normally thin beach area along the river was very wide.  It was possible to walk right up under the Colorado Belle "paddlewheel". 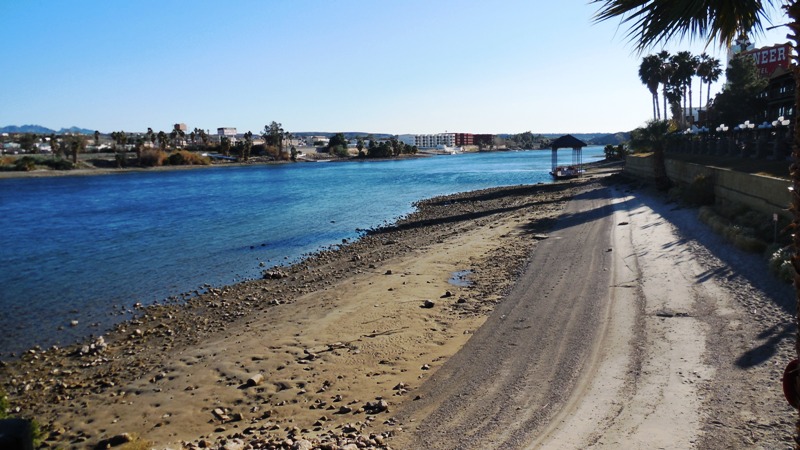 See more photos from the Laughlin area on
laughlinbuzz.com

Posted by Laughlin Buzz at 2:57 PM No comments: