** New Updates are posted at the end of this article

Earlier in the month we shared news that Guy Fieri and Caesars Entertainment planned to create several new restaurants including one in Laughlin.   Today, in a press release, it said plans are to open 3 new restaurants by the end of the year (2014) at: 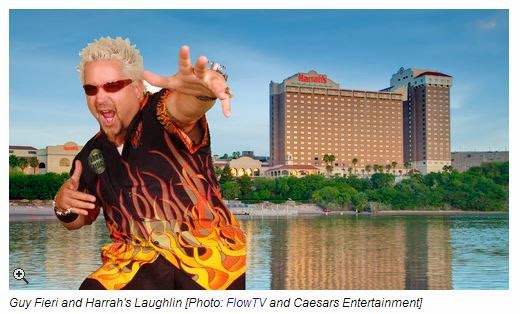 LAS VEGAS, May 28, 2014 /PRNewswire/ -- Caesars Entertainment today announced the company is expanding its relationship with chef, restaurateur, New York Times best-selling author and Emmy award-winning television host, Guy Fieri. On the heels of the opening of Guy Fieri's Vegas Kitchen & Bar at The Quad Resort & Casino in Las Vegas, Fieri is now set to launch three new concepts with the gaming-hospitality company in Atlantic City, Baltimore and Laughlin, Nevada.
"Guy's restaurants and menus are innovative, fun and his guests enjoy exceptional service combined with an entertaining experience. His style of hospitality could not be a better fit for the desires of our guests," said Tom Jenkin, Caesars Entertainment Global President of Destination Markets. "Guy's restaurant with us in Las Vegas has received rave reviews and we're thrilled to extend our partnership with him so that our guests across the country can enjoy his cuisine."
The three new restaurants, all slated to open later this year, will be located at Bally's Atlantic City, Horseshoe Baltimore and Harrah's Laughlin. Each concept will be unique and the menu adapted to highlight a regional focus. Fieri's Bally's Atlantic City location will offer a new unique twist on the classic steakhouse while Horseshoe Baltimore and Harrah's Laughlin will feature some of Guy's most popular dishes along with regional favorites.
"It is an honor to play with a championship team," said Fieri. "Getting the opportunity to open one restaurant with Caesars was great, but opening three more, in the same year, is amazing!"
For more information about Guy Fieri's Vegas Kitchen & Bar and to learn more about Fieri's latest concepts with Caesars, visit Caesars.com.
----
We are looking forward to hearing the location within Harrah's Laughlin and what the menu (regional focus) will be.  Either way it is good news to hear of a new, higher profile dining spot coming to the area. 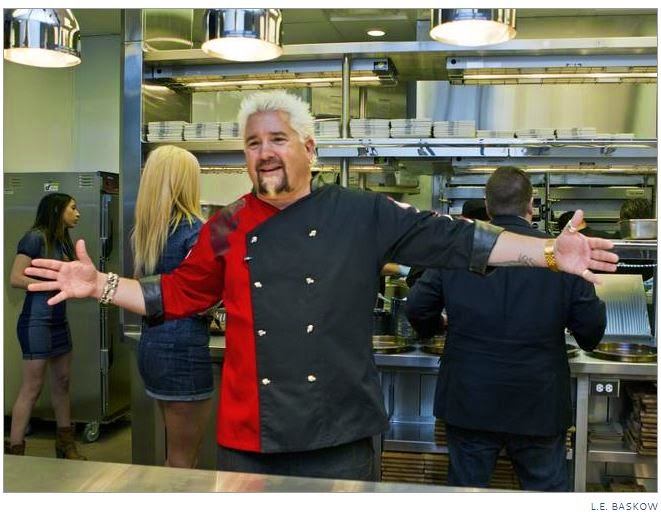 About Guy Fieri
Guy Fieri, chef, restaurateur, New York Times Best-Selling author and Emmy Award-winning host began his love affair with food at the age of ten, selling soft pretzels from a three-wheeled bicycle cart he built with his father called "The Awesome Pretzel." By selling pretzels and washing dishes, Guy earned enough money in six years to study abroad as an exchange student in Chantilly, France. There he gained a profound appreciation for international cuisine and the lifestyle associated with it. In 1996, Guy launched his culinary career with the opening of Johnny Garlics, his first restaurant based in his hometown of Santa Rosa, California with business partner Steve Gruber. Since the opening of the first Johnny Garlics, Guy has gone on to create a culinary empire as a popular TV host, chef of seven acclaimed restaurants and New York Times Best-Selling cookbook author. In 2006, Guy Fieri premiered his first show, Guy's Big Bite on Food Network. Today, this "Culinary Rock Star" also hosts top-rated shows including Diners, Drive-Ins and Dives, Guy's Grocery Games and guest judges on Next Food Network Star. Guy also collaborates with Rachael Ray in the star studded competition series, Rachael vs. Guy: Celebrity Cook-off and Rachael vs. Guy: Kids. Guy attended University of Nevada Las Vegas, where he graduated with a bachelor's degree in Hospitality Management. Fieri, most recently, was awarded an honorary doctorate from UNLV for his public service and commitment to the university. 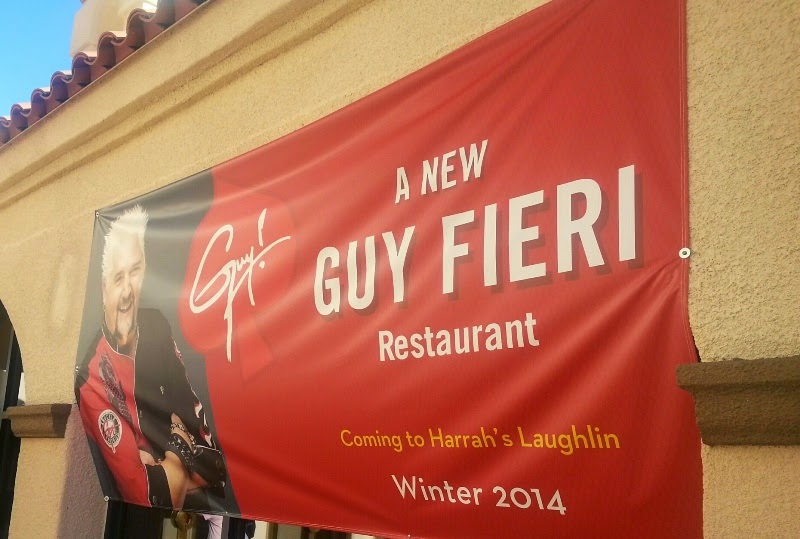 
Will Guy Fieri's Food Hit or Miss in Laughlin?

For more about the Laughlin area visit  LaughlinBuzz.Com
All information is presented for informational and entertainment purposes only and based on current materials from the sources referenced.     We receive no compensation from the properties or businesses mentioned and are not in any way affiliated with them.
Posted by Laughlin Buzz at 6:06 PM