Growing, producing, and selling of Medical Marijuana proposed on Casino Drive in Laughlin.

A proposed Medical Marijuana business in Laughlin may have hit a roadblock by a recent ruling by the Nevada Gaming Control Board.

Clark County officials released a list of entities seeking to open a marijuana business in Clark County. One of the applicants was Clear River LLC.  Nevada Secretary of State records indicate that Anthony Marnell III is an officer with Clear River and owns a 71 percent stake.  He is also the CEO of M Resort in Las Vegas and of Marnell Gaming, who own and operate the Colorado Belle and Edgewater Hotels and Casinos in Laughlin.  Marnell Gaming also owns the newly opened Laughlin Event Center.

The Mohave Daily News reported that Clear River is seeking to open a medical marijuana cultivation and production facility and dispensary at 1975 Casino Drive in Laughlin.  This location is right on Casino Drive across from Edgewater Casino and just down from the Laughlin Event Center. Currently it houses a cigarette factory and vapor lounge.  Marnell Gaming also recently received  a zoning reclassification of a portion of the Laughlin Event Center site from H-1 (Limited Resort and Apartment) to C-2 (General Commercial).  This would help comply with the Clark County zoning requirements for a medical marijuana facility.

On May 6th, Gaming Control Board member Terry Johnson sent a memo reminding licensees that the state has legalized dispensaries but federal law still prohibits manufacturing and distributing marijuana.

"Unless the federal law is changed, the board does not believe investment or any other involvement in a medical marijuana facility or establishment by a person who has received a gaming approval or has applied for a gaming approval is consistent with the effective regulation of gaming," the memo said.

The involvement of casino operators in the medical marijuana industry "would tend to reflect discredit upon gaming in the state of Nevada," the memo said.

More background on Medical Marijuana in Nevada and Clark County:

Medical marijuana has been legal in Nevada since 2000. This gave individuals holding a valid medical marijuana card the right to possess 1 oz. of medical marijuana, as well as three mature plants and four immature plans. But it wasn't until last year that state lawmakers enacted a law to allow dispensaries to operate.  The law also allows for the taxation of medical marijuana products. Clark County became the first jurisdiction in Southern Nevada to accept applications for marijuana-related businesses after approving regulations in March.

Here is the Clark County map of the locations for those seeking licences.   You can see in the right, lower corner the Laughlin location.

The Laughlin section show below clearly shows the spot on Casino Drive where it would be located.
(click on image for a larger view) 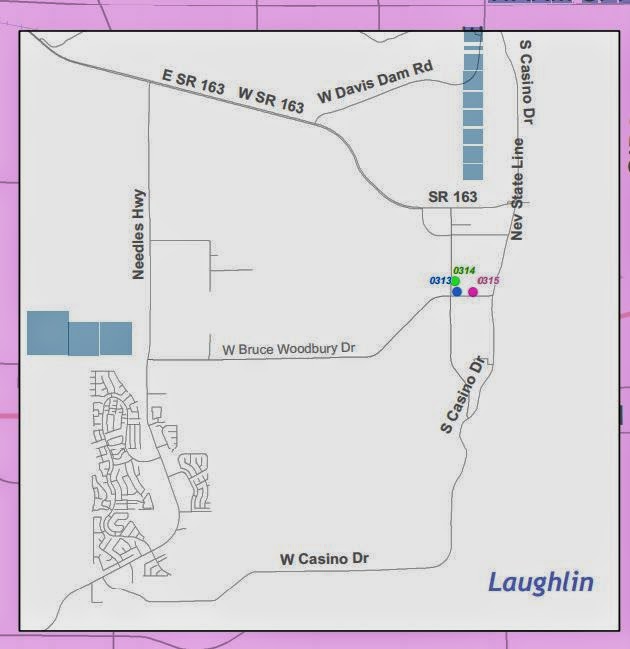 Visit LaughlinBuzz.Com for more about the area.


All information is presented for informational and entertainment purposes only and based on current materials from the entities mentioned.  Any facts, figures, dates, times,locations mentioned are from said entities.   We receive no compensation from the properties or businesses mentioned and are not in any way affiliated with them.  Opinions, statements, etc. made herein are not necessarily the position of Laughlin Buzz.
Posted by Laughlin Buzz at 6:50 PM