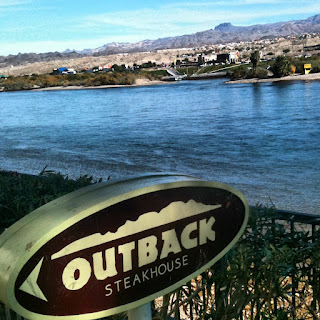 We love to support and be patrons of the local businesses and restaurants.  Lately, we have had a series of less than satisfactory visits to local places.  Perhaps it has just been a string of bad circumstances.

On a recent weekday evening we went to the Outback Steakhouse located inside the Aquarius Resort and Casino in Laughlin.   We have been there a few other times and for the most part enjoyed it.

The place was moderately busy but we were seated in a booth right away.  Our server did not come by for nearly 10 minutes.  In fact, no one came through our side of the restaurant, so we could not even tell who might be our server. By the time he did and apologized for the delay we had already decided on drinks and what we wanted to order.  When one of us ordered the 6 oz. Victorias filet steak, he strongly did an upsell on the larger size (8oz) for "only $3" more.  As we learned this turned out to be a mistake*.   After we ordered another waiter stopped by and asked if anyone had even helped us yet.  He must of noticed we had been sitting there for with nothing on our table. We said thank you that we had just ordered.

Passing on the blooming onion, we ordered the Kookaburra Wings. The menu said they were wings tossed in a savory blend of secret spices  Having never had them before we were not sure what to expect.    It took about 15 minutes for them to arrive, the outside looked fine, but on the inside they seemed bit undercooked in portions.  The secret spices were an odd flavor that no one in our party enjoyed very much.   Lesson learned on where not to get wings.

The salad called the Blue Cheese Pecan Chopped Salad got rave reviews.  Everyone said it was delicious.  This is one of the premium sides you can get when you order a steak or entree.  It is additional cost if you order the Ribs.

As usual he Fosters was great.  You can't go wrong with a Fosters draft or Oil Can at the Outback.

Our server seemed to disappear between the salads and appetizer and we sat for quite some time without him checking back if we needed more drinks, or soda refills, or anything else.  The place was moderately busy but certainly not over busy.

Finally, a different server appeared with a tray and our meals.  She put them on the table without saying anything.  It was obvious she was covering for our server.

One order was he Outback Special (Sirloin Steak).  Requested medium it was actually medium well. It was a good steak for the price and cut.  Accompanied by Sweet Potato fries that were drizzled with something sweet...honey perhaps or some brown sugar.

The Ribs (full rack ordered to share) were fair.  We love our ribs tender, fall of the bone.  These were midway between that so even though they were tasty they were not our favorites.   The BBQ sauce basic, seemed like a generic not tangy, not sweet sauce.  One person in our party hated it and wouldn't try the ribs with it.   Called a full rack, it was more similar to a 1/2 rack we have seen at other places.  For 18+ dollars with only fries as a side, it was a bit on the pricey side for the portion.

*The Victoria's Crowned Filet was a disaster.  Ordered medium, it came a very high medium well.  It had a strange gray color to it and the outside edges of it looked like the fat drippings had dried on it.  It was just completely unappetizing and overcooked anyway.

Our server had not even delivered the food and now he did not even stop back to check if everything was good.  We didn't see him for several minutes and then he appeared and went to another table where he very slowly was taking care of them.  As he was about to leave (again without even checking on us) we called him over and told him the steak was not right.   He looked surprised and like he did not know what to do and then finally said he would get another one if we wanted.  Of course, we did, why else would bring it to his attention.  Then he said that she should keep the baked potato so she could eat it while she waited for the steak.  Rather than just bring a new fresh potato with the new steak.  He asked if we could put the potato on the rib bone plate (which had a couple ribs on it already) so he could take the plate with just the steak.  We suggested that he bring a new plate instead.  He did that and reappeared with a plate, whisked away the bad steak and said it would be out soon.   Shortly thereafter a manager appeared and said he heard we were not satisfied and assured us the kitchen staff told him the new steak was on the grill and would be out in 4-5 minutes.

He brought the new steak out and the rest of us had been served and eating at least 12-15 minutes already.   When she cut into this one it was practically rare.  He had disappeared by then and didn't stop back for 5 minutes to check if it was ok.  By this time she decided she was not going to eat it anyway and certainly not going to send it back again.  We were not sure if the larger filet  had a problem with the quality or how it was cooked or the same would of happened with the smaller cut.  Most likely they do not sell as many of the 8oz as the 6oz versions.    When she told him it was fine that we did not want to send it back again even though it was not done right he simply apologized and left.  In our opinion the very least he could of done was offer to partially or fully take it off the check or something.  Even a dessert, coffee, or drink would of been a good gesture for the bad food and service.  Instead we were presented with the full check by our original waiter and not even asked if we wanted anything else.

Even after all this, we had to wait nearly 10 more minutes before he showed up again to take and process the check.   By this time the restaurant was even less busy.

There is no excuse for the poor service and management we experienced.  We understand mistakes happen in the preparation but continued ones with the service should not.

With several other options for steak in the Laughlin area I think we will avoid the Outback Steakhouse.  The price is comparable to the others but this experience left a really bad taste for the quality and the service.

Had an experience at one of the local Laughlin or Bullhead City restaurants?  We would love to hear from you.   Visit www.laughlinbuzz.com  and drop us a message!

Notes:
The Outback Steakhouse is independently owned, not owned by the Aquarius Resort and Casino.  They do accept the ACE Players card for payment using points but do not offer a discount.

Posted by Laughlin Buzz at 1:20 PM