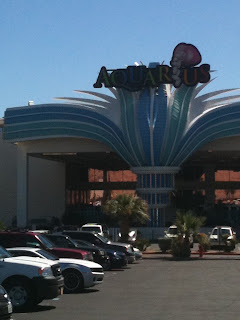 We had never tried Cafe Aquarius for breakfast in the past.  The place was semi-busy but we were seated right away in a booth.  Place was clean and staff was friendly.  No specials other than a couple on the menu.   We ordered two different breakfasts.  Eggs Benedict ($8.49) and the Griddle Combo ($8.99). 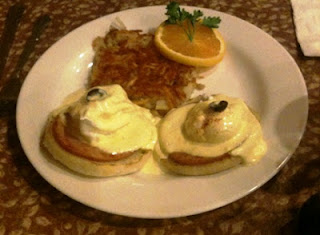 The Eggs Benedict were ok, though the English Muffin was way under-toasted.  Eggs, ham, hollandaise sauce were just average.  (Turns out they looked just like the ones that were being offered on the Buffet when we tried that another day).   Hash brown side were good.   Overall they were not our favorite Eggs Benedict in Laughlin.  Right now that honor goes to the Beach Cafe at Harrah's (they even offer a 1/2 order which is a perfect size at a good price). 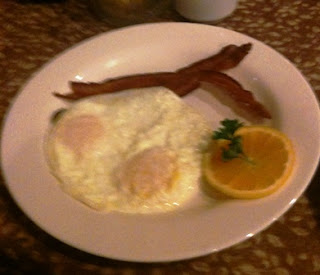 The Griddle Combo was just average as well.  Eggs looked uniformly cooked in a round pan but were just your basic egg.  Two strips (why just 2?) of bacon (almost as good as the microwave ones you can get at Sam's Club).  Two large pancakes were the best part. You could of chosen another meat instead of bacon and toast or french toast or waffles instead of pancakes.  For the price it seemed a bit small of a portion.

Coffee was bland, no matter how much sugar or creamer added seemed not to improve the taste. They put the pot on the table so you could have as much as you wanted.  But at $2.39 each for dull coffee we would rather have saved it and had some at the Starbucks across the casino floor.

The place is open, airy, clean.  Maybe too clean though, as we were preparing to leave one of the staff was wiping down the booth behind us and swung her dishcloth as she finished, spraying drops of (dirty) water on my arm.  Not pleasant but she didn't notice and what could be done anyway.

Overall the value ok, the food was just ok.  With our comps and an ACE Players card the breakfast was free.  Without it plus tip it would of been just under $30 for two people.

With so many choices in Laughlin for a good value for breakfast, it might be some time before we try the Cafe Aquarius for breakfast again.  We have had good lunches and dinner experiences there in the past.   It just seems to have slipped a bit overall in service this time.

A plus+++, they did have both the Red and Green Hot Sauce on the table.  Didn't even have to ask for it!

Next Review :  Windows on the Buffet Champagne Brunch
Posted by Laughlin Buzz at 4:53 PM