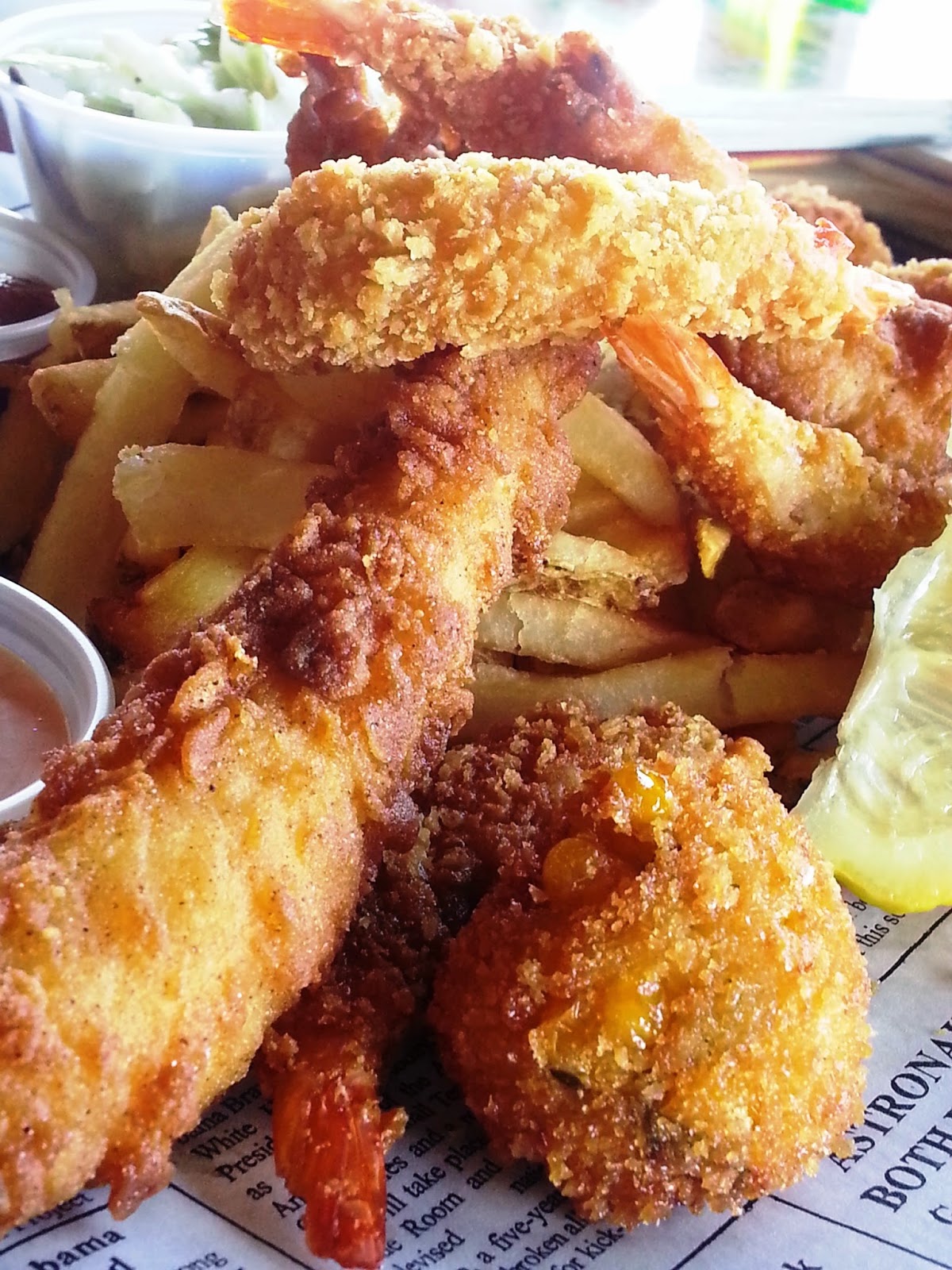 We have not been back to Bubba Gumps Shrimp Company since we dropped by when they first opened.   One late afternoon we were walking on the Riverwalk and on impulse decided to have a late lunch/early dinner on the deck.  The weather was beautiful, not too hot, little wind, and dining on the deck has a nice view. 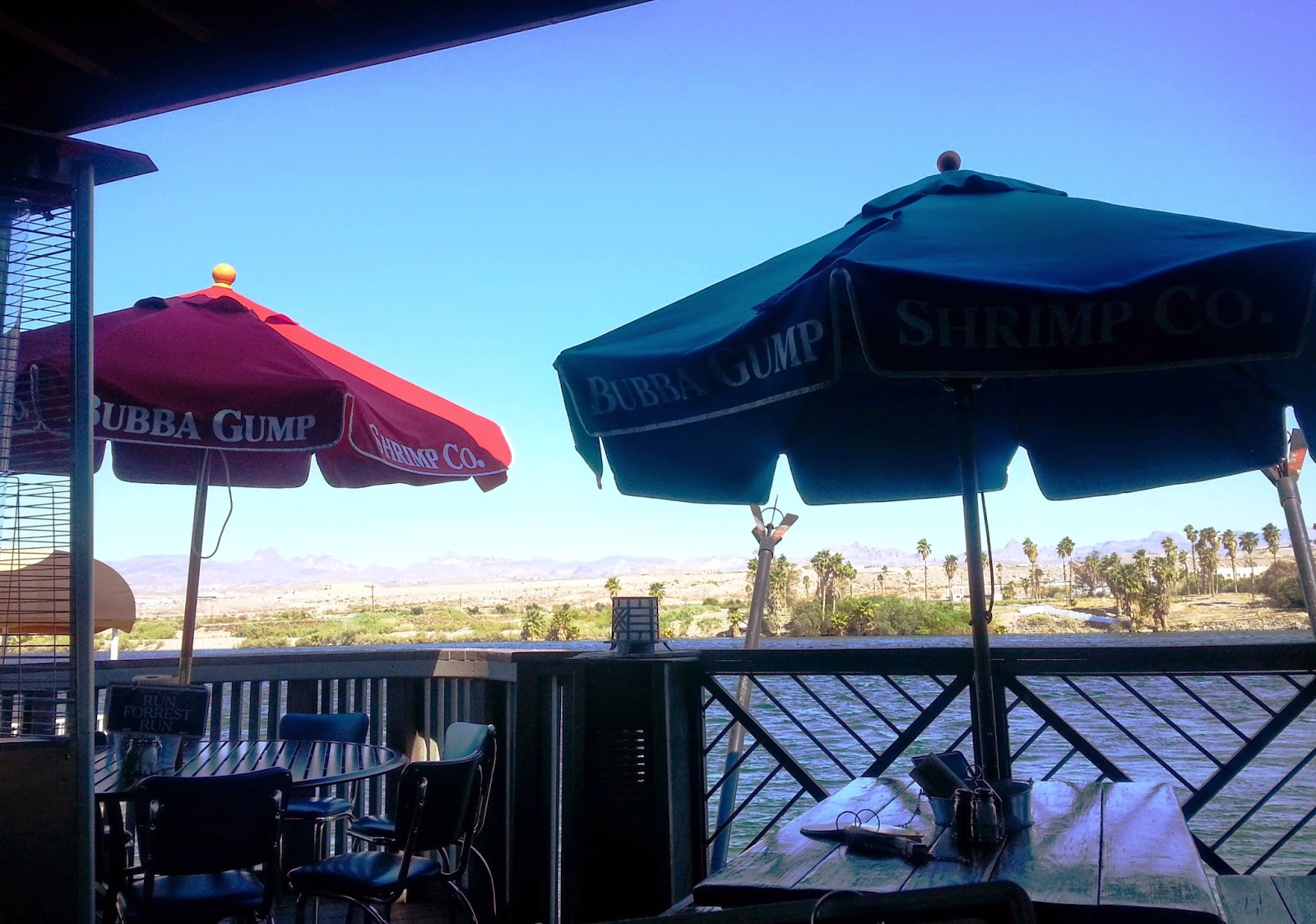 Service was fast and friendly except at the end of the meal when our server seemed to have disappeared, not clearing the table nor bringing the check.

Needless to say, even though there are other options, Bubba Gumps is all about the shrimp.  Two of us were dining so we decided to split the signature Forrest Seafood Feast, a Shrimp Cocktail and a house salad. We added in a Corona and a Stella too.  The salad was fresh, crisp and good. 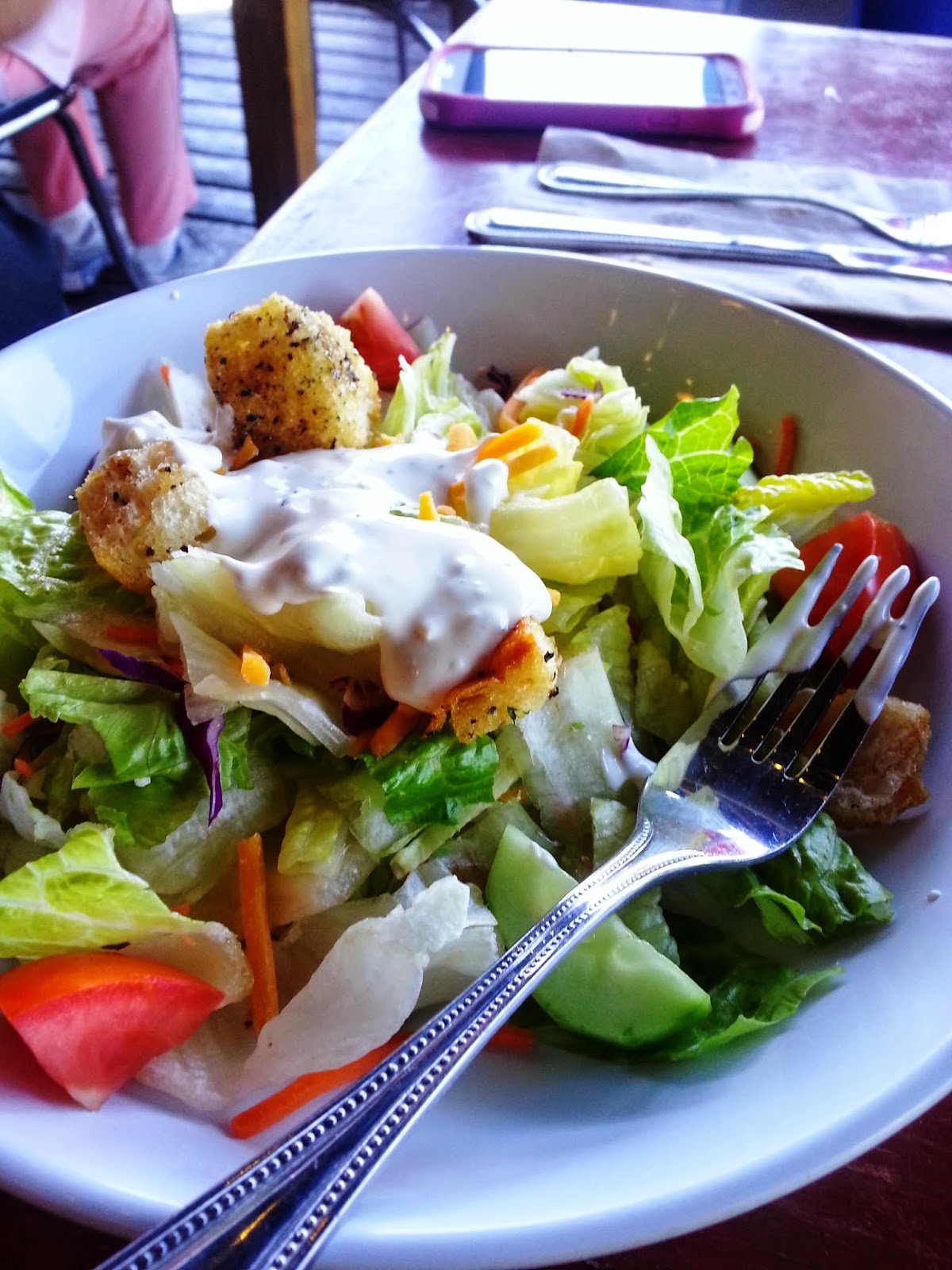 Now onto the shrimp. Wouldn't one expect a shrimp company to do shrimp very good? Yet, the best part of the shrimp cocktail was the cocktail sauce itself. It had a nice hit of horseradish right in the middle of it.  This helped the not especially firm shrimp be tolerable. And please de-vein the shrimp completely, don't leave a small piece on it (see pic). 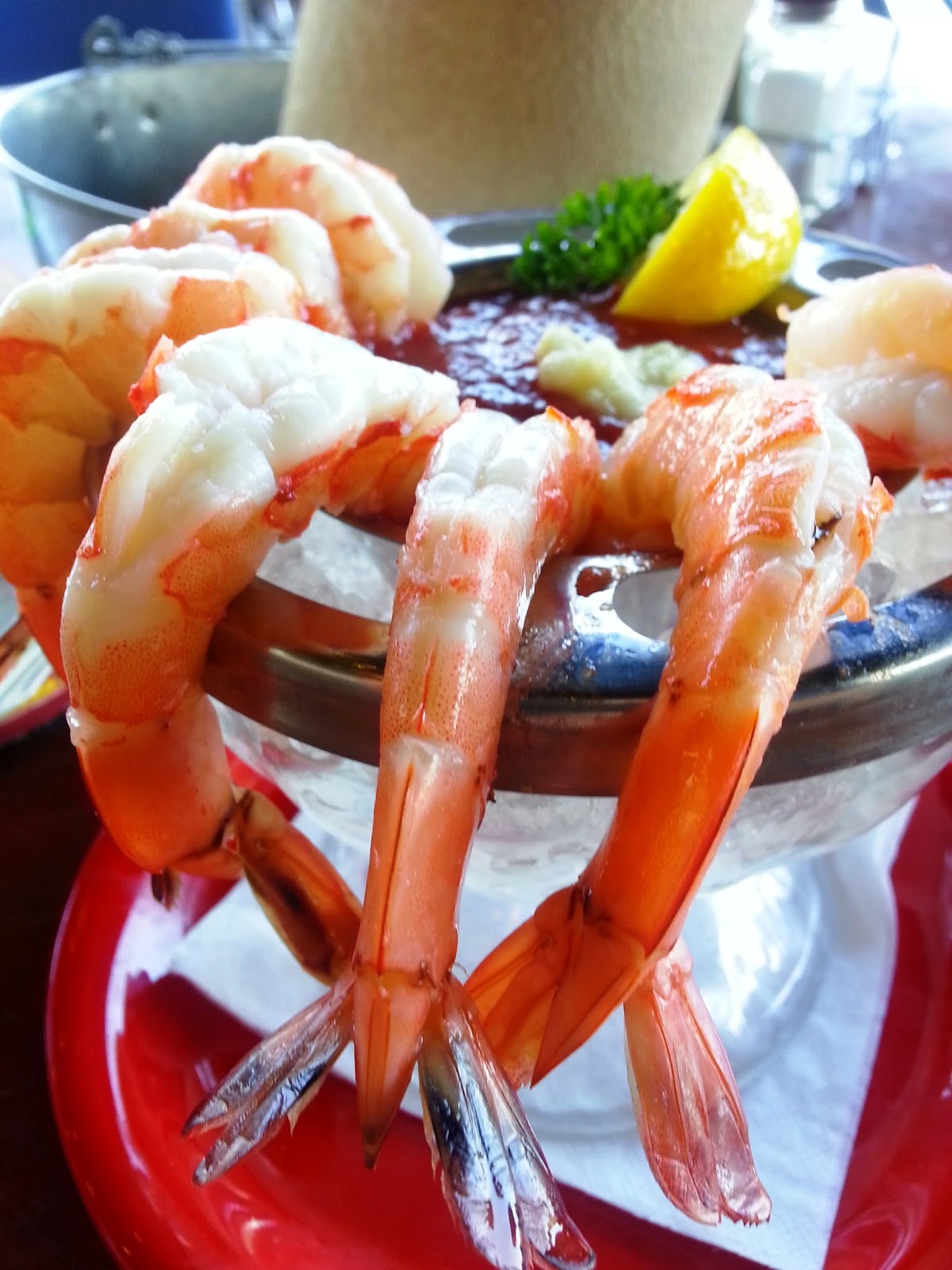 Definitely sub par compared to some of the other Shrimp Cocktails we have had in Laughlin.  Notably at the Steakhouse in the Tropicana, the Cove and Vineyard at the Aquarius, and even at Baja Blue at Harrah's. They did give us 6 shrimp, nearly everywhere you get a shrimp cocktail now it is 5 or even 4 shrimp.

The feast itself was also disappointing.  Although it was cooked nicely (i.e. fried and so healthy), the shrimp and fish were just average.


For a feast and the price ($20.79) it also seemed very un-feastlike.   It actually looks larger than it does because of the heap of fries it sits on top of.

4 seafood hush puppies were the best thing on the platter.  4 deep fried shrimp were small and again just average. There were three thin strips of fish heavily battered sitting on a mound of not crisp enough fries.  The fish was good, at least what there was of it. This would of easily been a good sized meal for one person but to share it was not that fulfilling.  A tiny plastic cup of coleslaw, cocktail sauce, and remouldade sauce (very good) were included. The fries were not not very hot and not crisp, very bland. We definitely would not order this again.  In fact, in retrospect we should of perhaps tried one of the Early Bird specials.  Or sit at the bar for the happy hour, though they we couldn't enjoy the deck.  We did have comps and a Landry card reward so meal was virtually free to us, but had we needed to pay the $50+ dollars we wouldn't have been as happy. Bubba Gumps is a sort of gimmicky chain restaurant, a bit overpriced and under quality in our opinion.

Perhaps there are some good items we have not tried, but if and when we do return it won't be for the shrimp cocktail, feat, or fish and chips.  Perhaps shrimp tacos, the Shrimp Po boy or some of the happy hour apps (available only at the bar).

Angry Birds, Laughlin style.
We did have a visitor right at the end of the meal when the server didn't clear the table. 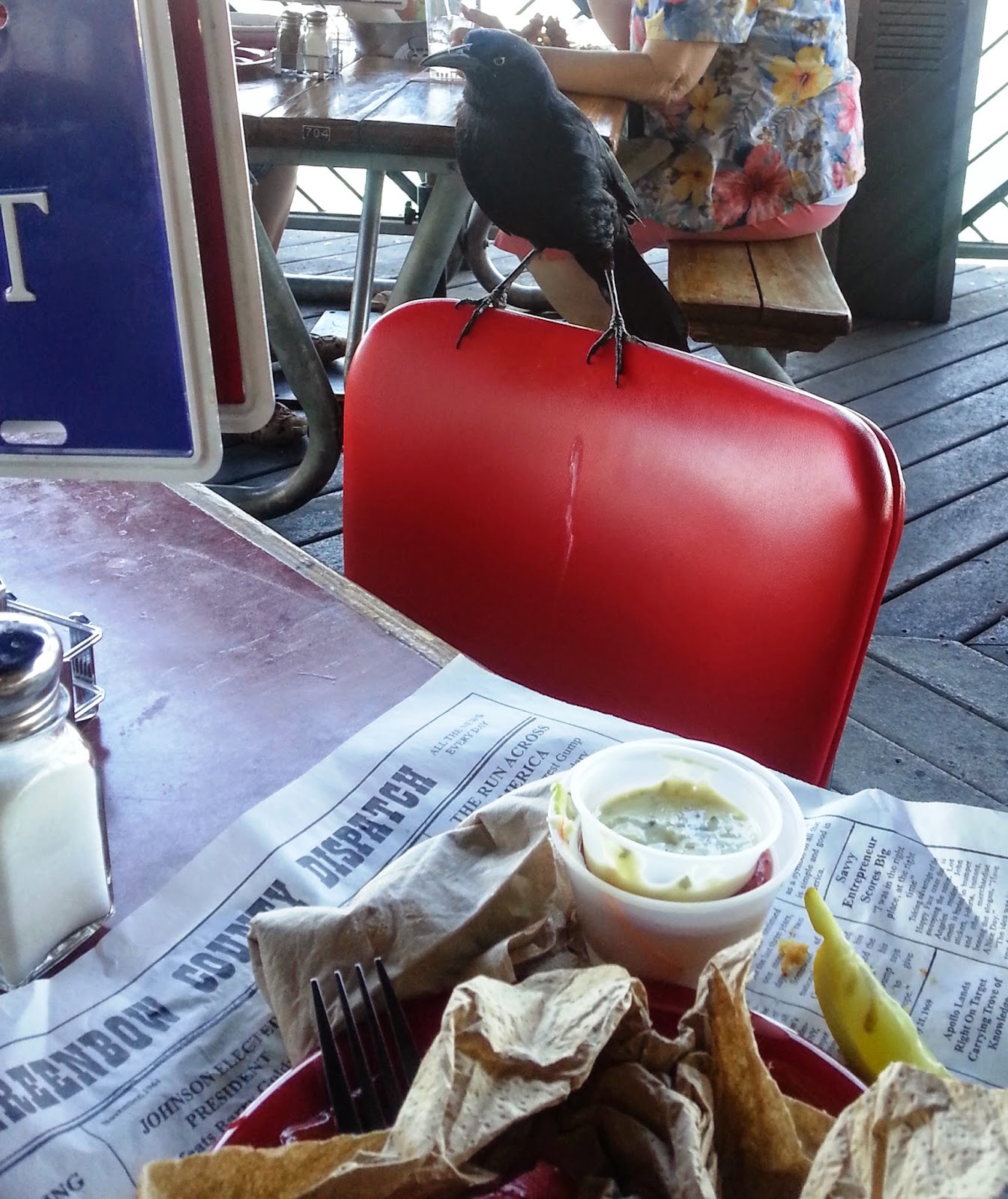 There were less bothersome birds on the deck this time than the last time we were there.  It is one of the hazards of eating outside but the servers should be a bit more diligent in clearing tables faster and ushering the birds away.

Overall eating on the deck was enjoyable and one of the only places in Laughlin you can do this right on the River.  The Loading Dock is the next closest thing. If you are going for the Bubba Gump experience try it, or some of the the drinks on the deck we recommend it. Otherwise we would pass.  Personally, we wish they had not replaced Joe's Crab Shack there at the Golden Nugget.

Bubba Gump is located right on the Laughlin Riverwalk just outside the lower level of the Golden Nugget Laughlin.  Dining is available outside year round (they have a fire pit and heaters), plus inside at the bar and in the dining room.  They also have a small Bubba Gump gift shop area.

For more reviews and current happenings in the area vist

The review above is based on our contributor's personal experience. Opinions and Photographs are his own. Your experiences may vary based on tastes, preferences, and other variables.  Information contained herein, such as pricing, hours, menu items, etc., is subject to change by the restaurant. Reviews are presented for informational and entertainment purposes only.  We receive no compensation from the properties or restaurants and are not in any way affiliated with them.
Posted by Laughlin Buzz at 7:59 AM