Truth and Faith at the Golden Nugget

Is a "Show of Good Faith" needed from the Golden Nugget?

If you haven't seen it or heard about it yet, “The Hand of Faith” is the world’s largest gold nugget on display, weighing in at 61 pounds 11 ounces.  Depending on the price of gold, the estimated value is at $3 million dollars.


We were lucky enough to see it at the Laughlin, Nevada Golden Nugget...or were we?

We still are not 100 percent sure where the "real" World's Largest Golden Nugget is.   One of our favorite Vegas sites, Vital Vegas, shared that the real Hand of Faith is now on loan at the Golden Nugget in Biloxi, Mississippi.  They also shared a picture of it traveling from Vegas to Biloxi.

So what is in Laughlin?  And has the real one ever been here?

Just this past weekend we were at the Golden Nugget in Laughlin and saw the Hand of Faith displayed with the sign that DOES NOT say it is a replica.  Apparently, there are also stand in replicas at the other Golden Nugget Casinos when the real one is elsewhere. That would mean currently the one in Las Vegas, Atllantic City and Laughlin are replicas.

Sometime in the summer of 2011 we recall seeing the Laughlin Hand of Faith in a different location by Harlows restaurant (now changed to the Claim Jumper).  At that time the sign very clearly said it was a replica* of the real one located in Las Vegas.

*We know we have the photo of this somewhere but it's hiding tucked in a backup file somewhere.

Sometime since then, some of the higher ups or a marketing guru at the Golden Nugget must of decided there is no harm in letting their guests and tourists believe they are looking at the real World's Largest Golden Nugget. So the sign longer says it is a replica. No harm, no foul perhaps?

We have as of this writing, received no response from the Golden Nugget about if the one in Laughlin is real or fake.  The sign, of course, leads everyone to believe it is real.  When we were there last it was a busy weekend and several groups of people and families were viewing, talking about and taking their picture with the nugget. It is now located right near the main lobby.

Then we came across a press release from the Golden Nugget in 2008. 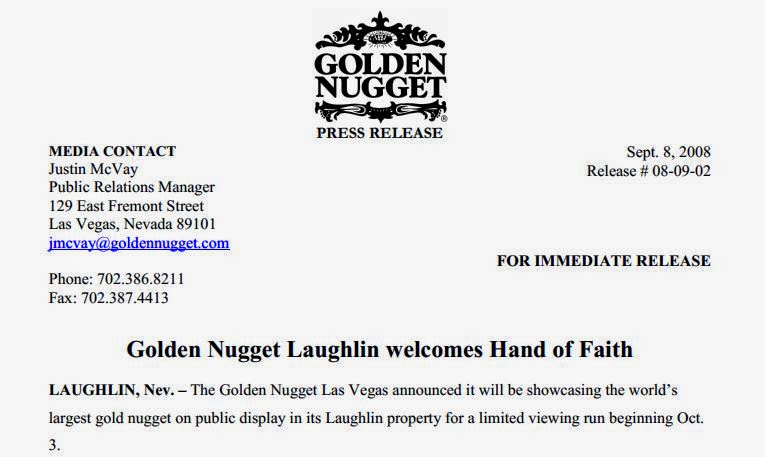 They announced announced the real Hand of Faith was coming to Laughlin.  According to the release it was to be in Laughlin from October 2, 2008 through the end of the year.  (see full press release here as a pdf file)

Based on all this if you are in Laughlin anytime soon you will most likely be looking at a very nice replica of the real Nugget.  Even if the sign doesn't tell you that you are.

It is a big deal that the Golden Nugget does not disclose that the Hand of Faith is a replica in some locations?

Are These Real or Fake?

You can have your picture taken at Binions in Las Vegas with a million dollars in cash. Just like the picture above. We would bet a million dollars Binions has real money on display. Ok, so money is not a nugget but facts are facts.


Fact might not always be as exciting as fiction.  But, we personally would prefer EVERYTHING we hear or see from a casino where we play and spend our cash be TRUTH.

The Golden Nuggets all over the country should tell the public if their "Hand of Faith" Nuggets are the real deal or not.

Sadly, the man, Kevin Hillier, who discovered the Hand of Faith Golden Nugget in 1980 passed away in May of 2014.

For more about the Laughlin area visit us at
LaughlinBuzz.Com

All information is presented for informational and entertainment purposes only and based on current materials currently found on the sources referenced. We receive no compensation from the properties, sources, or entities mentioned and are not in any way affiliated with them.
Credits:
Materials referenced from
VitalVegas.Com
VegasChatter.Com
Photo credit of Binions Million Dollars from http://www.binions.com/million_dollar_photo.php
Posted by Laughlin Buzz at 8:14 PM