75 years ago, today on January 16th 1942, a plane crash killed actress Carole Lombard and 21 others near Las Vegas. Read more about this tragic crash here (from the LVRJ).

This story reminded us that Clark Gable and Carole Lombard spent their honeymoon at the Oatman Hotel in Oatman, Arizona.

We searched our photos from visits to Oatman in the past couple of years.


The sign inside the Oatman Hotel says Clark Gable and Carole Lombard spent their honeymoon upstairs, on Mar. 18, 1939.


Another sign indicates the Gable-Lombard Honeymoon Suite is upstairs.

After reading several articles about their marriage and the plane crash, we realized they were actually married on  March, 29, 1939  in Kingman, Arizona.


Why does the sign at the Oatman Hotel say they spent their Honeymoon there on March 18, 1939?


The MARCH 30, 1939 THE NEW YORK TIMES article about their marriage (which took place on March 29th - a Wednesday) shared that the couple planned to drive to Boulder City before returning to Hollywood (a Friday) so Clark Gable could resume work on the film "Gone With The Wind".  No mention of Oatman was made.

According to author, Robert Matzen:

Owners of the Oatman Hotel in Oatman, Arizona, claim that the Gables spent their honeymoon at the hotel following their March 29, 1939, elopement to nearby Kingman, Arizona. Further, it is claimed that the ghosts of the Gables haunt the hotel, even though evidence shows that Carole and Clark (on a rare day off from Gone With the Wind) were driven to Arizona, got married, and headed straight back to Hollywood in time for a next-morning press conference announcing their union at Carole’s St. Cloud Road home in Bel Air. 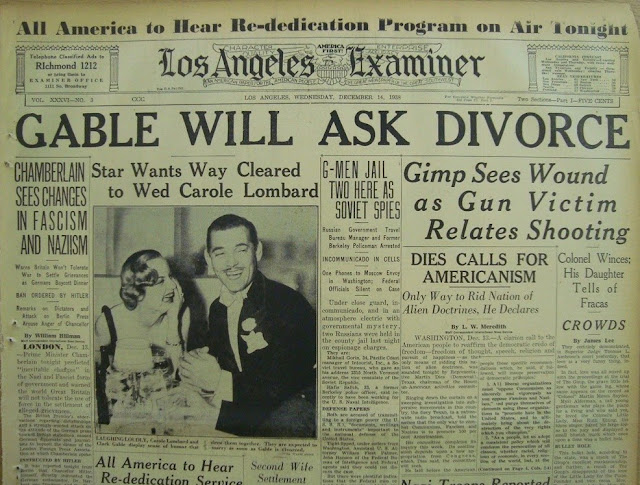 In an another article (excerpt) it was written:

The day came sooner than expected, as Ria was granted a divorce on March 8,1939 in Las Vegas. Clark promised Carole that the first day he had off from filming Gone with the Wind, they would be married. The press was waiting for the wedding, camping outside their homes day and night.

Clark’s pal and MGM publicist Otto Winkler suggested Kingman, Arizona, a small town about four hundred miles away, where he had just been married. March 29 was the perfect date, as most of the press would be in San Francisco for a press junket for the new film The Story of Alexander Graham Bell. Clark, Carole and Otto headed out to Kingman at dawn. When they arrived in late afternoon, they went straight to the courthouse for their license, then to the church for the ceremony.

Despite claims that their wedding night was spent in Oatman, Arizona, the newlyweds drove home immediately afterward, arriving in Los Angeles at 3:00am. After a few hours sleep, the publicity department at MGM had arranged for them to have a “meet and greet” with the press on the front lawn. Clark answered most of the questions, usually with “No comment” as they got too personal. Carole giggled nervously. No matter which paper you read that covered the event, they all had the same conclusion: These two were smitten! 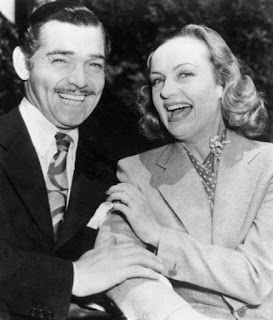 During their nearly half-dozen years together -- both before and during their marriage -- Carole Lombard and Clark Gable frequently left Los Angeles for some getaways, staying in some secluded spot. One of them was not the Oatman Hotel in Arizona, where legend (not fact) states the couple honeymooned after marrying in nearby Kingman, Ariz., in March 1939. That claim has repeatedly been disproven.

After the wedding, held at the Methodist Church in town, the couple drove back to Los Angeles -- the story that they spent their honeymoon in nearby Oatman, Ariz. is strictly myth -- and quickly arranged an interview with reporters.

According to another page, CaroleandCo  there was a postcard published commemorating the 50th anniversary of the Gable-Lombard marriage, with the date March 18, 1939.

At one time this postcard was for sale online but the link is now dead.

Postcard front and back is shown below. 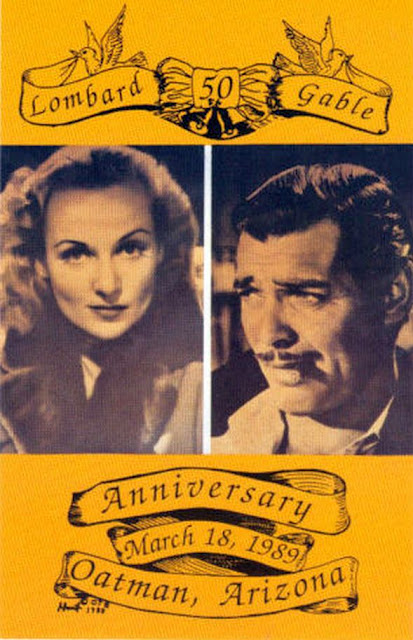 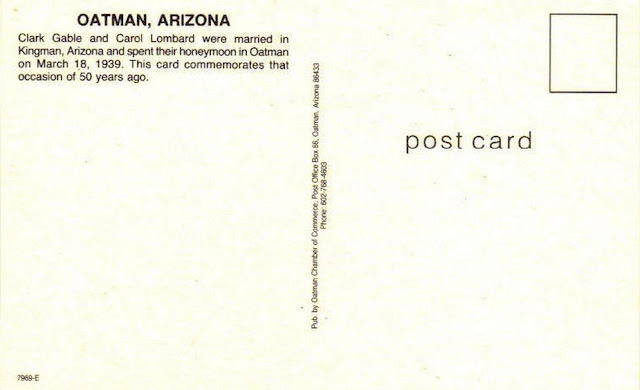 A search result showed a pin also showing the 50th anniversary of the Gable-Lombard marriage, with the date March 18, 1939. 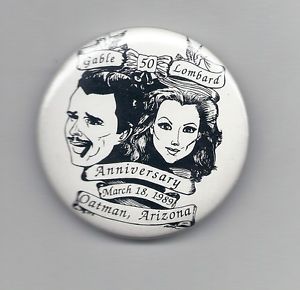 Wen we visited Oatman, we did not actually go in and see the Honeymoon Suite.  It was closed for some reason at that time (or so the sign said)

A picture (below) shows the purported Honeymoon suite, complete with pictures of Gable and Lombard on the wall. Did Clark Gable and Carole Lombard actually honeymoon at the Oatman Hotel?

If so, the dates are incorrect.   Perhaps, they did visit at some point, or Clark Gable did love the town and gambling with local miners.

Regardless, all evidence seems to point to the fact that they were married on March 29, 1939 so a honeymoon in Oatman on March 18, 1939 would of been a bit premature.

We may never really know all the details that are lost to history, but it is a nice story.

The Oatman Chamber of Commerce has no mention of Gable or Lombard on their web page as of this writing.   http://www.oatmangoldroad.org/

This article is for entertainment and information only.  Information and pictures were sourced as credited and listed below.  Other information was from public searches.
Credits:
Rarenewspapers.com
http://www.rarenewspapers.com/view/580732
Robert Matzen
https://robertmatzen.com/2014/12/-lombard-honeymoon/
https://robertmatzen.com/tag/gable
Carole and Co.
http://carole-and-co.livejournal.com/708582.html
http://carole-and-co.livejournal.com/397384.html
https://caroleandco.wordpress.com/2015/02/06/honoring-a-honeymoon-that-never-happened/
Dear Mr. Gable
http://dearmrgable.com/?page_id=3216