Lost in the Outback

*We have had good and back luck with dining at this Outback in Laughlin.   Here is another restaurant review we recently received from guest.   (October 2013)

It has been awhile since we visited an Outback Steakhouse.  On a recent visit to Laughlin we decided to try the only option for steak at the Aquarius Resort.  We had a wait of about 15 minutes even though there seemed to be empty, open tables.  We almost left to go to the Cafe Aquarius that is close by.  In retrospect, it may have been a wise decision to do so.  Our teenage son wanted us to share the Blooming Onion so we ordered that and drinks.  As I said, it had been awhile since we dined at an Outback.  The Blooming Onion seemed substantially smaller.  It also wasn't as good as we recall.  Or maybe it was just this particular Outback.  The onion definitely wasn't crisp enough.  The dipping sauce was good but without that didn't make up for the onion itself.  The small loaf of dark bread they gave us was not very good either.  The bread seemed hard in a stale kind of way, but warm in a just was in the microwave kind of way. My wife and I both had a salad.  This came promptly and was fine. After all, it is hard to mess up a salad. Then it all began.

The waitress dropped by and said our entrees should be out soon. We waited. And waited. And waited some more.  She kept refilling our son's soda and asked us if we wanted more drinks. Finally after a long 20 minutes a manager appeared and said he was sorry that it was taking so long.  He explained that "there was a problem in the kitchen" and our orders were just put in. He asked if we would like something else like a bowl of soup on the house.  We declined this odd offer. He explained he was going to give us 50 percent off to make up for the problem.  Apparently they had lost or misplaced our slip?   The waitress was wonderful, apologetic, and attentive. It wasn't her fault.

Finally the meals arrived.  Our son had the ribs.  These were tender, almost fall off the bone good.  He didn't care for the sauce. He said there was too much of it and it was too spicy.  My wife had the small filet steak and baked potato.  She said the steak was done perfectly and very good.  It did taste much, much better than the way it looked on the plate. 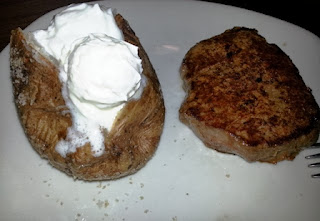 I had one bite of it and didn't think it was quite that good.  Certainly ok, but nothing special. You expect a cut of filet to be of the best quality.  Then I tasted my ribeye and realized hers was so much better. When I ordered the ribeye they recommened char grilled preparation. The ribeye was well seasoned, however, the cut of meat was not of good quality.  It actually was one of the worst ribeye steaks I have ever had. 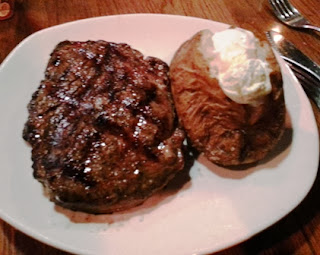 Usually, a ribeye is marbled with fat.  Good fat, juicy, and delicious that you can eat.  Not gristly and hard to cut with a steak knife.  About a third of the ribeye was inedible.  The rest was chewy and lacked flavor other than the seasoning on top. This was a lesson learned, if you must have steak, and must eat at the Outback, get the filet.  At least at this Laughlin location.   The baked potato was perhaps the best part of my meal.  I do recommend getting butter and/or sour cream on the side though.  Way too much was heaped on the potato.

When we finished we declined dessert since we had been there for an extended time already. We decided instead to pop into the McDonalds (also in the casino) for ice cream instead.  Of course, as so often is the case at this location, the ice cream machine was not working.  The manager kept his word and gave us 50 percent off our meals, but not the onion, or drinks.  Walking out I realized I didn't mind paying $60 for our meals but had it been the actual $100 it should of been, I would not have been too pleased. Ultimately, it was the ribeye that left a bad taste in my mouth.

We applaud our waitress and the manager for making the best effort in an unusual situation. Still, we probably will not go back to Outback for a long time again, and definitely not to the one in Laughlin.

For more reviews and current happenings in the area, visit LaughlinBuzz.Com

*All reviews are based on our or our contributors personal experience.  Your own experiences may vary based on tastes, preferences, and other variables.  Information contained herein, such as pricing, hours, menu items, etc., is subject to change by the restaurants. Reviews are presented for informational and entertainment purposes only.  We receive no compensation from the properties or restaurants and are not in any way affiliated with them.
Posted by Laughlin Buzz at 8:44 PM 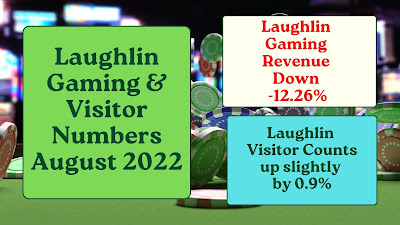