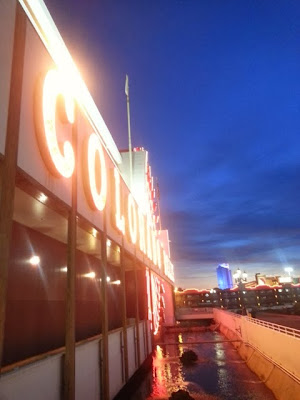 Last Sunday we made an usual stop at Pint's Microbrewery and Restaurant in the Colorado Belle during Sunday football. We had seen the signs indicating they have Sunday and Monday game night specials on chicken wings and beer.  It turns out that this is one of the best deals in Laughlin (if you love wings and beer and football).  We were surprised that the place was only half full, but the crowd was loud and into the games being shown on a big screen and other smaller TV's throughout the large bar/restaurant.  We were less surprised that service was still as slow and unsteady as it normally is.  The beer and wings as usual made up for this. 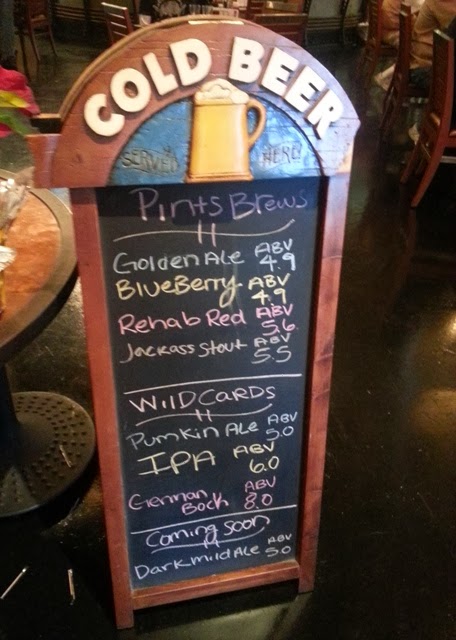 A pint of any of the microbrews on tap are just $2.50 during the game happy hour.  We were pleased to see that for a change they had many different ones available and all of them listed actually were available. With four of us we managed to try just about all of them.   The German Bock was a favorite, strong but so good. The Golden Ale was at the other end of the spectrum of strength but had a delicious smooth taste.  The Blueberry Ale is an award winner you should definitely try as well.

The wings are available during the happy hour for 75 cents a piece.  This isn't as good a price as you can get on Tuesday at Buffalo Wild Wings over in Bullhead City (50 cent a wing).  They were just as good, cooked nice and crispy, with a perfect amount of heat infused in them.  Wings must be ordered in orders of 6 at Pints.  It wouldn't be us without noting one of our pet peeves.  For an order of 12 wings they gave ONE Celery stick and ONE carrot stick.  ONE. We know the price of produce has gone up but still!  The order included the obligatory running, nearly flavorless ranch dipping sauce.  We would love to see some good chunky blue cheese and a couple extra veggie sticks!

We also ordered the Tater Skins ($8.99, no happy hour special).  These are usually very good. 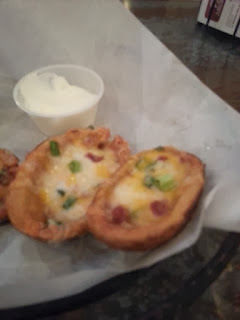 Today, however, they seem to have downsized the order.  $8.99 for 5 small halves. Even three potato's halved would be six. And one of them was tiny (perhaps a micro-potato?) This used to be one of our favorite apps to go with some beer, but $8.99 for what was given was too much. 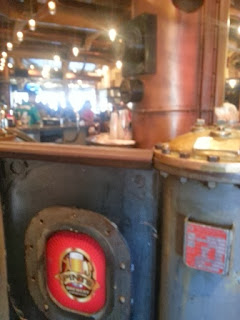 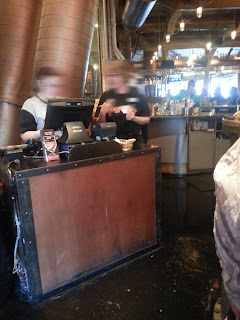 Service was ok once we were seated.  As usual, even though they were not overly busy, we had to wait at an unmanned hostess counter for way too long (while other employees chatted at the other checkout, completely ignoring us). The server did seem less than friendly, but given how bad service we have had here before we had no new complaints.

The beer was cold, the wings were hot, and the price was right. They do appear to have new tables and chairs.  Gone are the old copper tables (which were bigger).

*The sign didn't indicate what time the specials start, it just says Sunday and Monday night during the football games.  We were there fairly early and they were already on.

All reviews are our own personal experience, based on our tastes and preferences, and are presented for informational and entertainment purposes only.  We receive no compensation from the properties or restaurants and are not in any way affiliated with them.
Posted by Laughlin Buzz at 9:53 AM