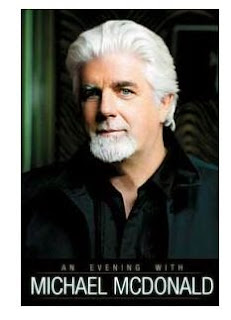 McDonald's formidable singing and songwriting skills have made him a singular musical presence for four decades. He began a long association with Steely Dan in 1975, touring with the band, singing backup as well as playing keyboards onstage. One year after the release of Steely Dan's Katy Lied, McDonald was invited to join the Doobie Brothers on the road. In the years that followed, McDonald and the Doobie Brothers enjoyed tremendous commercial and creative success. Their sound evolved from guitar-driven rock to a sultry, tight R&B feel, with McDonald writing and singing lead on "Takin' It to the Streets," "What a Fool Believes," "Minute by Minute," and other signature songs. He began his solo career in 1982 following the Doobie Brothers' farewell tour.

Continuing to explore new vistas, in 2003 and 2004, McDonald released his Grammy-nominated, platinum-selling pair of Motown albums. In 2005, he partnered with Hallmark for a special Christmas album, Through The Many Winters, which sold 500,000 copies in its first two weeks. On the heels of 2008's acclaimed crossover album Soul Speak (which hit three different charts simultaneously) and multiple appearances on PBS's Soundstage, McDonald continues to tour the world, from Europe to Asia to Australia. In May 2011, McDonald received an honorary doctorate from Berklee School Of Music.

*All content in this blog post are presented for entertainment and informational purposes only. Dates, events, times, etc. are the sole responsibility of the entity who provides them and is subject to change solely by them.  We receive no compensation from the properties, events, sponsors, groups, organizations, or restaurants mentioned or pictured in this blog post and are not in any way affiliated with them.
Posted by Laughlin Buzz at 5:12 PM