Nevada Gaming Up for April. Laughlin up Slightly.

Nevada gaming revenue rose significantly for the month of April.  The Nevada Gaming Control Board reported revenues of $897.9 million, up 5.39% (compared to the same month in 2014).


Below is a clip of the Win Revenue Summary taken from the Nevada Gaming Control Board Webpage.  See the the entire report here. 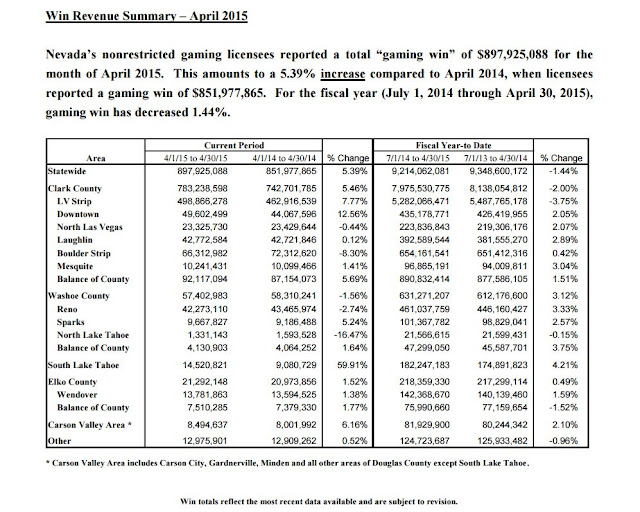 This is the third monthly gaming revenue increase in a row for Laughlin.   Four of the last 5 months have shown increases.


*Numbers are comparisons based on the same month for the previous year.

Visit the  Laughlin Buzz HomePage  for more about the Laughlin, NV area.

All content and pictures are presented for informational purposes and are based on and taken from the Nevada Gaming Control Board Press Releases.  We are not affiliated with, nor receive any compensation from any of the properties or entities mentioned herein.
Posted by Laughlin Buzz at 10:15 AM