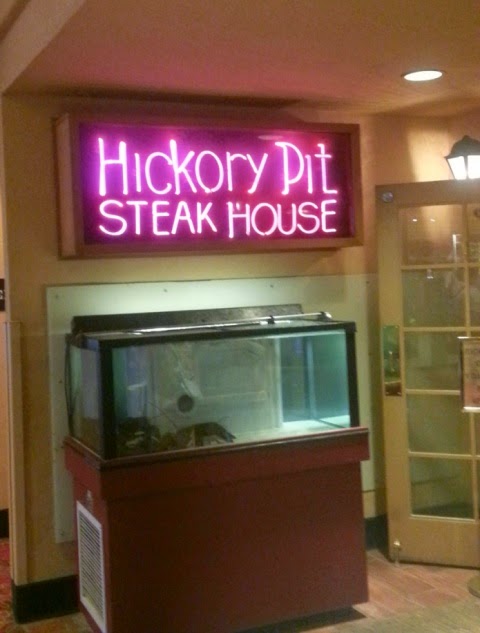 We had not visited the Hickory Pit Steakhouse in the Edgewater Hotel and Casino since May of 2013.  After that somewhat unpleasant meal and service we took a break from visiting this location.

We met friends at the Edgewater over the weekend and they wanted to go to the Hickory Pit.  Since there was still time for the Surf and Turf special* we agreed.  It is advertised as from 4-6 pm daily.  For $19.99 you can choose from the following items: 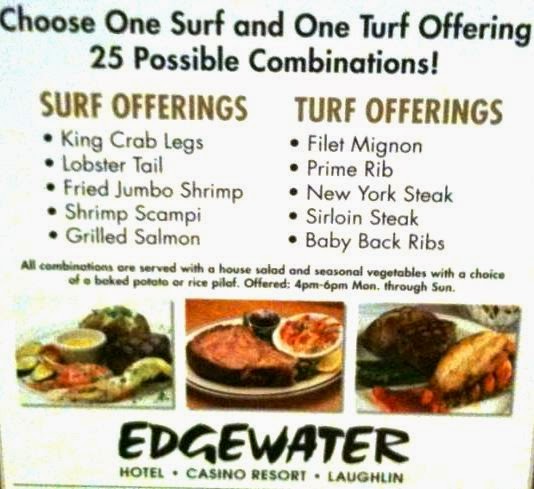 The special is served with a choice of potato or rice pilaf, veggies, and a house salad.

In the past there has always been a wait to get in. This was the case again even though just like the previous time, there were open tables.  We cringed slightly when we noticed Julie the same lead hostess we had last time was working the door.  This time we were happy to see she was very friendly.  Still, we had to wait about 15 minutes.  Just a thought for the Edgewater, implement the use of the beepers that light up to let people know their table is ready--or text them.

We  got seated before the Surf and Turf special would of ended.  When we asked our server, Bo, he said the 19.99 special was not available because there was a "Special Event" in town.  We were told we could get the same thing for $25.99 but if we wanted a salad it would be ala carte and cost $3.99 more.  This seemed like a bit of a gouge** on patrons but we went ahead and ordered it.  Last time we didn't care for the NY Strip so this time we both chose the Lobster Tail and Filet Mignon.   Plus a shrimp cocktail to share.  And a glass of wine.

Oddly enough the wine was served in a wet glass covered in water droplets.  This happened the last time we visited too.  Why???   We understand they have to wash the glasses but is there such a short supply that they are served wet and not dried.  Even the bartender or server could of wiped them down prior to pouring the wine.

We didn't get a picture of the wine glass this time, but here is the one from last year.   This time it looked the same.

The bread basket came out first. The two types of bread were fresh.  Last time there were three kinds.  But this is no big deal.  Change happens.

The salads were good even though the dressing was slightly runny.

The Shrimp Cocktail (5 shrimp) was good.  Not as good as we had a couple days earlier at the Cove Lounge in the Aquarius.  So, by default we were comparing them.  These were smaller, not quite cold enough and the cocktail sauce didn't have much of a bite to it.  Again, the sauce was a bit runny too. 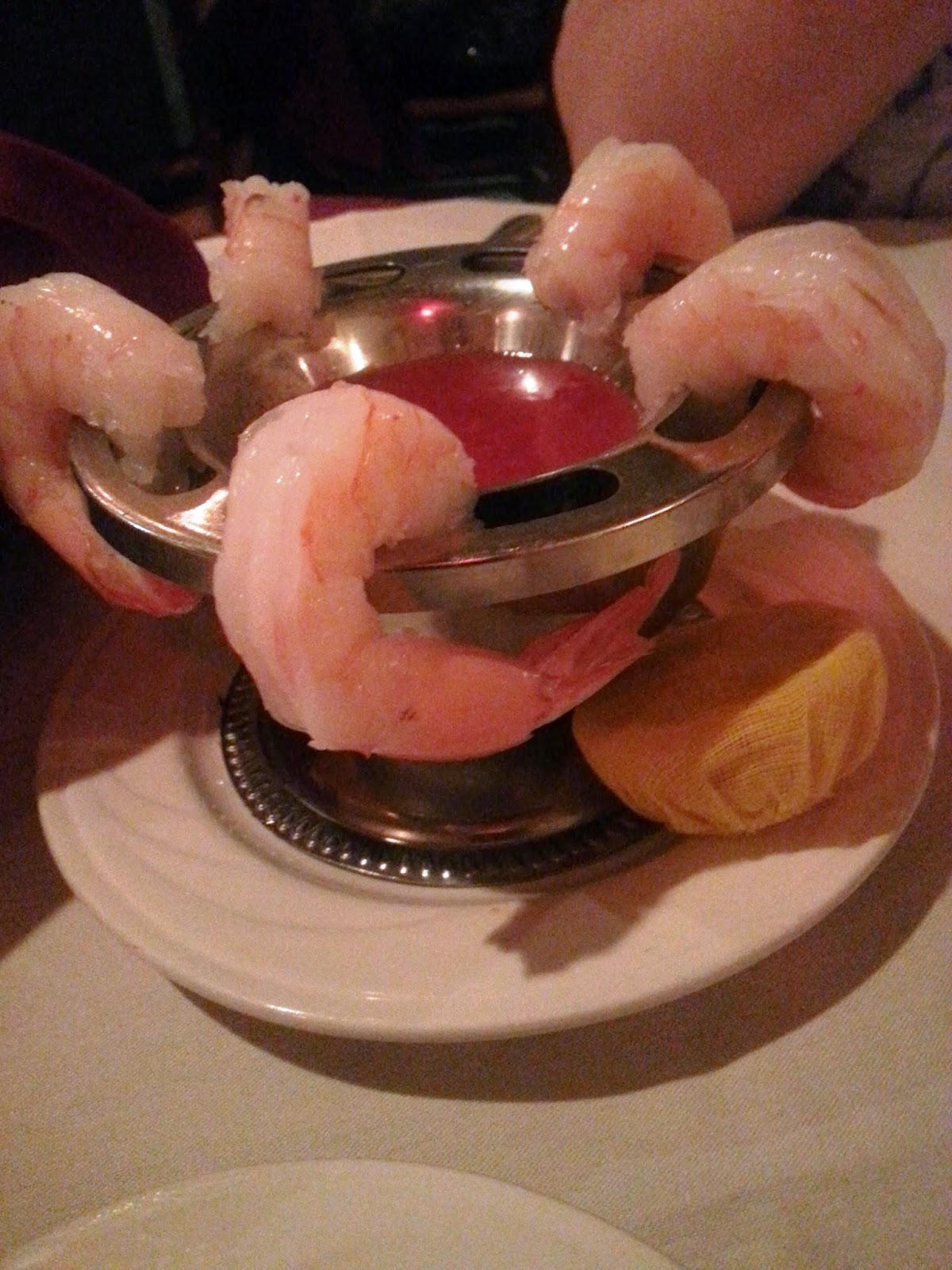 The Lobster Tail was very good, sweet and cooked just right.  Warm drawn butter is a thing of the past in most restaurants.  Remember the little lobster butter dishes over a tea candle? Our butter was melted but basically cold.  The filet was a good cut, cooked perfectly as ordered.  The side of veggies was average and could of used some seasoning.  One of us liked the green beans, the other did not.  Same thing with the carrots.  No one cared for the squash. 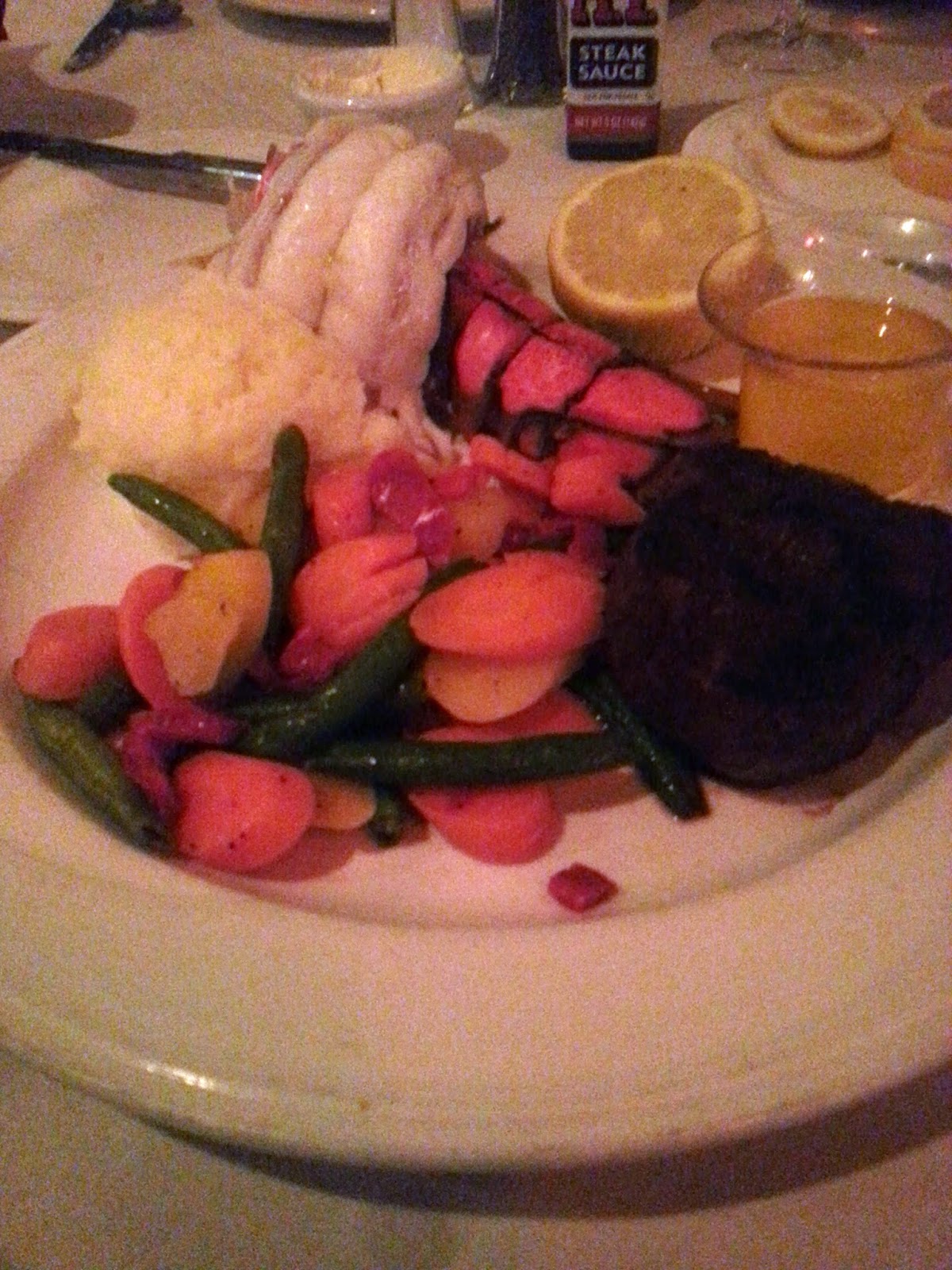 Since this non-special did NOT include a choice of a baked potato we had the very average tasting rice pilaf and garlic mashed.  Yes, a Baked Potato would of been another up charge.

Service this time was too fast.  We felt very rushed. In fact, when eating the shrimp cocktail there was one left and one of us had placed it on the side plate for a second.  The server came by and scooped up a dirty plate and grabbed the cocktail sauce in a flash and was gone.  Didn't ask if we were done or needed anything else.  Who needed cocktail sauce for the last shrimp anyway?!

We chose to skip dessert.  The atmosphere just didn't seem that enjoyable with the rush we felt were getting.  Once we said no dessert, the rush ended. We had to wait about 10 minutes for our check.  We paid our bill and took our 2 complimentary Andes chocolate mints and left.  Julie was friendly again as we left, thanking us and wishing us a good evening.

Overall considering the quality the meal was good.  If you actually get the Surf and Turf Special it is a good value for $19.99.  Otherwise, you end up paying $30 or more for the same thing, which is a bit high.

The **Gouge - Our mini-rant on up-charging, exceptions, and exclusions

This is something you see quite often.  If a special is listed as 19.95 Monday-Friday for set hours, it should be honored all the time.  Customers should not have to check for fine print exclusions. We would bet most of the people (like us) weren't even going to the special event and had to pay the extra cost just because it existed. Our non-special special ended up costing us 20 dollars more.  It is our belief and OPINION that restaurants would be better served to offer their advertised specials to their customers all of the time.  Don't make exceptions or exclusions that often the customer wouldn't even know about until they sat down. It leads to a feeling of disappointment or that one is being gouged a bit. Wouldn't it be better to have your customer be happy, feel good, and by word of mouth recommend you?   Repeat customers and new ones based on recommendations has to be worth more than the 20 extra dollars you take in during a special event. In fact, if a person has that extra 20 dollars in their pocket there is probably a good chance they will still spend it in your Casino later or on the way out.  It is all about the total experience.  We would of spent the extra 20 and probably more in the Casino if we had saved it on dinner. Plus we would of enjoyed dinner more without the feeling a being price gouged just because there were cowboys riding bulls just up the street on that particular night.

All content and pictures are presented for informational and entertainment purposes. The review was based on our own personal experience on one visit. Your results may vary. Time, events, menu items, prices, and dates are subject to change by the property responsible for them.  We are not affiliated with, nor receive any compensation from any of the properties or entities mentioned herein.

*You have to have a players ACCESS card from the Edgewater or Colorado Belle to receive the special price on nights and times it is offered. Cards are FREE at the customer service in either Casino so drop in and pick one up even if you are not going to use it in the Casino.

Posted by Laughlin Buzz at 9:57 PM