A Visit to the Diamond Lounge at Harrah's Laughlin

We had not been in the Harrah's Diamond Lounge in a long time.  After visiting a few Diamond Lounges in Las Vegas we thought we would stop in and see how Laughlin's compares.  We were UN-pleasantly surprised.  Especially, after reading last year that the Laughlin one was better than the ones in Vegas.

The Harrah's Diamond Lounge is hidden away in the hallway past the Elevators. 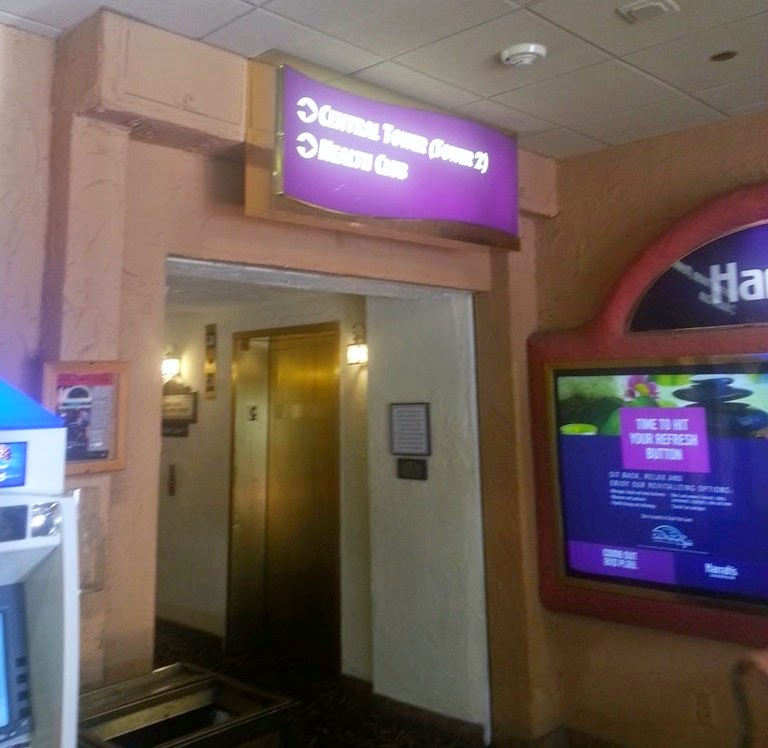 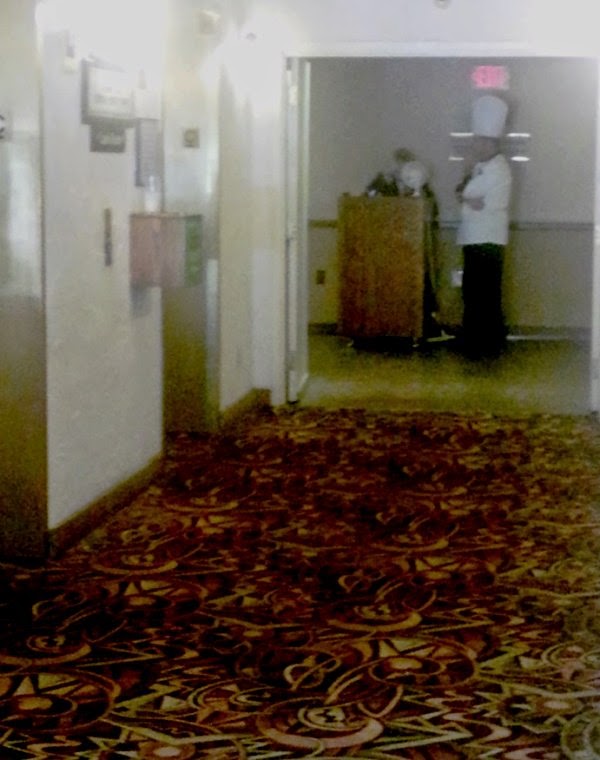 Right away we didn't get a good feeling when the Hostess positioned at the podium by the door seemed unfriendly.  She looked at (but did not scan) our card and said nothing but a gruff Thank You.
The lounge itself is divided into 3 rooms that connect.  One has the bar in it.  One has the food/snack station in in and the other one has seating.  Pictures are not of the best quality as it is it seems dim and dingy in the lounge.   About 1/2 of the tables were in use.

In one room a TV was on showing tennis.  In the other room the TV was not even on. 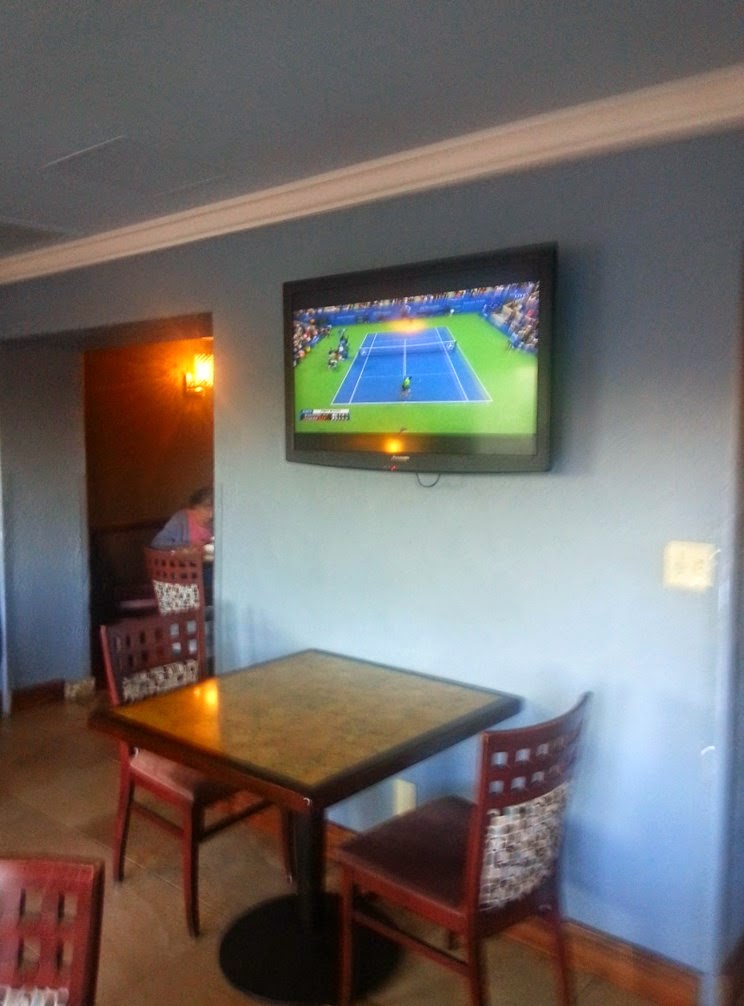 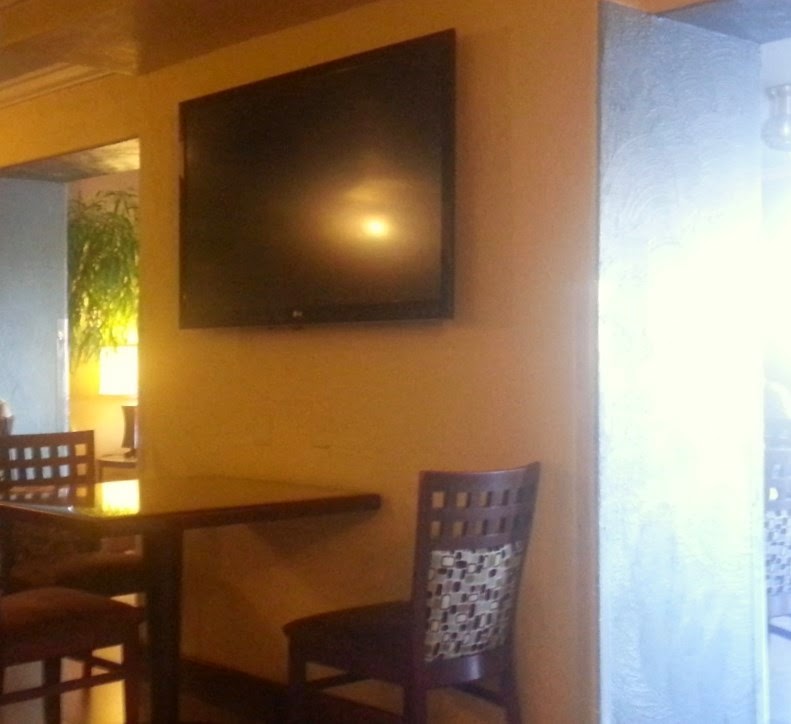 There is also some seating out on the balcony, which overlooks the River.  This would be a good place to sit on days when the temps aren't 110+.  This day all the seats outside were taken anyway. 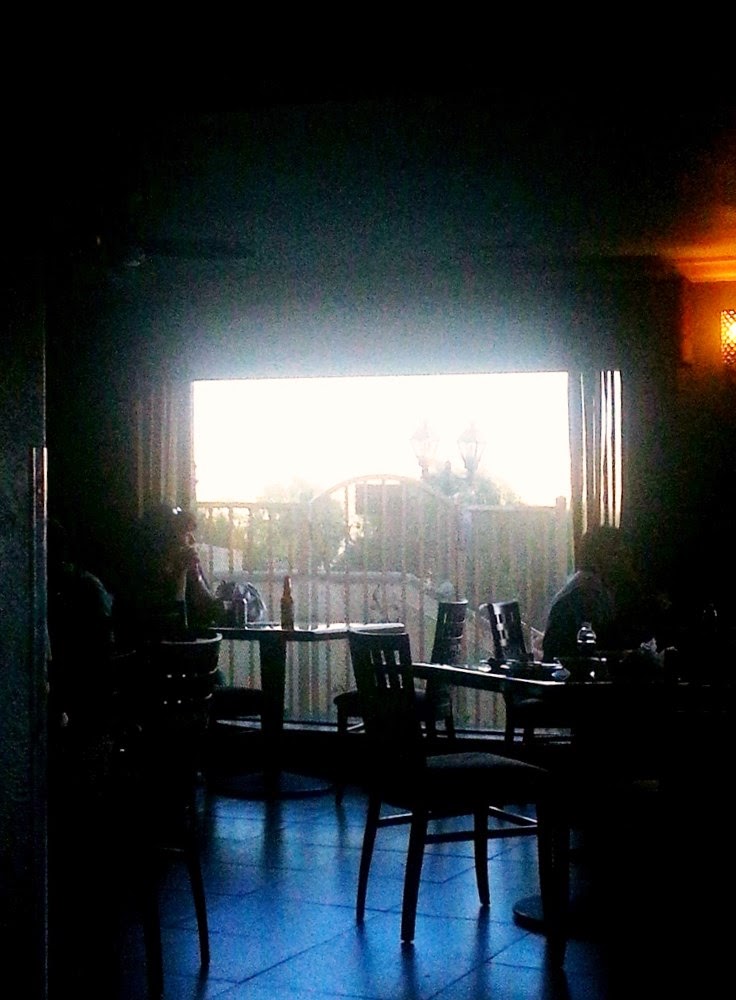 We should know by now not to always compare or expect the same thing in Laughlin as in Las Vegas.  Yet, a Diamond Lounge should be a Diamond Lounge no matter where.  After all they are all owned by Caesars Entertainment and part of the Total Rewards Players Club.

We sat down and for a few moments expecting someone to stop by the table and ask if we wanted anything to drink. After looking around we realized there didn't seem to be anyone doing this job. So, off to the bar in the other room we went.  One person was working (Carol) with several people waiting at the bar. She seemed unfriendly and in no hurry to serve anyone.  When our turn finally came one of the drinks we asked for was a Bloody Mary for one person in our party. She seemed less than thrilled to have to mix it instead of just grabbing a beer like most people were ordering.  This showed in the drink, as it was not even as good as one that can be received on the Casino floor.

*All the Diamond Lounges we visited recently in Vegas had excellent, fast, attentive service at the tables.

We hadn't planned to eat, though it was between 4-6 and that is when food is served in the other Diamond Lounges.  So, the four of us checked out what there was up in the buffet area in the corner. We tried a few things.  To put it bluntly, what they were offering, the cleanliness, and the quality was terrible.

There were only 4 rolls or buns in the bin the entire time we were there and once people took them no one bothered to refill it.  We were there about 45 minutes. Considering that the main attraction of the food set out seemed to be the chicken salad (below) the fact that there was nothing to put it on would of been a slight problem.  There were a few slices of very dry sliced bread in another bin, apparently having sat out too long. 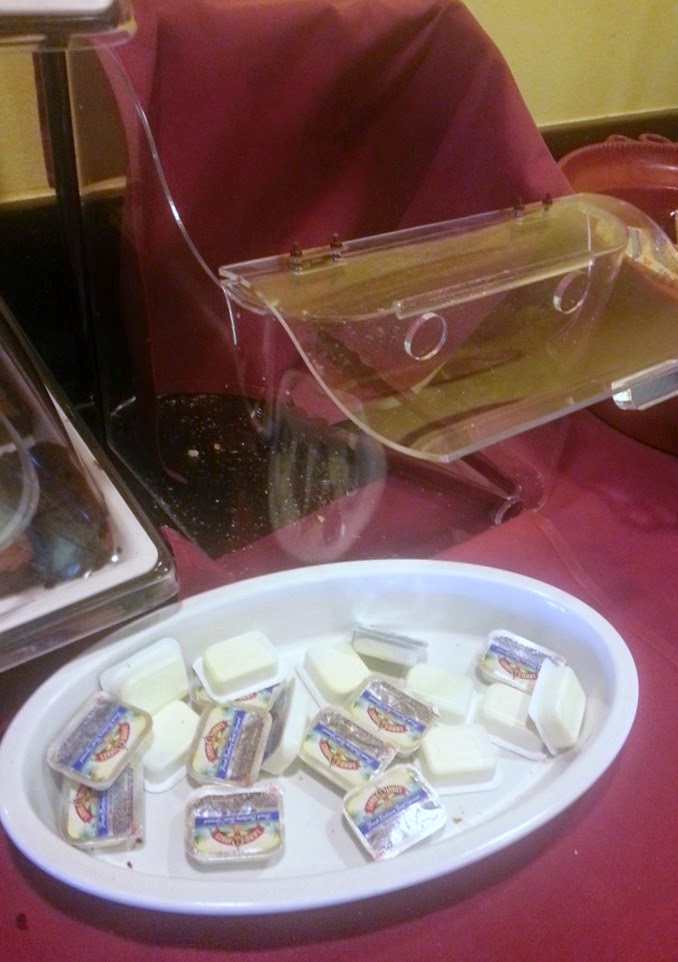 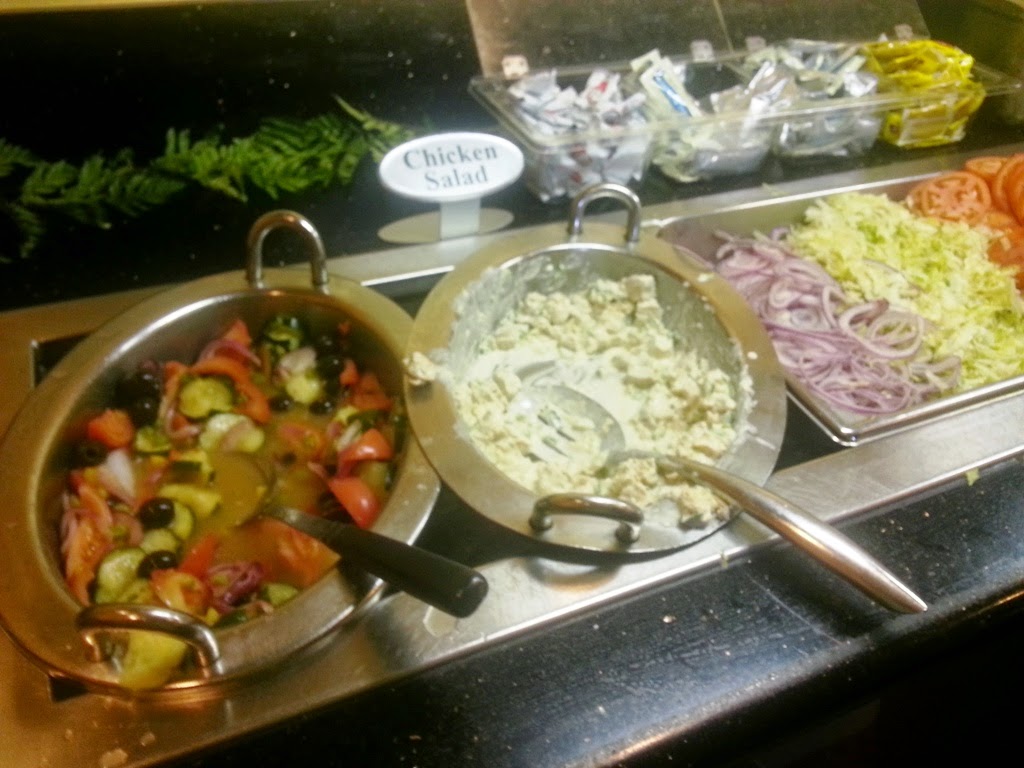 There were lots of toppings like onions, lettuce, tomato.  Mayo and mustard in packs.  The marinated veggie salad (on the left in the above photo) was called the best thing available but that's not saying much.  Tortilla chips were available, though for a long time the bowl sat with crumbs before a worker dumped a fresh bag in.   The salsa rivaled a generic store brand (hot).   The cheese tray looked awful, unappetizing and picked over, see below.  As did the watermelon. Neither was cleaned up or refilled while we were there.  Overall the entire area was messy with food spilled and no one cleaning up or wiping down the area. 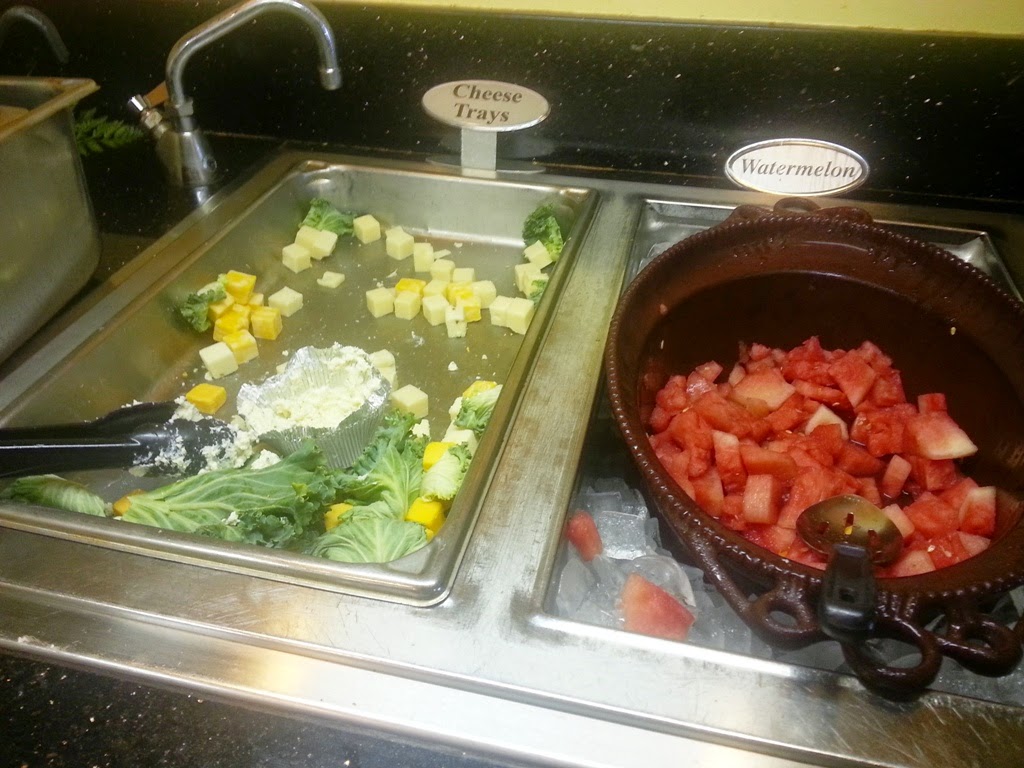 We did try the soup, which people seemed to be going for.  Not sure what it was since it wasn't labeled, but it tasted like some kind of variation of chicken or wedding soup as it had some brownish chicken and assorted vegetables.

One person who got a bowl of soup was walking past our table and spilled half of it on the floor. This was not long after we got there.  Oddly enough it was still there when we left.  We even watched two of the men whose job appeared to be busing/clearing the tables walked right through it.    One older gentleman heading to the food area almost slipped in it.   Had someone stopped at our table we were going to suggest it be cleaned up, but no one did. 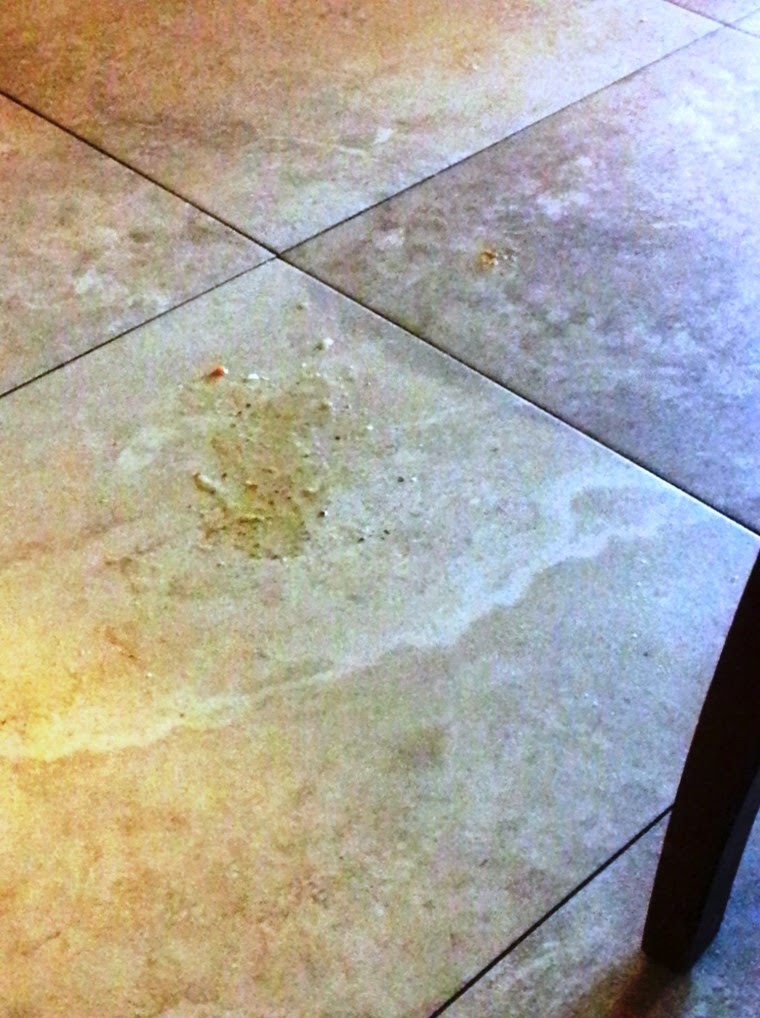 The rest of the floor also was not very clean.  After seeing this and the messy buffet area, we began to wonder when the last time the Southern Nevada Health District inspected the place.

We decided to grab one more drink before we left.  Most of the food items we sampled were pushed aside.  For well over 20 minutes no one bothered to come clear our table. 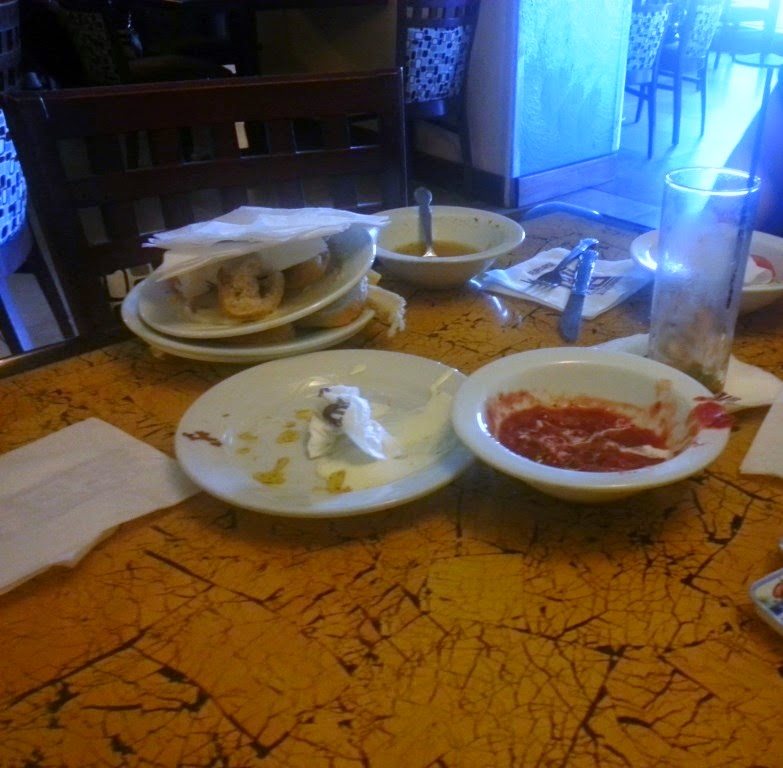 On the way out the hostess at the podium looked up at us and didn't say a word. Isn't it the job of a hostess to welcome, greet, say goodbye and show some warmth to the guests coming in and out? Apparently, not at Harrah's Laughlin.

Someone sent us a message on Facebook suggesting that because we had been there on a weekday, maybe that was the reason it was so bad.  We aren't sure we want to even go back on a weekend to see if they are right.  And we don't agree.  Because shouldn't the cleanliness, service, and quality be consistent for those guests who have access to the "Diamond" Lounge all the time?

FYI...to get in the various Caesars Diamond Lounge you have to be a qualified Diamond Member or Seven Stars Member.  Members can bring a guest along.  Drinks and Food provided is free.  To get to this level you have to play the equivalent earning 15,000 tier credits in a year.  Roughly this is equivalent to 1 tier credit earned for every 5 dollars played or spent in a Casears property.  15,000 tier credits would be about $75,000 played through the machines.    Seven Stars is even higher requiring 150,000 tier credits!   For this amount of spending/play one would expect the Diamond Lounges should be decent.

At the Harrah's lounge we saw one station for Internet Access. Someone was sitting at it so we couldn't check it out.  This would be a good benefit to use, since free wifi and even cell reception inside the Casino is hard to come by.

The bottom line is Harrah's Laughlin and Caesars Entertainment should be embarrassed to provide such a poor experience in this particular Diamond Lounge.  There really is no excuse for the lack of cleanliness and lack of or unfriendly service.  After all this is exclusive to players who "earned" the benefit to visit the lounge by gambling and patronizing the Caesars properties at a high level.  The reward should at least somewhat reflect that.

The lounges we visited recently at Paris Las Vegas, Caesars Palace, and Planet Hollywood all easily surpassed this one.  Just because this is in Laughlin is not an excuse.

*Update:  September 29, 2014:   We were convinced by a couple readers to go back and give it another try.  They said they had been there AFTER our visit and things had vastly improved.

Visit
LaughlinBuzz.Com
for more about the Laughlin area.

All opinions expressed are our own and from our personal experience. Information is presented solely for informational and entertainment purposes only and is based on public knowledge available from the property or entity involved.  We receive no compensation from the properties or restaurants mentioned and are not in any way affiliated with them.  Dates, times, events if included are the sole responsibility of the property or entity involved

Posted by Laughlin Buzz at 7:07 PM