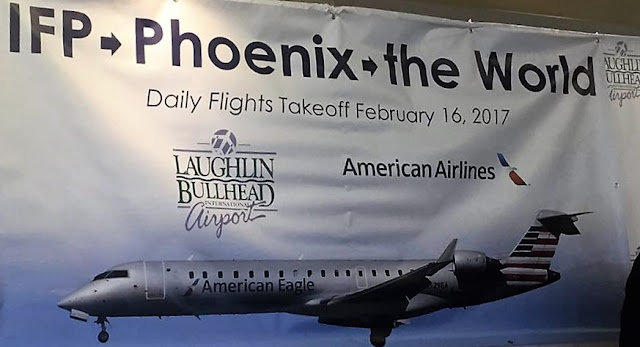 Flight service into the Laughlin/Bullhead City International Airport will begin on February 16, 2017.

The announcement is the culmination of over a decade of labor on the part of Airport Authority staff and its many community partners who have been tirelessly working to attract commercial service since the late 1990s. “We have been waiting for this news for a really long time and we are beyond excited for this opportunity”, said Jeremy Keating, Airport Director. Efforts to attract scheduled air service ramped up in 2008 when the airport was first awarded a Small Community Air Service Development (SCASD) grant from the U.S Department of Transportation. Efforts continued to gain momentum in 2010 when Sixel Consulting Group was hired by the airport to help organize air service development strategies.

This summer, the airport authority was awarded another SCASD grant which provided $750,000 towards the recruitment of an airline to bring scheduled air service to the community. The required $750,000 match was guaranteed through the partnership between public entities like the City of Bullhead City, AZ and private entities including the Laughlin Chamber of Commerce, the Bullhead Area Chamber of Commerce, Laughlin Tourism Commission, the Laughlin Casino Resort Hotels, as well as dozens of local businesses and individual community members. An additional $600,000 of In-Kind support was pledged for marketing & advertising.

Hastings noted the arrival of American Airlines marks a new era of economic growth and enhanced quality of life for the region as a whole. Each year, more than three million people come from around the country to stay at the region’s resorts, play in Laughlin’s casinos, enjoy the Colorado River, and hike through the mountains of the Mohave Desert. Now, the airport will be able to connect those visitors and local residents to the international air travel network more efficiently.

“Our most recent Economic Impact Study indicates this new air service will generate a regional economic impact of over $13 million annually,” says Hastings. “In addition to a new era of economic growth we are also marking the end of an era. One can no longer say ‘You can’t get here from there’. Instead, we can now safely say ‘Our region is open to the world’.”