New Items at the Cove Bar and Lounge 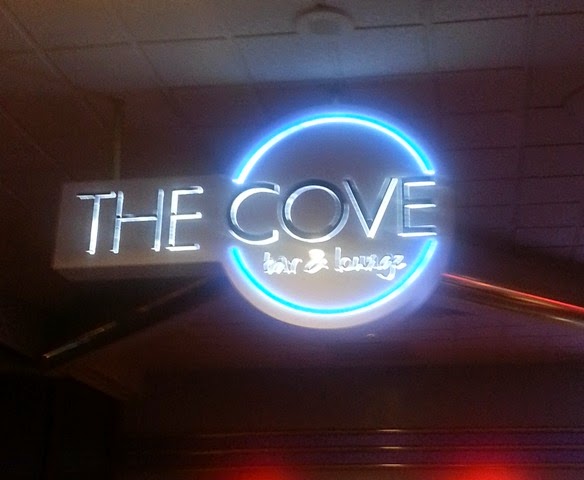 In the past we have mentioned the Cove Bar and Lounge as a good place for drinks and appetizers.

We stopped in the Cove to have a very early nightcap and saw they expanded and changed their appetizer menu lightly.  Four new items included Kobe Beef Sliders, Bonsai Buffalo Wings, Pan Seared Dates, and Prosciutto and Asparagus Twists.  The Zucchini Fritte (which we loved) and the Sweet Potato Fries (never tried) appeared to be taken off.

A Naked Margarita and a Bloody Mary later our order of the Kobe Beef Sliders and
Wings arrived.

The Kobe Beef Sliders were excellent, although we would of preferred them just a tiny
bit more medium instead of well done.  Two sliders come per order.  One slider is topeed with a ring of grilled pineapple and teriyaki.  The second one has bacon and cheddar.  It was tough to choose
which one was better but we both agreed on the Pineapple one.  We would definitely order
them again.  Price $11 and comes with a small side of hand cut fries.

The Bonsai Buffalo Wings are described on the menu as Jumbo wings with a cool cucumber dill sauce with a Wasabi kick.  They were large wings, 5 to an order.  The breading and wings themselves were infused with the sauce, which had a good flavor and just the right amount of kick.  The cool cucumber dill sauce on the side complimented it well.  For our personal taste they were just a bit less
crisp than we like our wings. Mostly due to the breading. The chicken was cooked throughout and was tasty.  Would we order them again?  Possibly, but with a request to make sure they are a bit crispier.  A side of celery or carrot sticks with them would of been a nice touch too.  Luckily for us plenty of celery comes with the Bloody Mary. Price $11 is a little bit high for just 5 wings.

Next time we will try the other two new items we saw--the Pan Seared Dates and Prosciutto and Asparagus.

Our server was extremely friendly and in spite of how busy it was this night, she was very prompt
and attentive.

They have many specialty Martini's on the drink menu too.  If you like it sweet then the Pineapple Upside Down Cake or Chocolate Covered Cherry Martini is a must try. 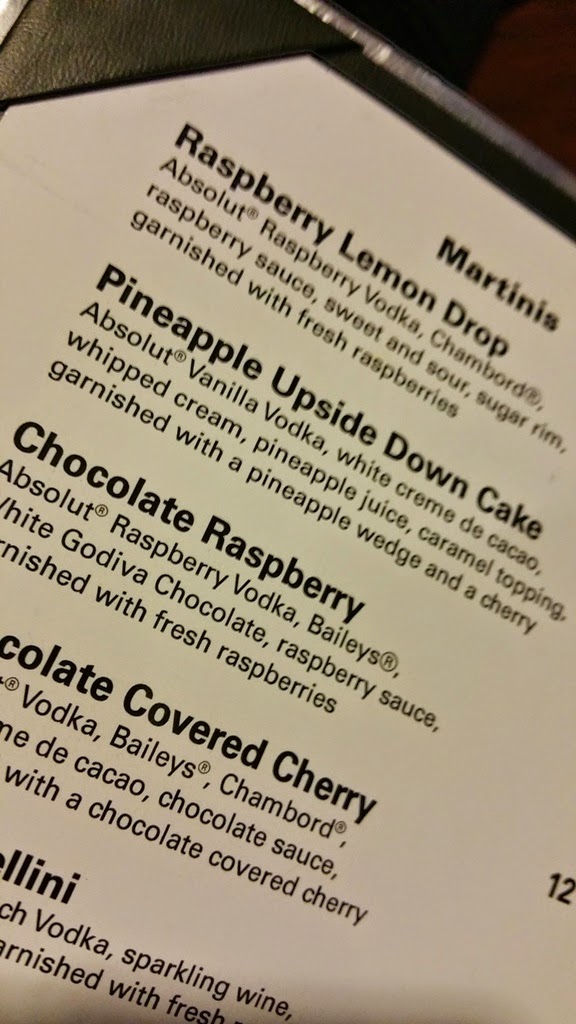 *All reviews are based on our own personal experience and are not endorsed or paid for by the restaurant..  Your own experiences may vary based on tastes, preferences, and other variables.  Information contained herein, such as pricing, hours, menu items, etc., is subject to change by the restaurants. Reviews are presented for informational and entertainment purposes only.  We receive no compensation from the properties or restaurants and are not in any way affiliated with them.
Full disclosure - we often get complimentary tickets from the AcePlay players club which can be used at the Cove or Duet.  These can be earned for players who get to the green or red levels and are given out weekly.  Would we go to the Cove without them? Perhaps, but not as often if we had to pay full price. Still, we do find it a good place for drinks, big appetizers that are share-able.  They also have tv's and some music (weekends). The lounge is also non-smoking and located steps off the Riverwalk.
Posted by Laughlin Buzz at 2:24 PM