Will Guy Fieri's Food Hit or Miss in Laughlin?

In anticipation of a December opening of a new Guy Fieri restaurant in Laughlin we dropped in to check out the food at Guy Fieri's Vegas Kitchen & Bar.

Although the Laughlin restaurant is as of yet unnamed and no menu has been announced, it is probable that it will be very similar with some added regional "favorites".

Below is our review of the items we tried in Vegas.  This is not what definitely will be available in Laughlin.  After that we will share our thoughts on how this all "may" translate to what we can expect or not expect at the new Guy Fieri restuaurnt coming to Harrah's Laughlin 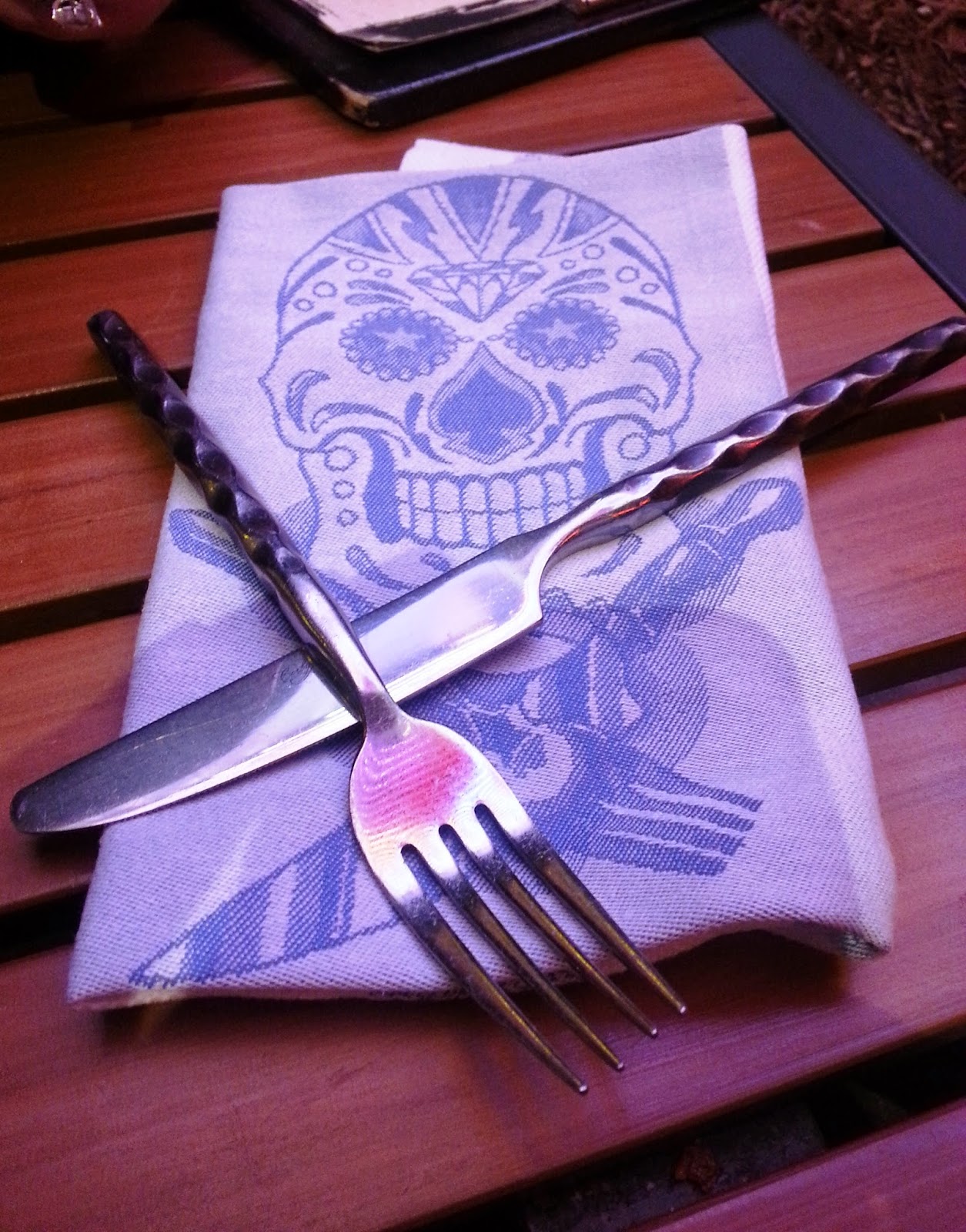 The plating and presentations were "off the hook" as Guy Fieri likes to say. The food itself was good, just not as good as we went in expecting.  Everything was fresh.  But we felt it took too far of a ride into "Flavortown".  Meaning there were too many combinations and flavors combined in most of the selections. Almost as if the chef was trying to hard. Sometimes, simple combinations that sync together works better.  Especially in choices like a burger or salad.

By far the best food item we tried were the Triple T Fries.  The triple T stands for Truffles and you get that flavor on steroids. The thin shoestring style fries are covered in black truffle and truffle infused Gouda and served with a creamy white truffle dip. 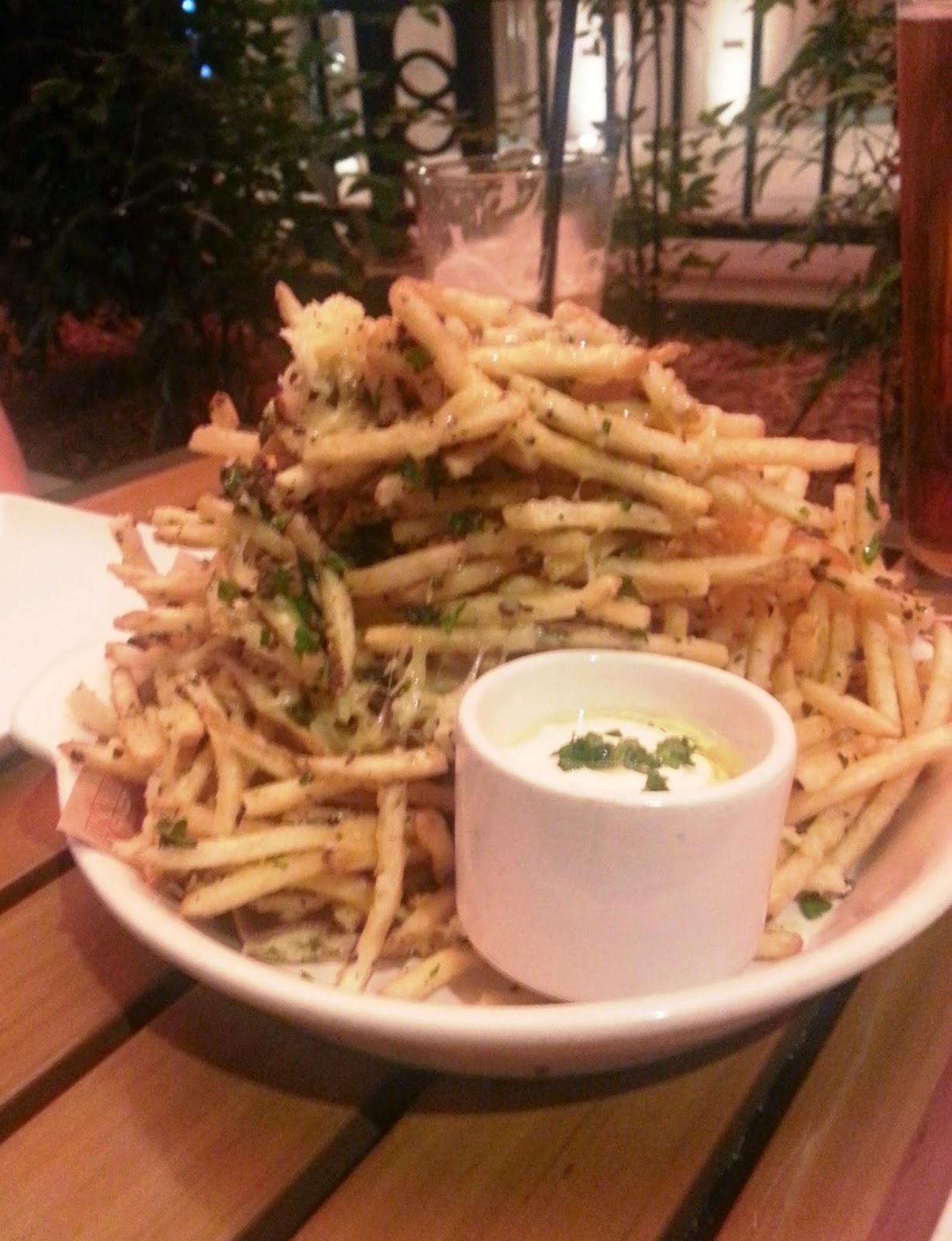 When it arrived we were shocked at the size of it. It was like a potato farm volcano erupted with cheese. This is easily an appetizer/shareable for 4 or  more people.  Two or three people could not take it down. The truffle and sauce were excellent with the nicely crisped fries. Even at the $13 Total Rewards Member *price we recommend it.  Just don't get it if you are also getting something else that includes fries.  Just how many potatoes would you want to consume?

The Chicken Wonton Takeout Salad (at $13) was a huge salad with another unique presentation, including a Chinese food take out box and chopsticks for effect.  The salad was delicious and included napa tips tossed with mixed greens, mandarins,cashews and fried chicken wontons on a skewer. A spicy Ginger vinaigrette topped the salad. Advised by the waitress that the vinaigrette had a bite to it, she suggested omitting the added jalapenos that come with it. This was a wise choice, without them the salad was just right.  The wontons were very tasty. Surprisingly, the salad was far better than the Burger or Tacos. The portion was huge too, easily a share for two people.

The Victor’s Street Tacos ($16) featured three grilled chicken tacos with cilantro and onions. The chicken was diced small and well flavored.  The side of a hot salsa and very creamy, fresh tasting guacamole helped make the average tasting tacos taste fairly good. To be honest though, other than the presentation and side sauces, these Tacos are only slightly better (maybe) than the special happy hour $2 chicken tacos you can get The Tequila Bar and Grille in Baily's.

As we were contemplating which burger to try, our waitress suggested the Mac-N-Cheese Bacon Burger. She said that was one of the most ordered burgers and it had won an award in NY City. The burger choices for us were hard to decide on because each one had so many toppings. For the most part they seemed to either have something on it we didn't care for or a combination that didn't sound so appealing. Of course, we could of asked to customize a burger and have something left off but chose not to.  Ultimately, we went with her suggestion, in spite of the $19 dollar price. The 16 dollar Las Vegas Strip burger prices seem to keep inching up and up. 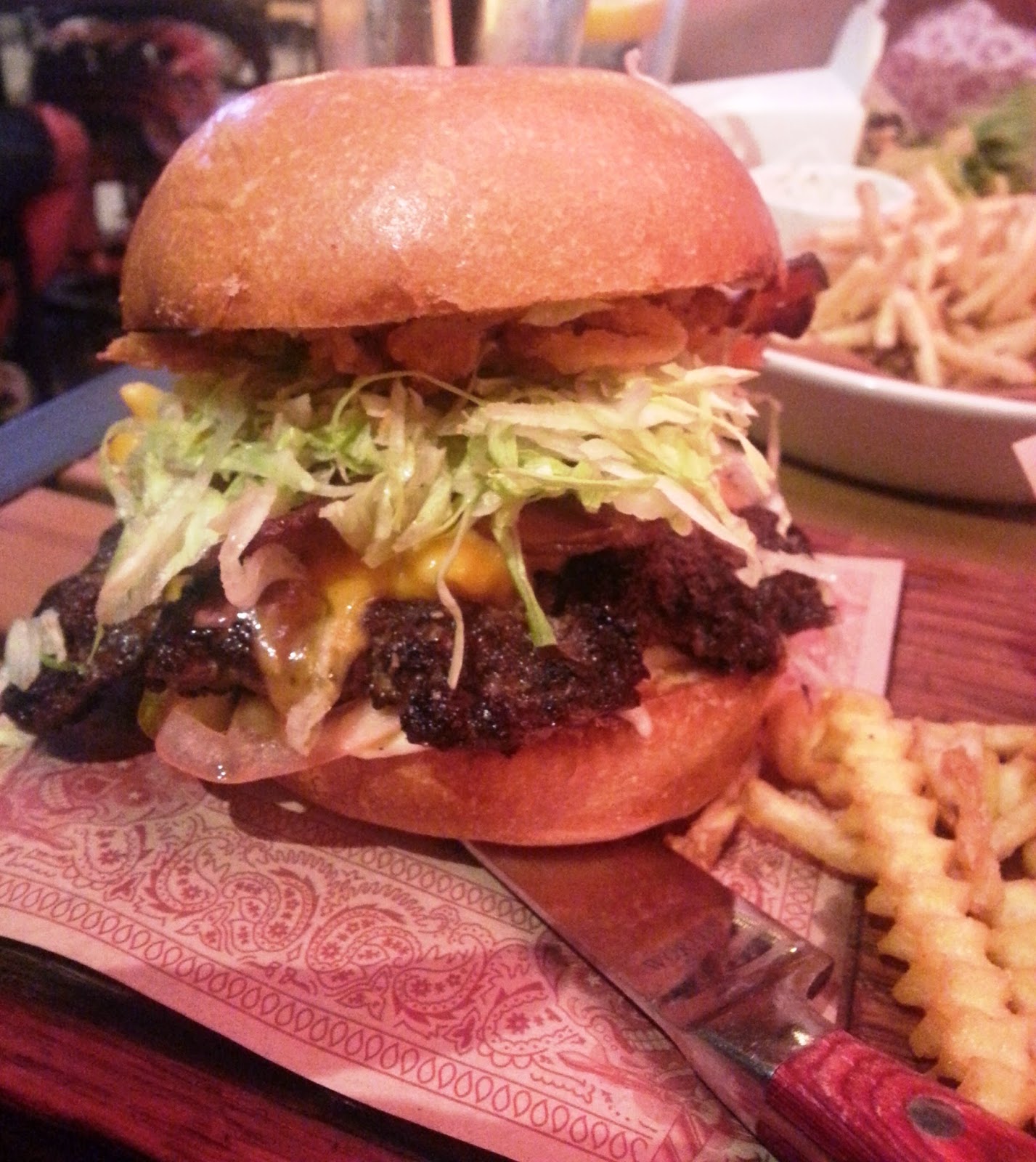 The menu says the burger is richly marbled 100%  USDA choice ground beef and is smash-grilled. The meat was topped with applewood bacon, a 6 cheese mac-cheese, and more melted cheese, lettuce, onion strings, and was on a toasted brioche bun.  This is one big burger, easily enough for two people.  Three types of fries were included with a Jalapeno ketchup.  The burger really was too thick with all the toppings.  There was no way to grab it and eat it as a burger.  You had to sort of cut it in pieces.  The cheese was smooth and tasty but overwhelmed the flavor of the beef.  The bacon was more chewy than crisp.  We ordered it medium and received well done.  Where we could taste the meat it was good and had a nice charred grill taste to it.  But one person in our party did not like it at all.  She didn't like the marbling, stating it was mostly a big piece of fat in her slice of the burger. The jalapeno ketchup was too hot and seemed like attempt to match the delicious Pub Ketchup served at Gordon Ramsey's.  We didn't hate the burger, but would not order it again, especially at almost 20 bucks.  We would love to see a good basic burger with a few flavors and one cheese or topping as a choice.  Complement and showcase the taste of burger, don't cover it up.

We wanted to try the chicken wings as they were one thing always recommended to us. We had the same dilemma as with the burgers.  Of the three choices of wings we weren't sure which one we would like. At another recommendation from our waitress we opted for the Fireball Whisky Wings ($15) as they were the most traditional style with classic buffalo sauce and an added hit of fireball whisky. It was served with a side of blue cheese-wasabi. $15 for an appetizer of wings seems a bit high, but this was Vegas pricing, and to be fair there was a huge platter of them.  More than enough for at least 4 people to share.  The wings were again good, just not among the best we have had. Would we order them again? Probably not.  The sauce was delicious though, and a side of veggies including cut up peppers, radish, carrots, and celery were a nice touch.

They have a nice selection of draft beer including several craft or mico-brews, all surprising priced from $6-$7.50. 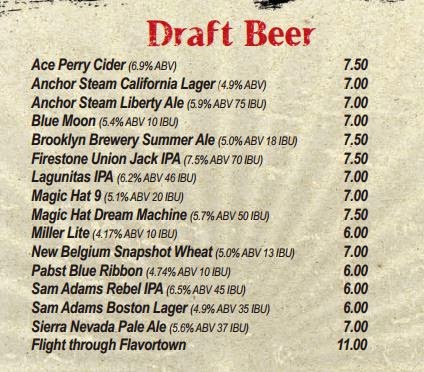 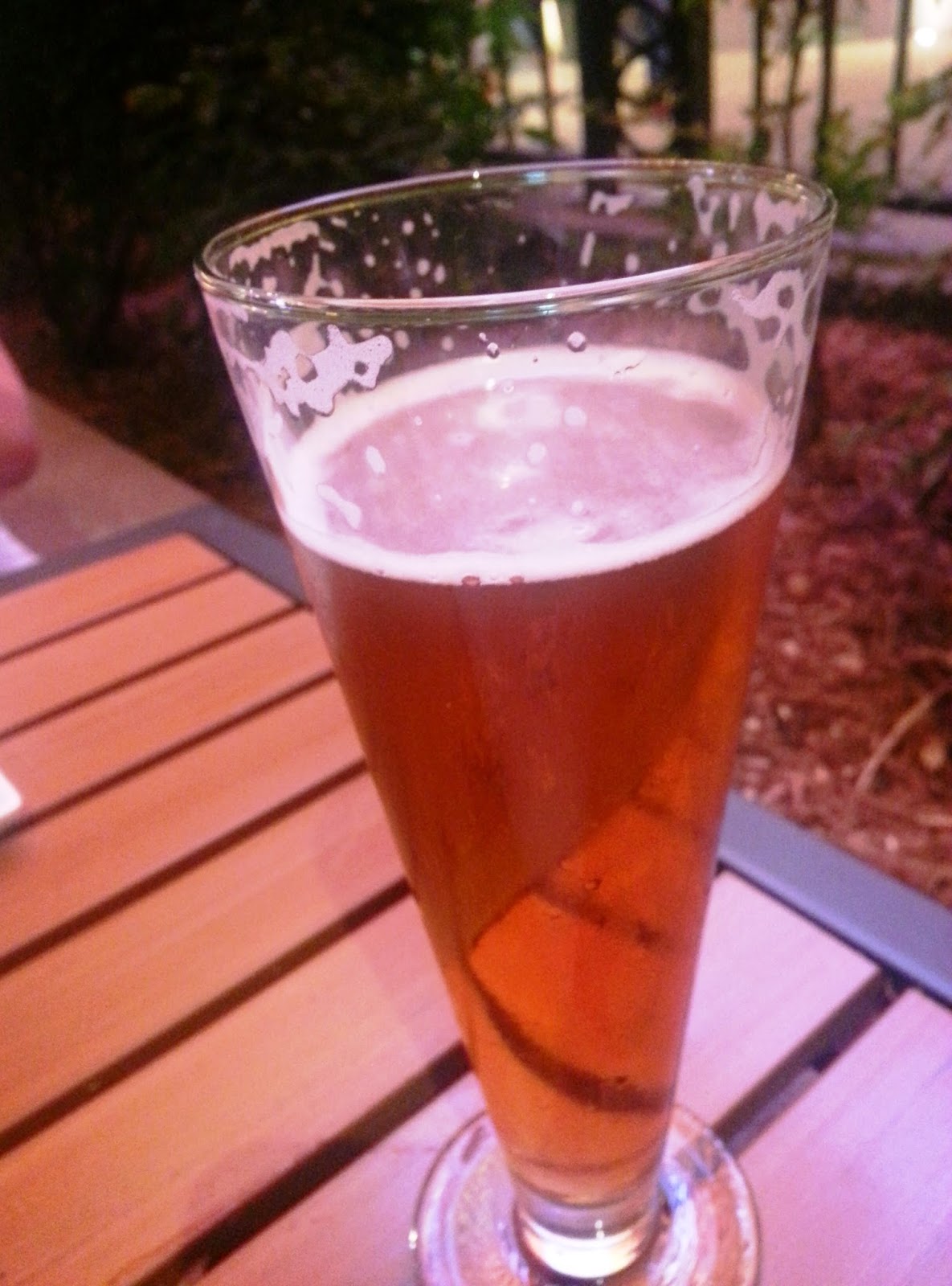 The Anchor Steam California Lager was our favorite of those we tried.

Frozen Shots are also available.  They looked tempting but we did not try one. 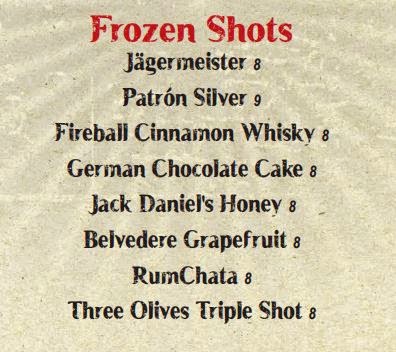 Other signature cocktails are available at $12 a piece.  The bar menu is one you can easily run your tab up quick with the easy to drink cocktails at that price. The favorite we had from this list was the Austin Sweet Tea (Deep eddy sweet tea vodka, sweetener, white peach syrup, fresh lemon juice). 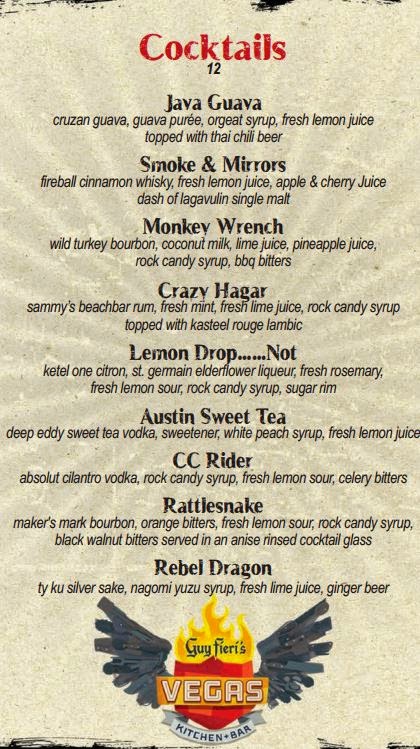 Portions were so big that even with sharing most of everything there was no room for dessert.

Even by Vegas standards we felt the cost and pricing was a bit high. If you do share items, and we recommend it, then it is somewhat reasonable in per person cost.  The atmosphere was nice, outdoor seating is available where you can hear the music from Carnival Court at Harrah's and do some good people watching. We doubt we will try this location in Vegas again.  Except perhaps for a draft and a app at the bar. The food just wasn't good enough with so many other options available in Vegas. 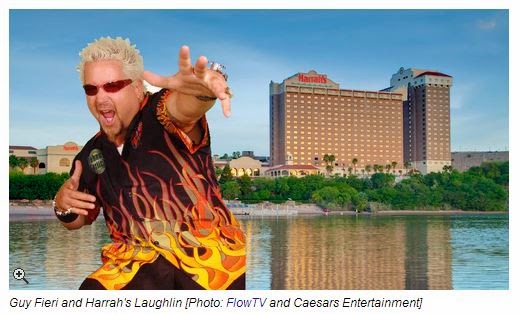 If what we saw in Vegas is replicated, it may not go over so well in Laughlin. Laughlin is not Las Vegas or even a mini-Vegas for that matter.  In the Laughlin market this is going to be a unique restaurant and the only "celebrity chef" spot.  Will that be enough for it to be a hit?  We hope so and will certainly try it.  We just think that if the prices and the overabundance of combinations and flavors are similar they might not appeal to a good part of the demographic who visit Laughlin.  We did see a few older couples come in, sit down, look over the menu, and leave at Guy's in Vegas. Still, the younger crowd and those who know of Guy Fieri will come and try it.  We think the selections on the menu, the prices and the quality of the food is going to be what makes it a hit or miss here.  They may need to have a few simpler items, and some priced more Laughlin-Style.  Especially, since Harrah's Laughlin is more of a captive audience, not accessible from the Riverwalk.  We look forward to seeing what they announce very soon.

Update 10/18/14 -  on the Laughlin Buzz Facebook Page  it was posted by Matt A., that the Guy Fieri Restaurant at Harrah's Laughlin will be Mexican Food themed and go by the name of "Borracho Burro"   Newest info is the offical name will be Guy Fieri's El Burro Borracho

Update 11/18/14 - Eater Vegas has reported that there may be a name change to Guy's Cantina. Read more here.

*If you are a Total Rewards Card Holder you receive a dollar off the regular menu price on most items. This does not include alcohol.

All content and pictures are presented for informational and entertainment purposes. The review was based on our own personal experience. Your results may vary. Time, events, menu items, prices, and dates are subject to change by the property responsible for them.  We are not affiliated with, nor receive any compensation from any of the properties or entities mentioned herein.