Welcome to our random observations and way-too-many pictures of the opening day of gaming at the Laughlin River Lodge.  Gaming started on November 1, 2014. 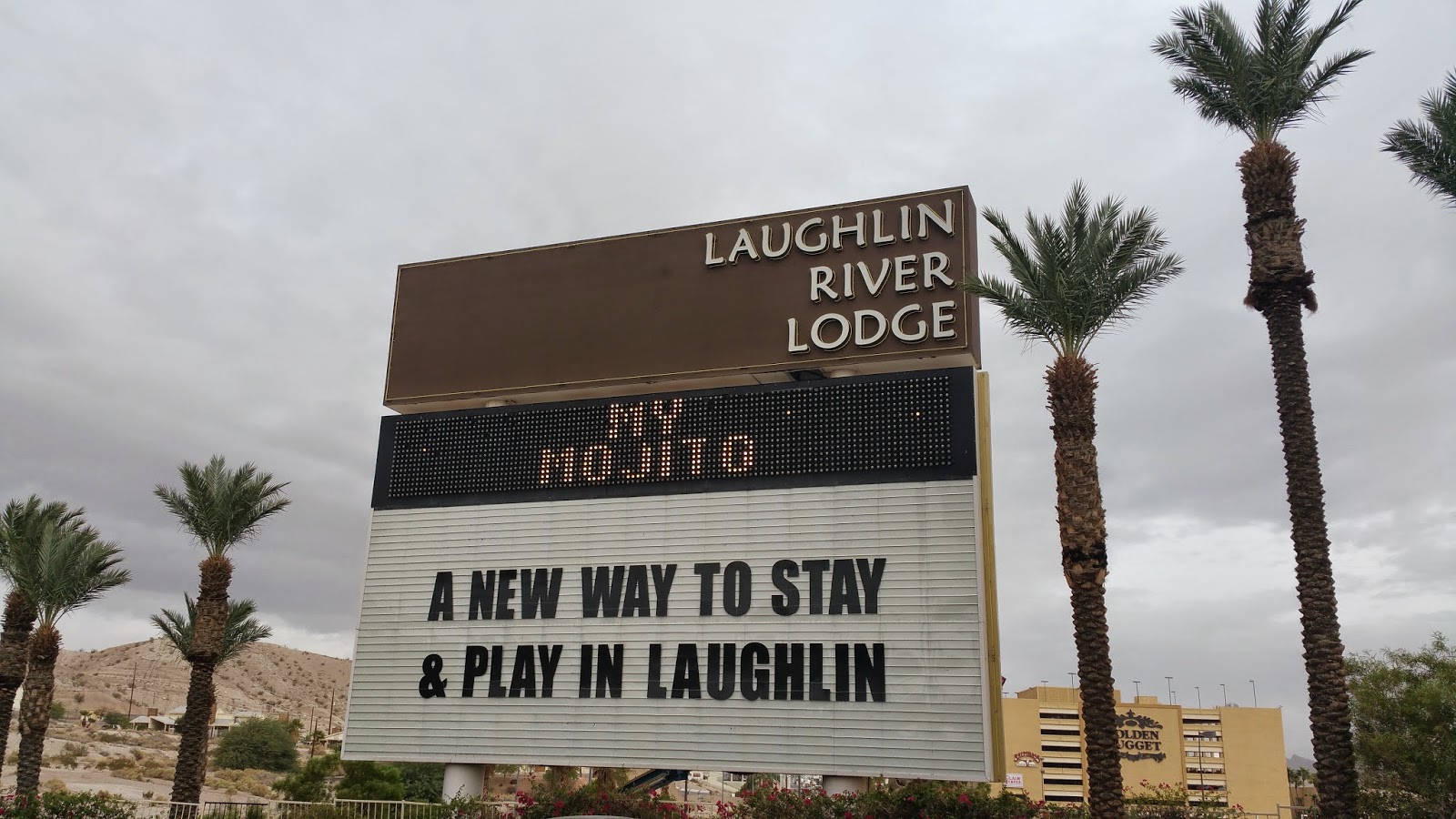 It was a cloudy, overcast morning and the new sign didn't exactly light things up. Yes, the words Laughlin River Lodge do light up at night. Hoping they are going to add something to it where all the blank space is.

We had heard the machines were going to be kicked on at 8am.  We enjoyed a walk up the Riverwalk from the Golden Nugget and arrived around 7:40. The slots were already on with some people playing. 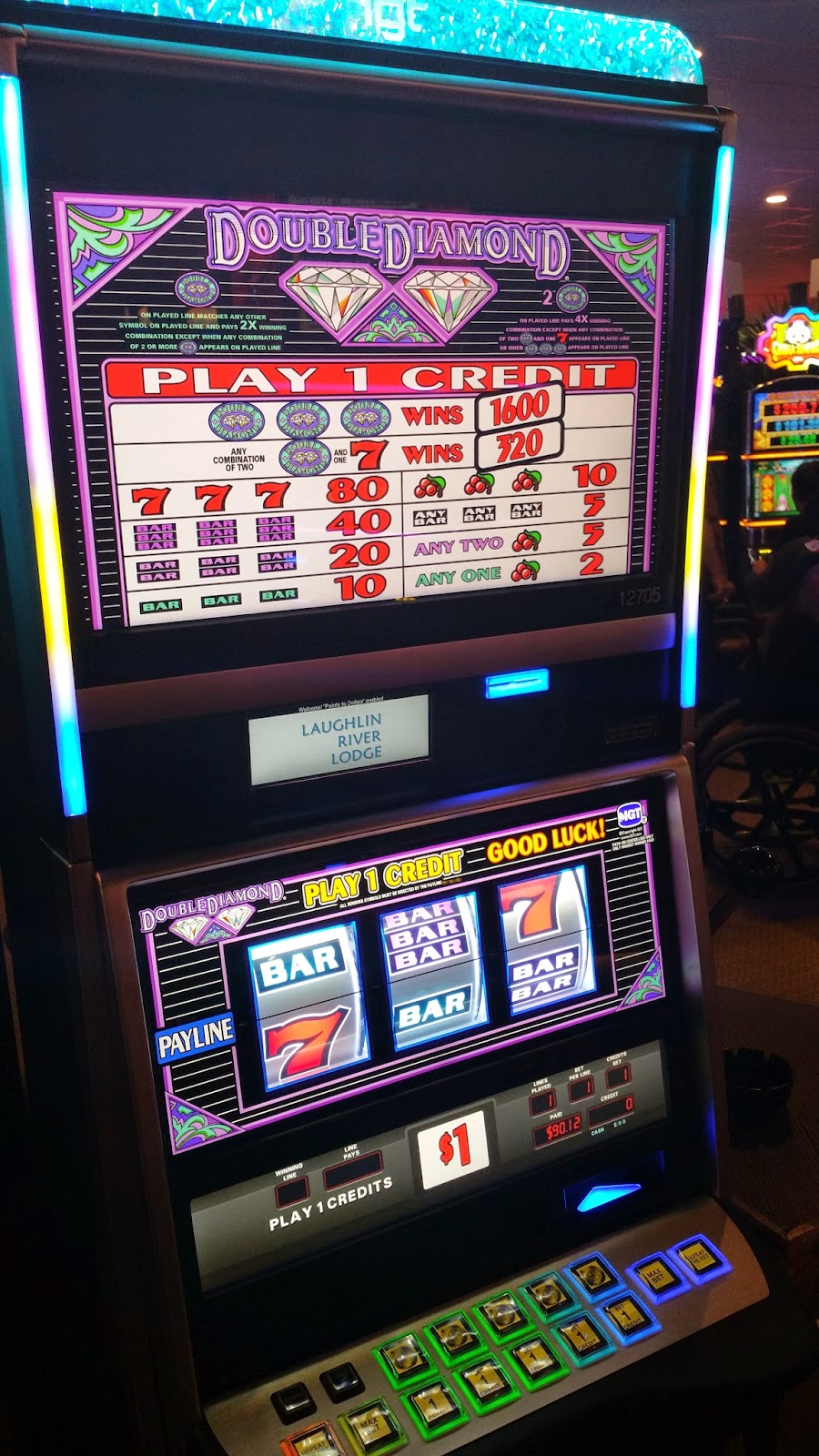 Most of the people were waiting in line at the Players Club.  In fact, the line was from the Players Club desk all the way to the main entrance over the course of the next 4 hours. We were told lines were long all the way through the afternoon.  Perhaps the management underestimated the number of people or just how long it would take to do the sign-ups. They should of had a couple days earlier in the week where people could of come in to get their card early and take a look around.  Offer them a tour, a free gift or something to beat the rush.

In our opinion keeping people who want to give you money (gamble) waiting in line for 1-2 hours to play is never a good idea.   This won't be an issue after this weekend, but was a bad start to a good problem of having so many people. Even on the second day when we visited again there was a wait in line but not as long. 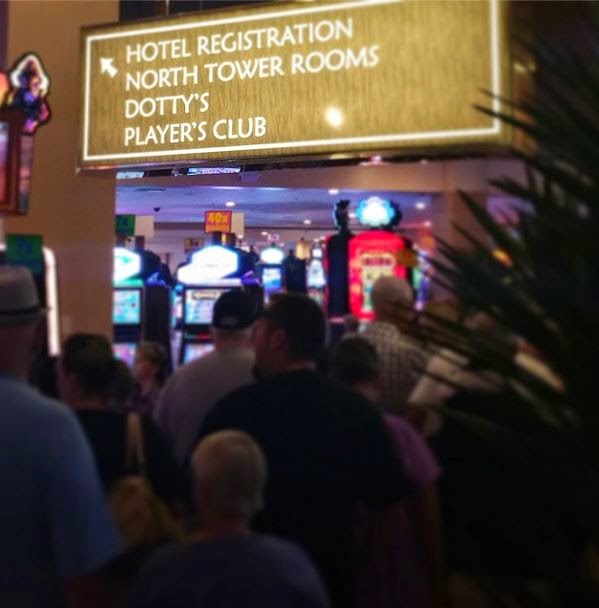 Staff and employees were everywhere being very helpful and friendly.  Free Dandy Donuts and coffee were given being passed out from carts. 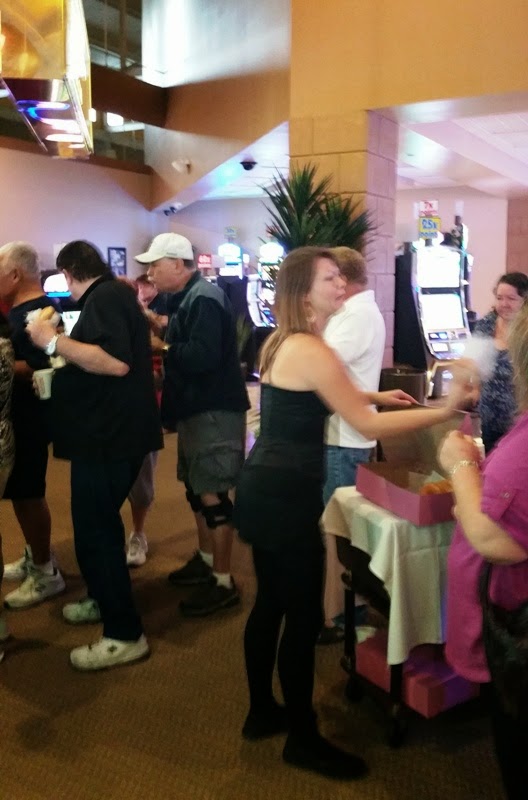 We had a Dotty's Card from when we visited the Casino in Boulder City. Dotty's are owned by the same company and are small neighborhood slot parlours all around Nevada.  Dotty's cards work in all the machines at the Laughlin River Lodge.  We did notice the cards being issued are different (blue) and work the same way.

We did notice as we were playing that you can redeem points right at the machine for Free Play.  Plus as you are playing from time to time a bonus will be given and you win additional free bonus points.  You can also redeem your points for cash back or prizes (see below).  As more details on the club are found out we will post them.

Behind the players club desk they had it filled with merchandise with point values attached.

It looks like the Chuck E. Cheese's redemption desk for Gamblers. 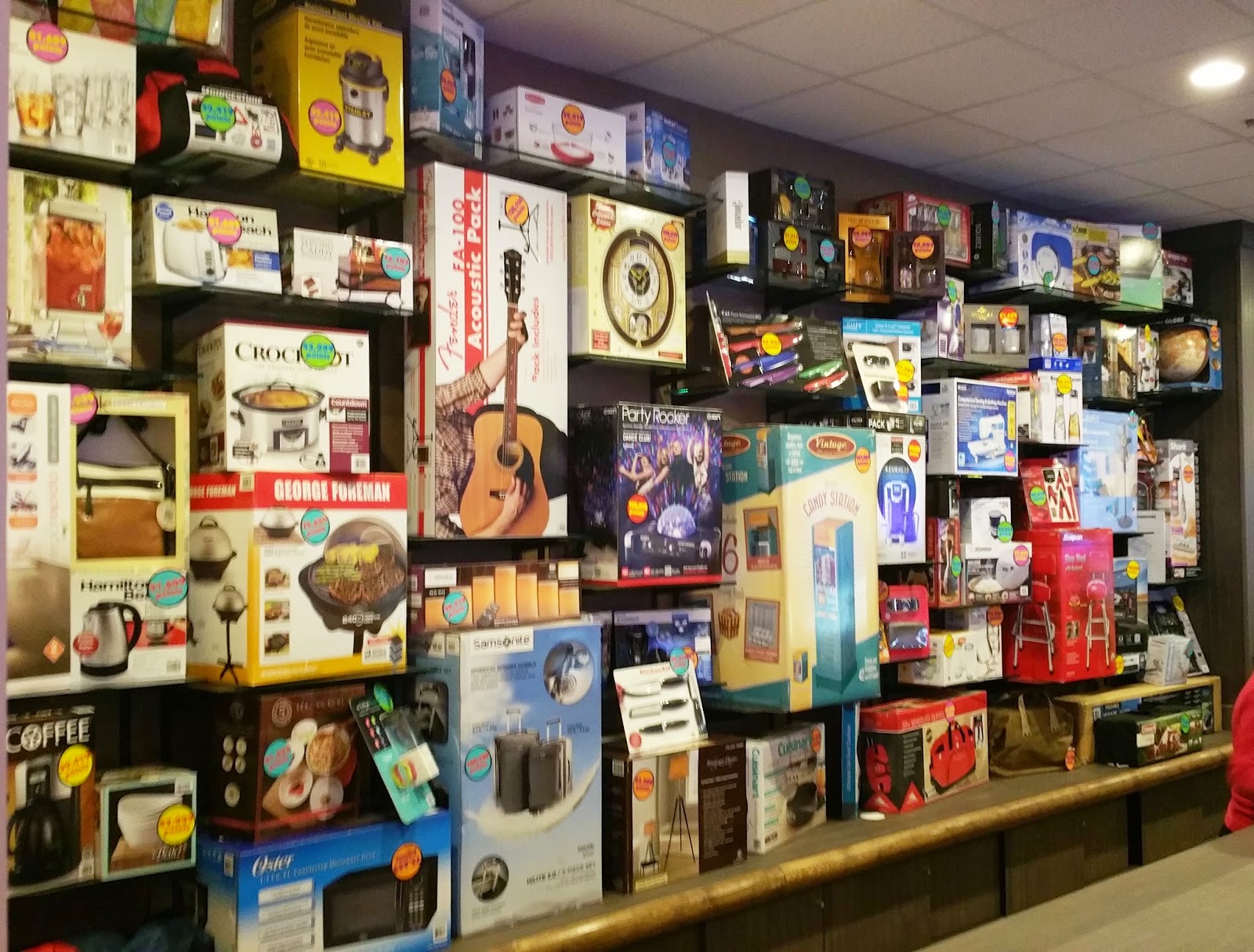 We noticed most, if not all, of the machines on the main floor had signs on them with an X factor of how many points you earn playing them.  Ranging from 7X to 100X.  We are not sure if this is a promo for the opening or if this will be an on-going thing.  It did make us wonder if the X factor had an correlation to how well the machines payout.  Especially since in a bank of similar machines we saw different point values. 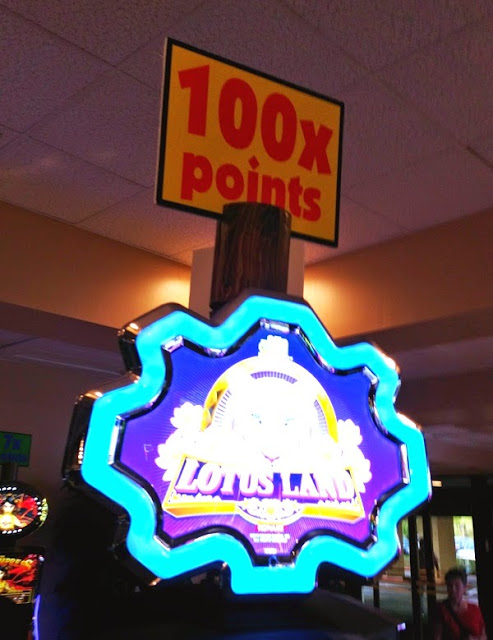 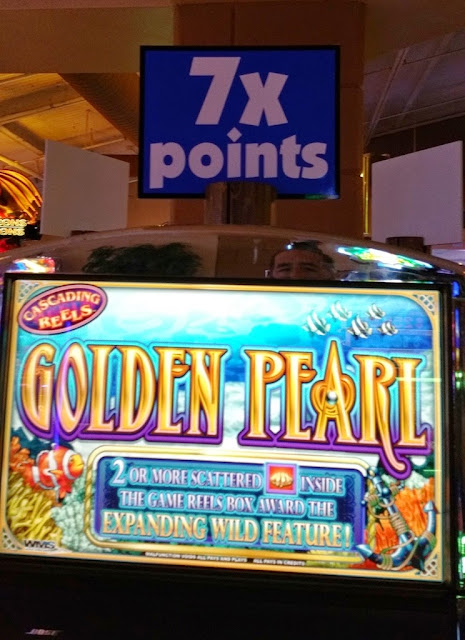 The gaming floor is basically divided into 4 areas.  The main floor, a non-smoking section, and two self enclosed (behind glass doors) Dotty's rooms.

All slot machines no matter where they are located use the same players card.

Dotty's 1, as we heard an employee call it, is where the old Bingo room used to be at the River Palms. This is just beyond the registration desk and non-smoking area.  As you can see from the picture they have an area of their counter inside selling a large assortment of cigs at fairly low prices of under $5 a pack. We are non-smokers but have seen cigarettes going for up to 10 dollars a pack in other Casinos.

We had originally thought one of the Dotty's rooms would be non-smoking but neither one is.

At the Dotty's counter a customer was buying cigarettes and they only took cash, no credit or debit cards.  Maybe this was a opening weekend thing and they will be later taking cards. 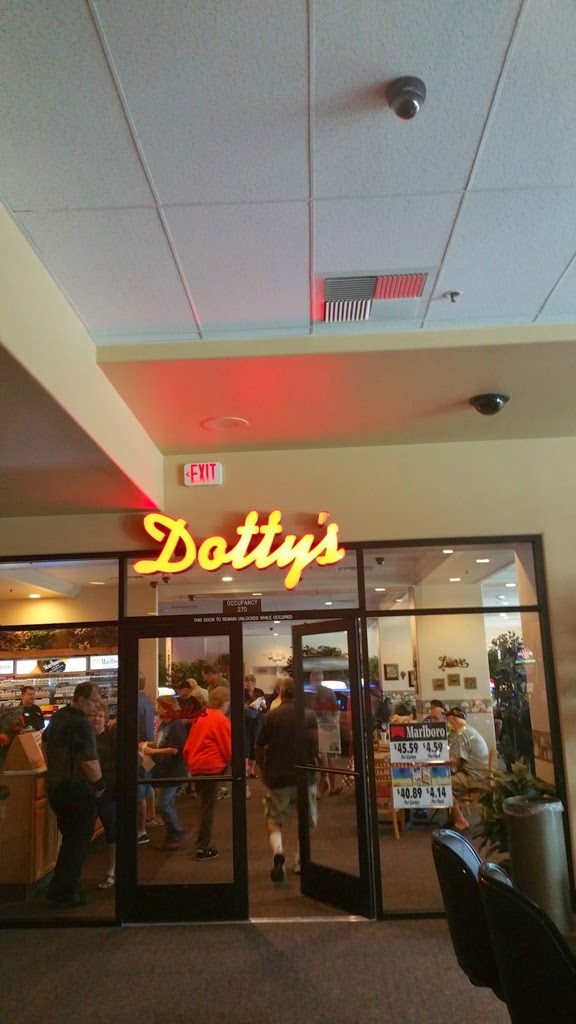 The other Dotty's room is just beyond the Rivers Bar.

This is the first one you see from the main floor. 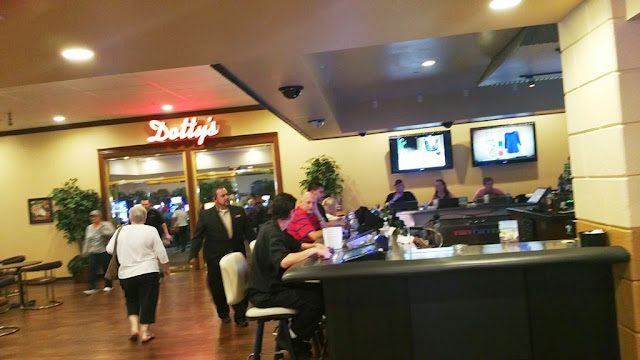 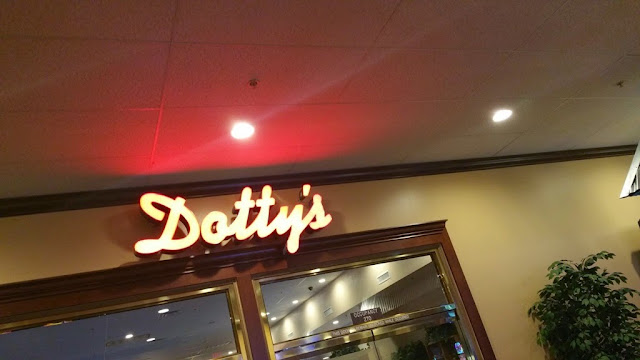 Both Dotty's rooms are similar with a counter filled with beverages, snack items, etc, that are available for purchase.

Drinks are complimentary for players. As are the snacks in the glass containers on the front counter. 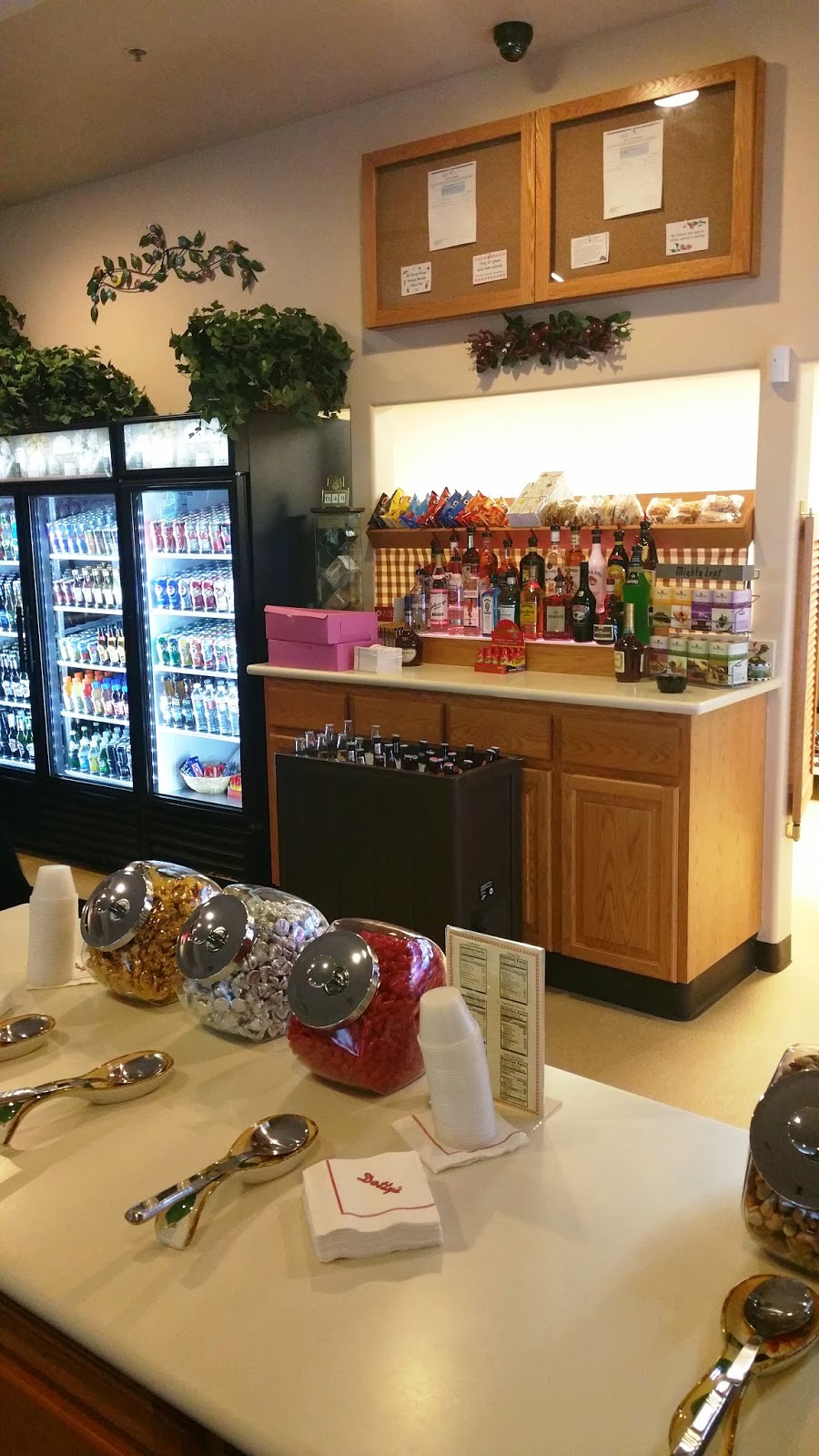 Waitress service while playing was very fast, friendly and they have a good assortment of beers and drinks available.  They are complimentary while playing.  Make sure you tip, it's not only the right thing to do, but also good karma!

The decor, especially in the Dotty's rooms, has been called a Granny's motif.  Apparently all Dotty's are look very similar throughout Nevada. 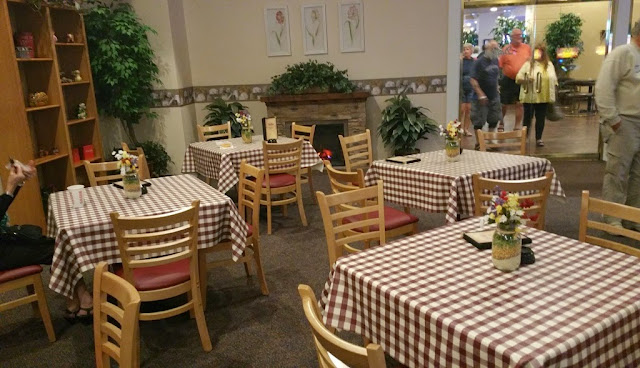 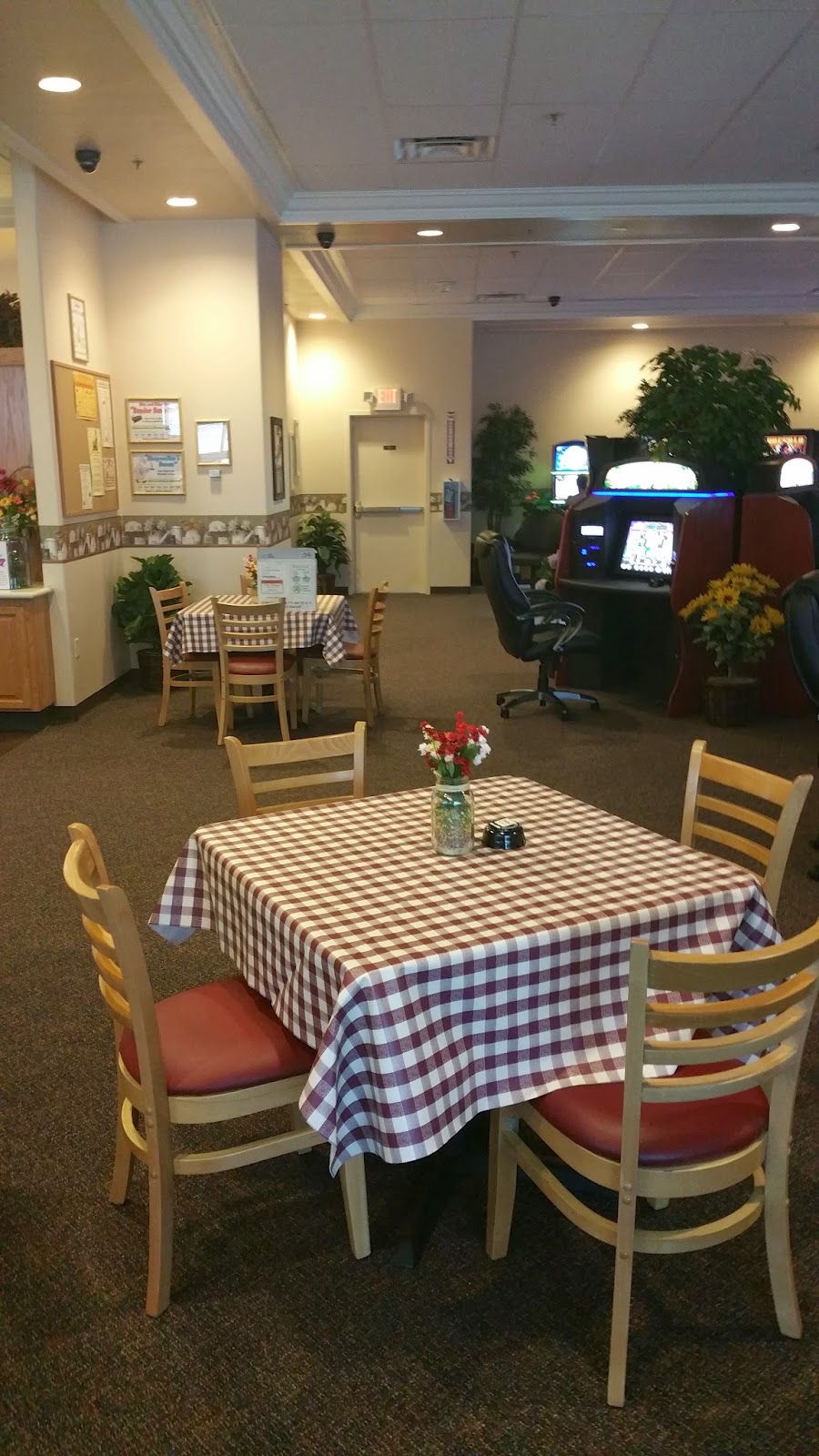 Tables, shelving filled with homey style knick-knacks and decorations, plants are all about.  There is even a fake fireplace in both Dotty's rooms. 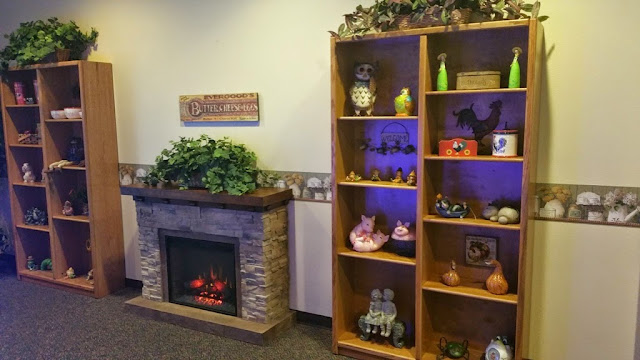 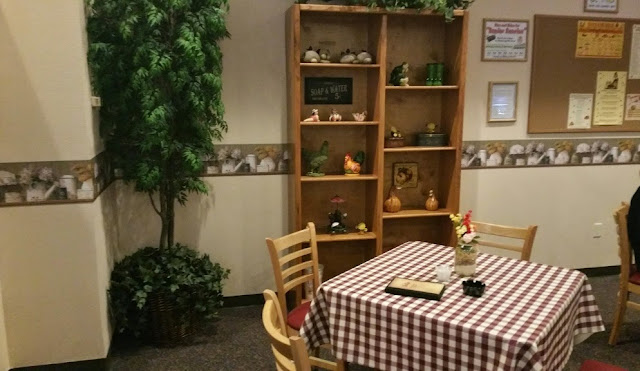 Even around the machines in various places they have plants and flowers (fake). 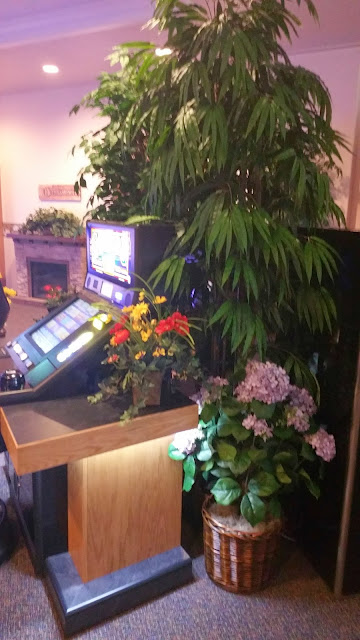 They have a beverage menu on each table in the Dotty's rooms.   Since drinks are complimentary for players, we aren't too clear on what the tables are for or if how much drinks would be for someone just sitting there.  The menus have no prices.  When it is less busy on our next visit we will find out. 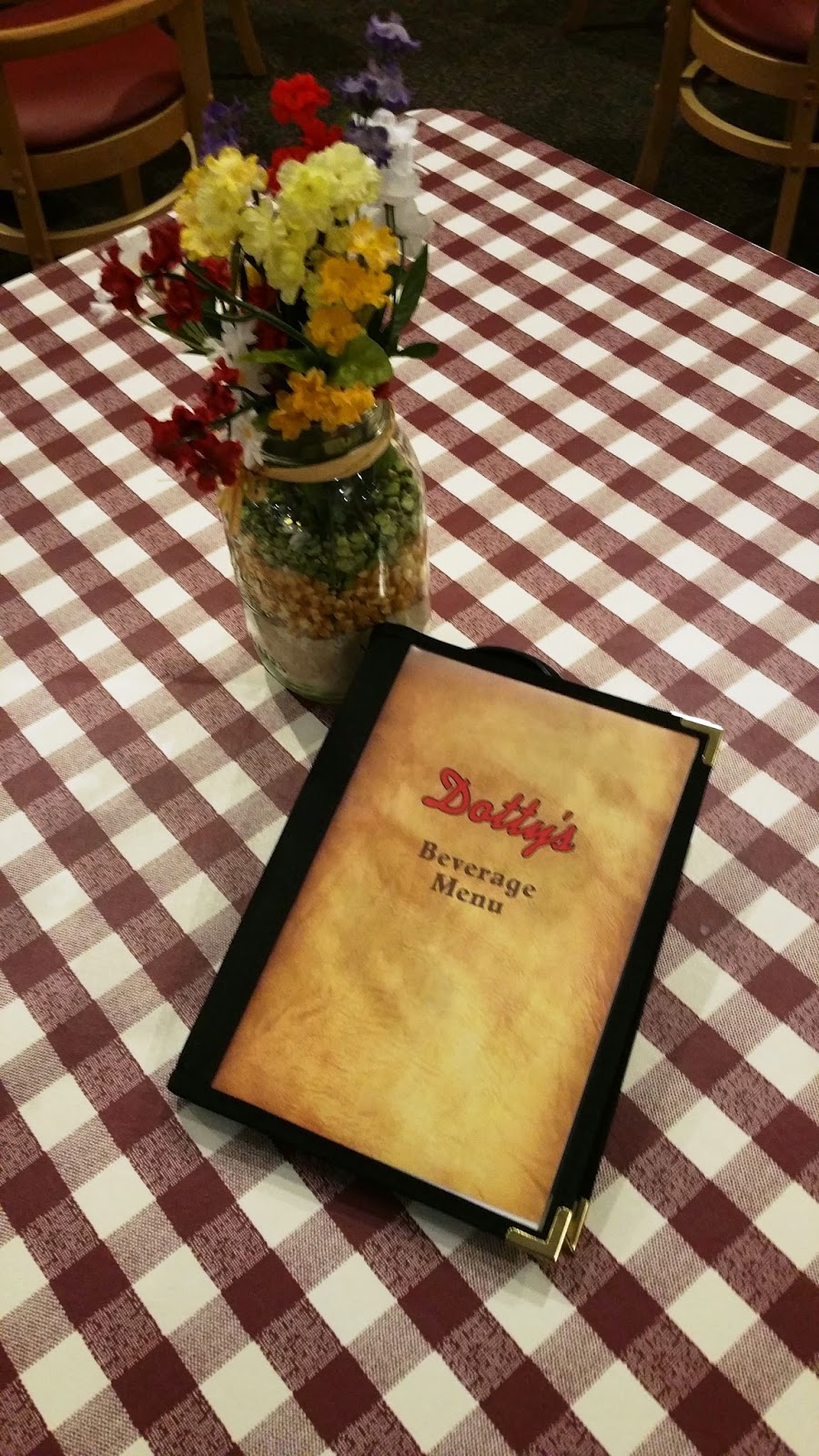 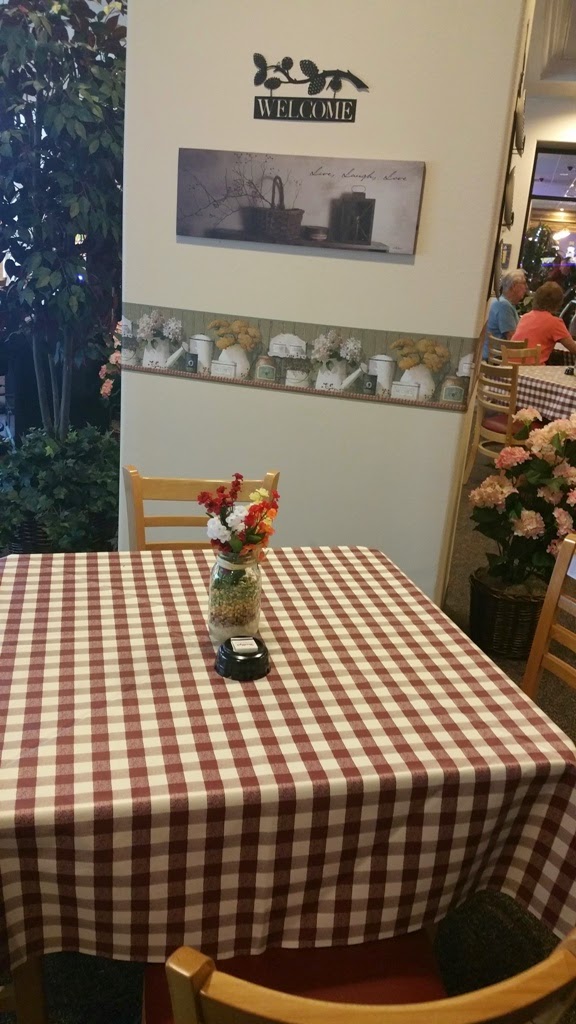 The main floor and non-smoking section has the majority of the slot machines. 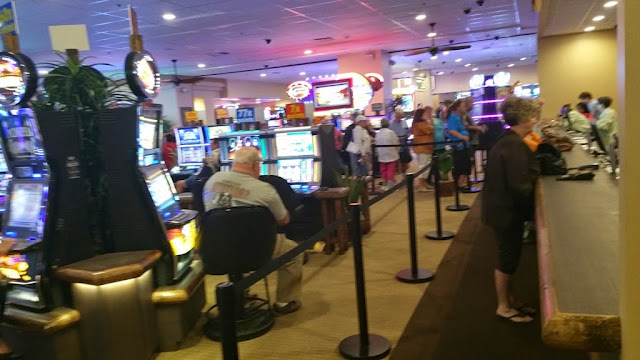 We noticed a nice feature that we have not seen elsewhere in Laughlin: Self-Serve soft drinks and coffee.  This is located by the players club.  Hopefully this is something permanent and not just for the opening.  The waitress service will still bring you coffee, soft drinks or other alcohol beverages as you are playing on the floor. 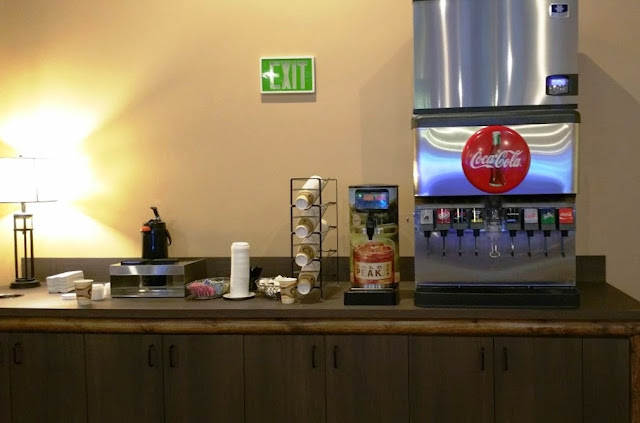 The non-smoking section is just past the registration/check in desk.  There were no lines on opening day. 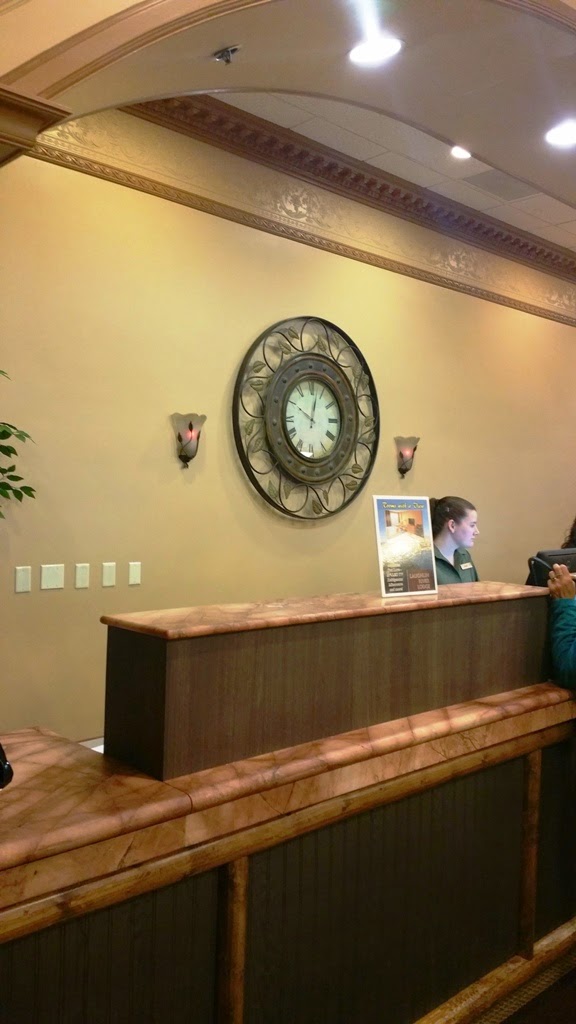 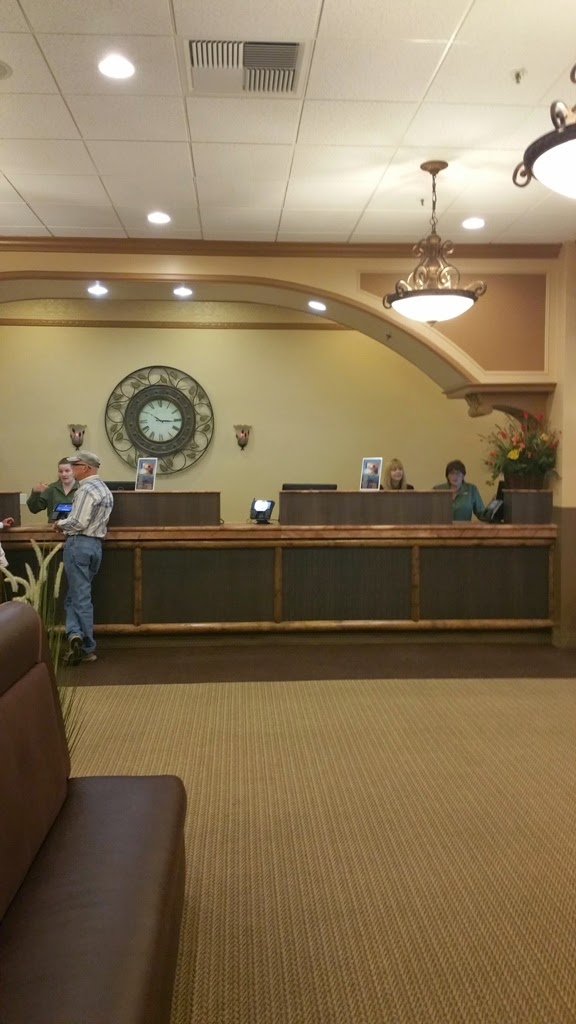 While sitting briefly on the sofa shown below (in the non-smoking area) we did pick up a "Free" wifi signal.  We did not try it elsewhere besides right by the check in desk so are not sure if it is available on all of the Casino floor.  We also heard that a wifi signal can be picked up in the Lodge restaurant. We didn't verify this.  One of the amenities for the Riverview rooms is free wifi with the room. There are fewer slot machines in the non-smoking area but still a good number of them.  Non-smoking is sort of a misnomer because there is no true separation from the smoking area and the non-smoking area other than some empty space.  At least if this is something you care about there won't be anyone next to you or close by smoking.  This part of the Casino has the best view.  You can play and  enjoy the serenity of the River. 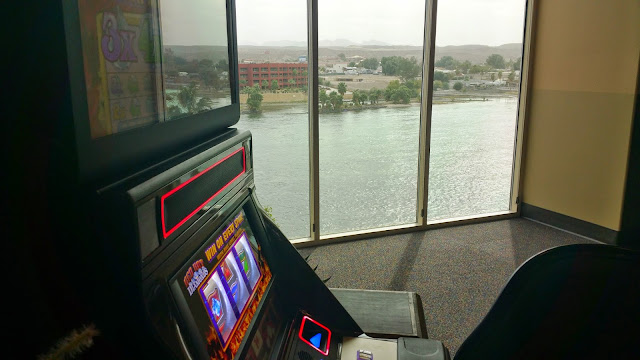 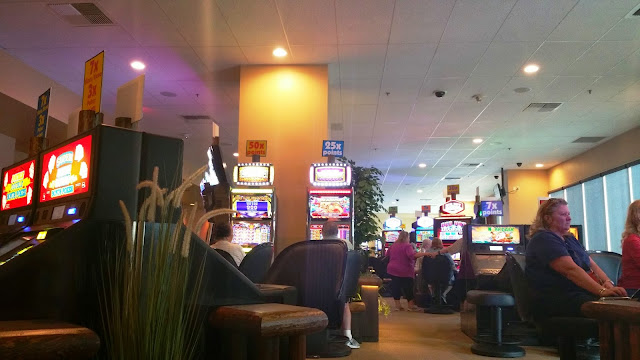 We weren't even aware this was the non-smoking section until we overhead an employee ask another employee.  Then we noticed small signs on the walls.  They might need or want to put a bigger sign just before the entry area of the space. 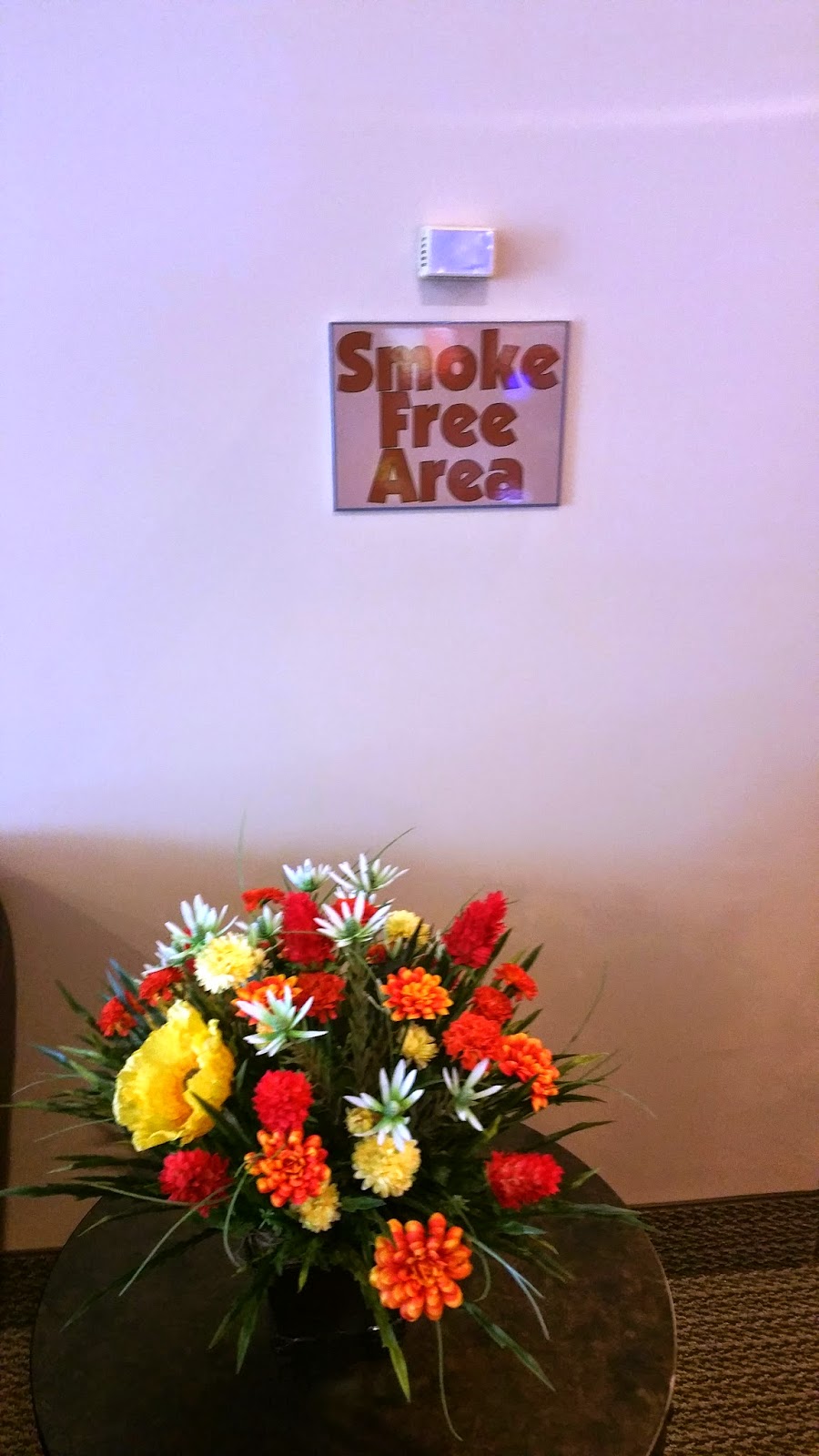 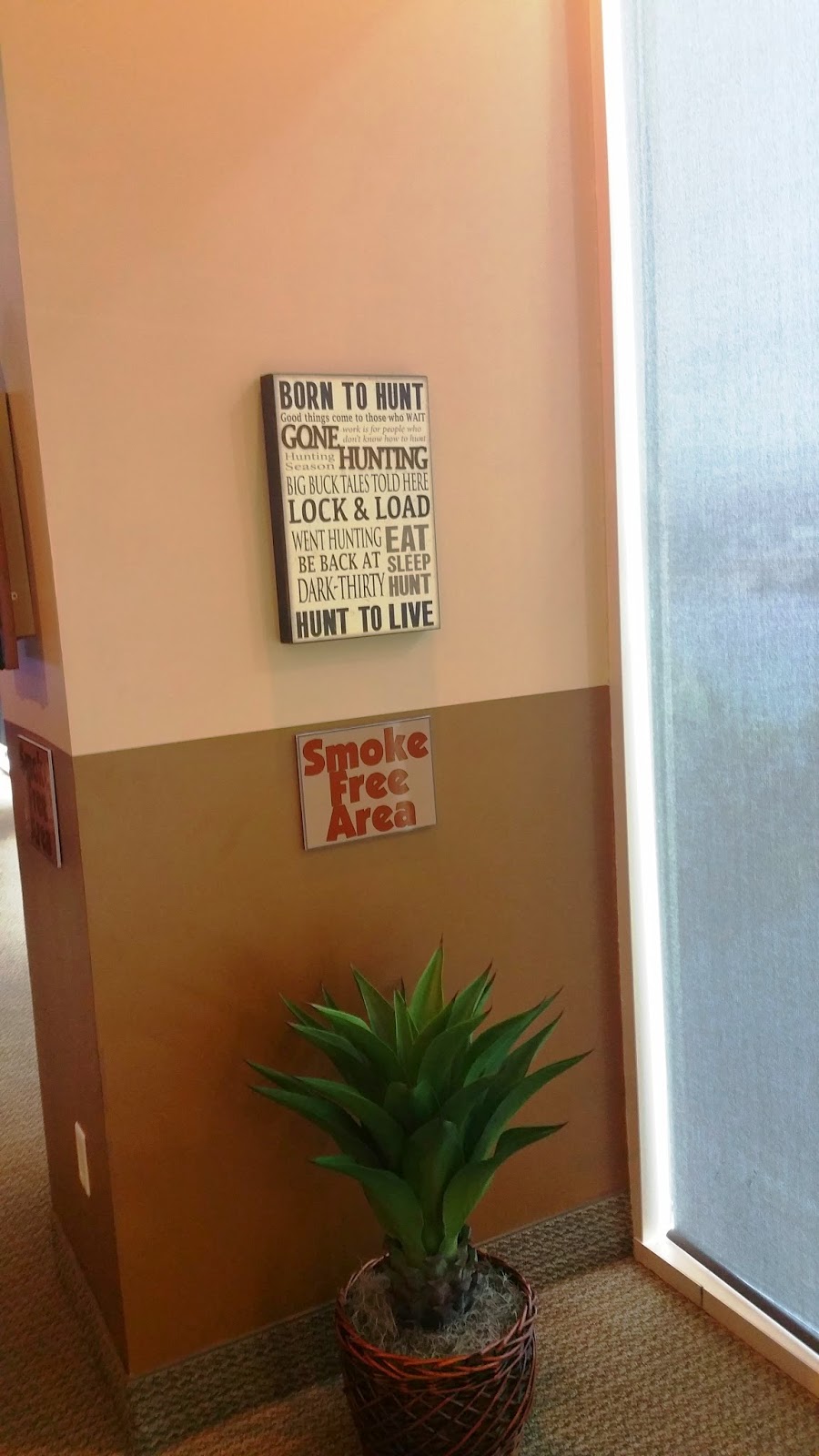 *All content in this blog post is presented for entertainment and informational purposes only. Dates, times, prices, amenities and other descriptions are subject to change and are the sole responsibility of the owner. We receive no compensation from the properties, events, sponsors, groups, organizations, or restaurants mentioned or pictured in this blog post and are not in any way affiliated with them.   Certain details Photos were taken by Laughlin Buzz. Opinions remain our own. You experiences may vary with your own personal tastes and likes.

Posted by Laughlin Buzz at 2:20 PM